What can we do about surly urban teens? A dose of generic muck savagery will sort them 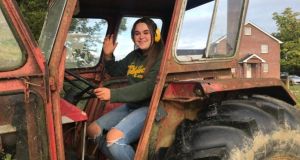 Finally, the Stickies at RTÉ have recognised that large urban settlements have been a terrible mistake for the Irish people and are sending townie teens into the hinterlands as farm labourers. There they will be toughened up and bolstered by peasant wisdom. It’s Mao by way of Nationwide. The Culchie-eral Revolution, if you like. Dev, when not being erotically delighted by the catechism and crossroad infrastructure, would have loved it. Yes, Raised by the Village (RTÉ 1, Sunday) has a wonderfully dubious conceit but it does, in fairness, turn into something sweeter and more touching in the execution.

In contrast, rural life has long been a sanctuary for outcasts and those who are different. You’ll know this from reading the works of Edna O’Brien or William Trevor or by watching the documentaries Deliverance and The Wicker Man. The general gist of an episode of Raised by the Village is this: Two phone-addicted, door-slamming teens are too much for their hapless urban parents. These poor schmucks are at their wits’ ends. “What can we do about our surly teens?” their expressions seem to say.

“Have you considered televising them?” asks a passing television producer. And thus the proto-adults are dispatched with licence-fee money to a rural idyll where the love of a parent is replaced by the askance collective eye of a bypassed village.

Okay, my first disclaimer: These are always nice kids. They’re a bit confused and they’re hurting but that is the human condition, amplified slightly by having no control over their lives or time or money (ie, being a teenager). The worse they do is give cheek, lose their tempers and underperform at school. If they were at Eton they’d be prime minister eventually.

My second disclaimer: the families they stay with are good people – kind and patient with a lot of empathy and time to give to these slightly baffled children.

Nonetheless, there’s a fierce bang of rural revenge around this show (well, rural revenge and slurry). “You think you’re very sophisticated, that those boggers down the country haven’t a clue,” says one farmer, as he anticipates the attitude of his teenage charge.

Every week the teenagers acclimatise to their new surroundings while their rural teen counterparts whisper darkly about a previously unheard-of time in the morning called “six o’clock” and the more lax child-labour laws facilitated, no doubt, by the fact rural Ireland is still governed by Brehon Law. Much is made of the teens getting no screen time, which basically means that the Government’s policy around rural broadband is a waste of time. “The only screen time we’d have is looking through the windscreen of a John Deere tractor,” says the farmer with luddite satisfaction. It makes me like him, the big culchie.

The urban teenagers are soon being appalled by what, I think it’s fair to call, is generic muck savagery. This week, for example, we see one teen, Adam, standing filled with ennui in a milking parlour as cows on all sides of him poo themselves without nappies or shame. If this was an art installation I’d call it “UK Foreign Policy” .

Meanwhile Carly from Dundalk is given a bucket of feed to distribute and is chased by sheep. Then she has to put up with some donkeys riding one another. Yeah, that’s what passes for entertainment in the countryside. In Dublin there’s broadband and those nude donkeys would be forced to wear slacks. I’ve been to Foxrock. I’ve seen what things are like there.

The teens slowly learn their hosts’ strange rural ways. There’s a local festival and Adam must don the costume of a terrifying local folkloric figure (okay, apparently it’s Woody from Toy Story). He is then set upon by thuggish infant yokels, which is upsetting for all concerned.

Carly, on the other side of the village, must go to a country manor to meet Lady Kilbracken and to learn how to chop wood. Not only is Carly sojourned in “the country” she’s also apparently in the 19th century.

And slowly they flourish. Carly in particular radiates empathy and kindness when she joins a local Meals on Wheels delivery and she bonds movingly with beekeeping host-father Donal. Adam never quite puts aside his discomfort at what is, let’s face it, rural barbarity, but he is inspired by a cowboy-hatted millionaire horse-breeder who lives nearby.

The point is, watching teenagers finding purpose and self-esteem while being praised by kind-hearted adults is inherently affecting. Teenage vulnerability is affecting all by itself, to be honest with you. Seeing Carly smile when Donal tells her she’s a clever girl is worth the time put into the show on its own.

Each show ends with a snapshot of each youngster after returning home, smiling, and with a newfound commitment to school and career. It’s usually the same sort of thing. They never say, “Driven mad by the smell of cowshite, Desmond is now a hitman for the Kinahans.”Or, “Having been made to milk a cow, Sheila is now a Fine Gael junior minister and vows to pave over rural Ireland when given half a chance.”

Because of course the kids respond well. Like many other reality television programmes, the high concept is beside the point. What we are seeing is what happens when attention and resources are lavished on teenagers. I’m not sure rural kids are really happier than urban ones or that the rural locations are quite as essential to the therapeutic outcomes as the format leads us to believe. All we need to do to make sure the kids are all right is to get a village worth of resources and adults to look after them. In other words, we should become socialists.

Over on BBC1 we get a glimpse of British rural types in Antiques Roadshow (BBC1, Sunday). An Irish version would see presenter Fiona Bruce and her cadre of travelling eccentrics bombarded with Declan Nerney tapes, embroidered images of JFK’s face and weaponry that missed the last round of decommissioning. The rural heartlands of Britain, on the other hand, offer up jade sculptures, Burmese decorative swords, family oil painting and rare first editions. Yes, you get higher quality tat when you once had an empire. Everyone on the show nonetheless does their best not to look disappointed as the experts evaluate these precious antiques (anything under £100,000 is disappointing to my ears). They should be grateful. Soon the post-Brexit provisional government will be requisitioning it all and trading it for antibiotics and grain.