‘They’re all wearing lederhosen. Brexit has gone more or less as expected’ 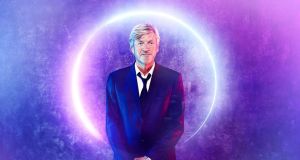 Since writing about it last week I have started to love Channel 4’s The Circle. Eight people are holed up in flashy apartments in a block much like the one from JG Ballard’s High Rise, in which everyone went violently feral and ate roast dog, or the ones Johnny Ronan wishes to build, in which the same things may happen.

They never meet each other in person and can communicate only via a “social media” platform called the Circle, represented onscreen by a fiery circle. The name is a nod to a post-literate future where all names are represented by simple geometric shapes. You know, like in that town where you live. And none of the contestants can access the outside world’s internet. The Circle is contained and boundaried, like the internet in China or the one Facebook hoped to set up in some developing countries.

He shapes his 'Judy' persona into that of a posh, blunt, judgmental wagon

All the contestants live alone in their apartments and voice their thoughts aloud, possibly because the producers have told them to, or possibly because they’ve all gone mad with loneliness. Maybe this is what young people do now that we’re all atomised by capitalism; they sit alone, narrating their lives aloud for whatever data company might be listening. The denizens of the Circle litter their sentences with hashtags and the word “babes” and verbalised emoji. It feels a bit like the slang from A Clockwork Orange and makes me get a bit “cryface emoji” when I’m not lmfao tbh.

My favourite contestant is charming, professorial ex monk Tim, who wears brightly coloured waistcoats and has a cat and old knowledge but doesn’t know hashtag etiquette. The narrator thinks this is hilarious: Look at him there, knowing stuff from the long ago like some sort of holy fool. Then again, Britain has undergone something of a dumbening since Lord Reith invented television.

Tim has formed a little group called “Scholar Squad” with a sincere and glamourous young woman called Brooke and another sincere and glamorous young woman named Georgina. Georgina even speaks bravely about her Crohn’s disease and posts a photograph of herself in a bikini with an ileostomy bag. There’s also a likeably goofy youngster named Woody who is the son of two big stars of the 1990s (Denise van Outen and Jar Jar Binks, I believe).

Not all of the contestant are who they say they are. “Sammi” is supposedly a young mother with an adorable baby, but is, in fact, a bearded chap who wanders around his apartment shirtless and audibly scheming – if there are two things young men hate, it’s “shirts” and “silence”. He is, I can tell, slowly beginning to think of himself as a young mother with a child.

There’s no such problem with Katie who, in a reverse Norman Bates, is pretending to be her son, Jay. Poor Jay. Katie clearly thinks her distant offspring is a big bald simpleton. Her version of “Jay” blunders into chats, telling girls they’re attractive, talking about how much he loves and respects his mother and revealing that he wishes to get hair plugs. “Me big, baldy foolboy. Need nice lady, hashtag ledgebag,” says Katie, more or less, when channelling Jay.

At the start of the week there’s a big distraction in the Circle. This comes in the form of daytime television’s resident sun king Richard Madeley. Madeley is a special guest and is given his own apartment, much like a French politician’s mistress. He is tasked with wandering from webchat to webchat sowing discontent, much as I am sure he does in real life. I’m glad, to be honest, that everyone else is catching on to what a menace Madeley is. Look at him there, writing a “novel” on an old-fangled typewriter (he might as well be weaving doublets on a loom for all this means to younger viewers), his hair gone blonde with age, laughing nefariously as he lies.

For yes, Richard Madeley lies. On this show he is pretending to be a young woman named “Judy” which is also the name of his real-life television wife Judy Finnegan. I’m guessing that, with his television mediated existence, the borders of reality are already a permeable thing for Richard Madeley. His assigned task is to be “blocked” by the other residents and so he shapes his “Judy” persona into that of a posh, blunt, judgmental wagon. Yes, I suspect there’s some marriage counselling on the horizon for Richard and Judy.

Madeley is very good at alienating people, even going so far as to insult Tim’s beloved cat for no good reason (it would be funny if Richard Madeley and the cat had “a history”; I wouldn’t put it past Madeley to be in a feud with a cat). By Tuesday evening the two most popular contestants, Tim and Georgina, decide to block “Judy” from the Circle. When this happens Madeley is permitted to stalk the waking world once more, but before he goes, he can visit one apartment and bestow the resident with immunity from future eviction. Moved by Georgina’s openness about Crohn’s disease, Madeley calls to her door. Georgina is very surprised. The last thing anyone expects to see when they open a door is Richard Madeley (except for Judy Finnegan, God love her). Madeley sits down with Georgina and says kind words about her bravery. When he leaves she weeps. It’s quite sweet actually, though it’s hard to tell if Georgina is crying because of Madeley’s words or because she’s just had unmediated contact with another human.

With Madeley gone, I zone out for a moment and when I zone back everyone is alone in their apartments wearing lederhosen and Tyrolean hats and quaffing German lager. “Brexit has gone more or less as I expected,” I think, but, when I flick over to BBC’s Newsnight, nobody on the panel there is wearing lederhosen. I flick back to The Circle and realise that the Teutonic costumery is actually part of an oddly-themed celebration of Brooke’s 25th birthday.

A big birthday card has also been handed from apartment to apartment and signed by the various guests. They instantly begin analysing each other’s handwriting. Poor Katie. She might as well have signed it “Jay’s mum”, for all the ways her calligraphed, perfume scented handwriting resembles that of a laddish young builder. Tim figures it out, but Tim can recall the forbidden booklearning from before the Dumbening. He’ll be made King when he gets out (or Kaiser, possibly). Maybe that’s what the prize is? (It’s actually £100,000).

All in all, The Circle is a weirdly good-natured programme. Its artificialities reflect everyday online discourse, and I guess, within all that, some of us have learned new ways to be our true selves. On the other hand, unlike online discourse everyone here seems largely well meaning and kind. Except for Richard Madeley, of course, who is once again on the loose. Lock your doors.