Patrick Freyne: Britain’s Got Talent is making me want a no-deal Brexit

Britain’s Got Talent: The Champions: Union Jack thrones, dancing beefeaters, someone dressed like the queen. Maybe it is the queen 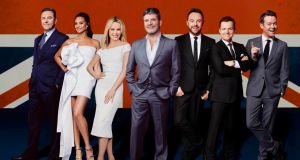 Britain’s Got Talent: The Champions: the four horsefolk of the A-pop-alypse and diminutive chuckle-monkeys Ant and Dec. Photograph: ITV

Britain’s Got Talent: The Champions (Virgin Media One, Saturday), a show featuring winners from various international Got Talent franchises, begins with diminutive chuckle-monkeys Ant and Dec descending from the rafters sitting in Union Jack thrones flanked by dancing beefeaters and introduced by someone dressed like the queen. Maybe it is the queen. Boris Johnson probably told her this is parliament.

Sitting facing the stage in judgment are the four horsefolk of the A-pop-alypse. There’s Little Briton David Walliams, who sits giggle-smirking like the doomed offspring of Frankie Howerd and a Clanger; and Alesha Dixon, a husky-voiced crooner from the girl band Mis-Teeq, who looks slightly startled. This may be because Hannibal keeps knocking her unconscious whenever the A-Team need to get on a plane (I may be thinking of Mr T not Miss-Teeq).

It is said that fame is a mask that eats the face. This is the chirpy mantra of the third judge Amanda Holden, and she repeats it often and cheerfully. She, or the being who now lives within her perfect porcelain skin, peers out at the world in judgment, occasionally leaking from the eyes.

Cowell’s face is what happens if you put an old Russian peasant woman’s cheeks atop Desperate Dan’s chin, then add the tiny eyes of a prawn’s and an eldritch Stickle Brick for hair. You’ll know this yourself, of course, from the bestselling book How to Build My Face by Simon Cowell. Unlike his elegantly garbed fellow judges, Cowell is rich enough to dress in just a woolly jumper pressed directly to his skin in a manner that makes me feel itchy (I deduce that he’s wearing nothing under the desk, much like my favourite honey sommelier, Winnie the Pooh).

The contestants on this show have already become clogged in the digestive tract of “reality”, so the judges largely utter pre-programmed, ritualistic phrases from the Book of Common Praise. “This is why we made this programme!” and “I like you” and “May I decant your fluids and consume your essence?”

The first performer, George Sampson, is a former BGT-winning dancer who this week demonstrates his tragic story in dance, from his origins as a child hoofer to an ex-child with a back injury to an ex-child endangering his back once more with further hoofing. “It’s almost as if you were dancing for your life!” says Alesha Dixon, as if she didn’t know that this is how people access food rations now.

“You’re the real life Billy Elliot, ” says David Walliams. “At the end of the film he has turned quite literally into a beautiful swan and that is exactly what has happened to you.”

After George becomes a terrifying swan-human hybrid, the Antipodean talent-possessor Bonnie Anderson has a nice sing. Since winning Australia’s Got Talent, she has experienced much joy (acting on Neighbours) and much heartache (touring with Ollie Murs). Then child sorceress Issy Simpson terrifies everyone with a complicated card trick, a picture of her dog and an entreaty to “be kind”. Later, a sibling duo perform death-defying rollerskate dances in which one sibling twirls another around by the feet and then the hair (standard sibling behaviour where I come from). And Slovakian dancers the Mirror Family wear mirrored costumes and thus capture the judges’ full attention. “My beautiful face,” murmurs Cowell, entranced by his own reflected visage.

There’s also a mime called Tape Face, but the judges stop the audience from beating him to death and he is whisked to safety. And Stavros Flatley, a large topless father-son dance duo in golden wigs, perform an inept yet comic Riverdance pastiche. This act – whom I prefer to call “current British foreign policy” – impresses Simon Cowell, so much so he hits a golden buzzer. That means the pair has been specially selected to be burned with him on his funeral pyre.

Towards the end of it all we get elderly widow and red-uniformed army veteran Colin Thackeray who sings beneath a montage of photographs of his late wife. “She was a good companion and a good wife,” he says, and I find myself suddenly supporting a no-deal Brexit and weeping. The only way to beat this act, really, would be if someone found a basket of harmonising rescue puppies or managed to reanimate Princess Di (and only then if she could juggle or something).

After all the acts have performed, the decision about who makes it to the final is outsourced to the viewers at home, once more making a mockery of representative democracy. It’s billed as an “advisory vote” but all failed candidates are taken out back by the beefeaters, then shot by Ant and Dec, who have a lot to answer for, in fairness.

Over on Channel 4, The Circle returns. To involve oneself with this show’s decisions means downloading an “app”, something I can’t get the operator to do on my rotary dial phone, so I watch most of the show in gentle, sedated bafflement. Emma Willis, dressed as a sports banana (a yellow suit with a speed stripe), is overseeing a wheeze wherein eight extroverts live in adjacent apartments interacting only via a social-media site called the Circle. They dictate their messages aloud (much like I do) and say things like, “I may look bougie but I swear I love banter”, which you’ll remember as a quote from the last Liberal Democrats manifesto.

Outside, Willis interviews last year’s winner about how best to deceive people online (seriously). It feels like we’re entering strange new territory and that it’s only a matter of time before she’s showing us how to buy crystal meth or build a dirty bomb.

This year, half of the players are actually lying to some degree or other. Eighteen-year-old Woody, for example, is trying to hide the fact he’s the offspring of two massive stars of the 1990s (Baby Spice and Mr Blobby, I believe). Another young man is pretending to be a single mother with a baby, basing his character on his own mother. Meanwhile, an actual middle-aged mother is pretending to be a twentysomething man, basing him on her own son. When this duo have a private chat, it feels like a very complex form of psychotherapy and also dangerously like reality is about to collapse on itself.

And then celebrity guest Richard Madeley (of Richard and Judy) enters the game to catfish the other residents. Catfishing with Richard Madeley once seemed like an unlikely television pitch, but the world has changed so much since I was 43 and full of hope. Now I’m 44 and paranoid that the rich widows I’m trying to grift online are Richard Madeley in disguise.

I suppose there are worse things. Sure, we’re all on reality television now.