The Aeronauts: A rare treat of old-fashioned adventure 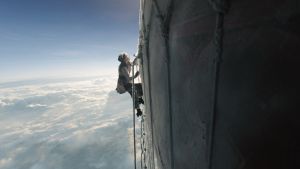 Felicity Jones in The Aeronauts.

The vintage ballooning community will, no doubt, be in a rage about the liberties taken in this enchanting tale of aerial exploration from the Victorian era.

James Glaisher (Eddie Redmayne) was the daring meteorologist who, in 1862, broke the world record for altitude when his balloon ascended to 35,000 feet. In old-fashioned, matinee style, Tom Harper’s film builds a grand romantic adventure around the story’s central spine. You can get the facts from Wikipedia. The Aeronauts devises irresistible new legends.

The film’s most conspicuous invention is the daring, borderline-irresponsible aeronaut Amelia Wren (Felicity Jones). She combines carnival flourishes – dropping a parachuting dog on fairground attendees – with a precise grasp of practical aerodynamics. Glaisher is all about the science. His colleagues sniff at the notion that his experiments might help predict weather, but he suspects the ascent will open up whole new vistas (both literally and figuratively). After various arguments with men in top hats, he takes to the sky with his more cavalier co-pilot.

At the risk of attracting groans, the science that really matters here is the chemistry – first sparked in The Theory of Everything – between Redmayne and Jones. They’re not the flashiest of actors, but they work in the same gentle, friendly colours. Glaisher is intense and workmanlike.

Though more instinctive and adventurous, there is no hint of the dread Manic Pixie about Jones’s Wren. She provides the mission with the juice it requires.

Working a chart of duration and altitude into the visuals, the picture treats the ascent in something like real time. The result is the sort of adventure that the movies rarely provide anymore. Best seen on the widest screen possible, George Steel’s cinematography reminds us how strange flight once seemed. So much of what they’re experiencing – butterflies at unlikely altitudes, the other side of clouds – is being met for the first time.

The picture reaches heights of tension when Amelia is required to climb the balloon itself and release an air valve.

In truth, the characterisation is almost as thin as the air. If it weren’t for the admirable efforts of Jonesmayne, our heroes would be little more than single-adjective ciphers.

But the Victoriana is so well assembled, the action so thrilling and the tone so good-natured that only boobs will bother to care. A treat.