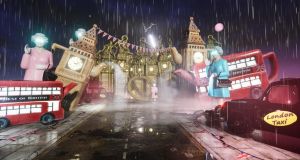 Rachel Maclean exhibited a virtual reality artwork in London. Visitors put on a chunky set of headwear and a handheld clicker to experience I’m Terribly Sorry (2018)

Could Brexit spark an English civil war? I ask this question as a pacifist who has spent years studying Northern Ireland, not to try and stoke tensions – but the very opposite.

The 2016 EU referendum brought into being a binary of identity, where none existed before: Leavers and Remainers. All conflict is built on the imaginative foundations of “us” versus ‘them’ – and when a messy and complex set of interconnections are framed as two options, all too often people respond by identifying “patriots” and “traitors” on both sides.

If another group starts to be read as a threat, attention can shift from co-existence to a desire that outsiders be “eliminated”. Differences are played up: each side of the binary is assumed to be the opposite of the other – obscuring similarities, overlaps and shared feelings.

These reactions are how militarism plays out on both the level of the psyche and society. In 2018, Scottish artist Rachel Maclean exhibited a virtual reality artwork in London. Visitors put on a chunky set of headwear and a handheld clicker to experience I’m Terribly Sorry (2018): once immersed, they found themselves on a fantasy London street – drenched with rain, surrounded by giant inflatable tourist souvenirs like Big Ben and the Queen.

Maclean’s artwork is terrifying and profoundly chilling – as much as its computer-simulated graphics are deliberately surreal, it holds on to the horror of the violence, rather than try to glamorise or romanticise it

Although the foreboding and dystopian landscape was make-believe, the neo-Gothic clocktower threw up associations with Westminster Bridge – the site of a terrorist attack a year before.

The audience experiencing the artwork could look around 360°, as well as above and below. In their hand they carried a simulated smartphone, which could take flash photos. The viewer is approached by a series of affluent British characters, whose heads are replaced with smartphones – their faces plastered grotesquely over the screen. They harangue the visitor for money, until someone behind you apologises for the disturbance. “Please don’t encourage the natives,” he says, before asking you to take a photo of him with the device in your hand.

You oblige, but without you realising it – the smartphone shoots him. He collapses on the street, and then the others begin to attack you. They multiply into vast swathes, and although you can shoot them – they keep coming, eventually pummelling you to death. Your vision fades to red, then cuts to black, and all you can hear is the sound of panting breath.

Maclean’s artwork is terrifying and profoundly chilling – as much as its computer-simulated graphics are deliberately surreal, it holds on to the horror of the violence, rather than try to glamorise or romanticise it. The VR experience is about Brexit: when I saw it, I took it as a metaphor about the divisions opening up in British society.

A year later, it feels more like a warning. The mood in England has plummeted. After the Supreme Court’s ruling that the UK government acted illegally by proroguing parliament, prime minister Boris Johnson dismissed MPs concerns about death threats as mere “humbug” – while using rhetoric of “surrender” and “humiliation” at the dispatch box. Three years ago, during the EU referendum campaign, Labour MP Jo Cox was murdered by a white supremacist – who would go on to give his name as “death to traitors, freedom for Britain” when he later appeared at Westminster Magistrates’ Court.

Civil war has been increasingly used as a metaphor over the last year, as the English public continued to polarise and bitter disillusionment at feelings of powerlessness became widespread

On the same day Johnson showed absolute contempt for Cox’s memory and serious fears of further violence, a soldier serving in the British Army publicly tweeted a message to Labour’s shadow education secretary Angela Rayner: “Ohh f*ck off you stupid bitch, c*nts like you will perish when civil war comes and it’s coming. 17.4 million people are gunning for blood if we don’t leave.” The army and police are investigating the incident – but it follows a leak in April of a video that showed serving members of the British army using a photo of Labour leader Jeremy Corbyn for target practice.

Two days after Johnson’s appearance in parliament, a journalist on the BBC’s Politics Live TV show claimed: “I am amazed that there hasn’t been riots yet … I think there should be”. That very morning a government minister had issued a warning to politicians: “deliver Brexit or face riots”. Earlier in September, far-right website Guido Fawkes had tweeted: “If we are going to have an early election please let it be on November Fifth… because it is going to see MPs massacred”. These comments have been criticised for inciting violence.

Civil war has been increasingly used as a metaphor over the last year, as the English public continued to polarise and bitter disillusionment at feelings of powerlessness became widespread. After Johnson prorogued parliament, he was compared to King Charles I – who was beheaded after the 1642-1651 English civil war, fought between royalist cavaliers and parliamentarian roundheads. Online blog The Conversation warned that “Johnson would prorogue parliament at his peril – just ask Charles I”. The Guardian joined in, running headlines that told of how “A civil war state of mind now threatens our democracy” and “comparisons between Boris Johnson and Charles I aren’t just lazy rhetoric”.

Whatever happens next, we have to start talking about ways in which we can co-exist – perhaps even stepping back from the way Remainer and Leaver have become all-encompassing identities

English author Michael Morpurgo told the same paper, “It’s almost civil war”. A sign at one anti-prorogation protest read, “CHARLES I IS BACK: WHERE IS OUR CROMWELL?” to the dismay of anyone with knowledge of Irish history. Using civil war as a metaphor might have started out as a joke – in August comedian Chris Addison tweeted, “I only just finished stockpiling for a No Deal Brexit. Now I have to do it again for a civil war?”. For others, like when anonymous account @FatPudding32 demanded “Civil war now!” – it is less clear.

The metaphor seems to have just seeped into everyday rhetoric: barrister Jessica Simor QC took to Twitter to condemn the government for “literally stoking civil war with their lies”. In a recent Guardian interview BBC TV host Fiona Bruce recounted how she would ask her studio audience “in advance to signal whether they were remainers or leavers, roundheads or cavaliers” – a slippage that is deeply revealing. The supreme court judgement that ultimately overturned prorogation, cited the “relationship between Stuart kings and parliament, which culminated in civil war”, as a justification for their decision.

I face a dilemma, in writing this article: the fear that even writing about such rhetoric could help exacerbate it. But I want to make a plea to the hard-line factions of Leave and Remain in the UK, to start contemplating how they are going to continue to live alongside each other. With the Conservative Party edging towards a no deal, and the Liberal Democrats adopting a revoke position, the two extremes promise their electorate they can deliver “resolution” or a “clean break” so the UK can “draw a line under Brexit”. But both these camps can only conceive of a future in which the other side simply ceases to exist.

Remainers are as likely to vanish or fall silent after a no deal as Leavers are if Brexit was ever outright cancelled. They will not simply disappear from either Westminster or the communities up and down the country that are becoming increasingly tense. Corbyn, who has made a life-long commitment to peace, understands this problem – and it seems Labour is the only party even talking about policies that try to accommodate (or frustrate) both Leavers and Remainers. I’m not saying such proposals are necessarily are the answer – I don’t see how another referendum wouldn’t further divisions.

My plea is this: all conflict is built on the conceptual foundations of us versus them. But such binaries can never contain all the complex ways people are interconnected and interdependent: you cannot harm another without harming yourself. Whatever happens next, we have to start talking about ways in which we can co-exist – perhaps even stepping back from the way Remainer and Leaver have become all-encompassing identities. For a referendum campaign based on the promise that leaving the EU would enable the UK to “take back control”, the aftermath has brought home a fundamental fact of our lives: no one can have absolute control, either over themselves or those they consider a threat. We have to be able to live with each other.
Dr Edwin Coomasaru is an associate lecturer at the Courtauld Institute of Art, researching the gender politics of Brexit’s visual culture