Dermot Bannon's vision for utopian Ireland, one kitchen extension at a time 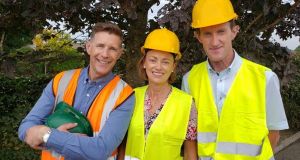 “Make America Great Again!” “Take Back Control!” “Let’s open up this space a little and maybe get a granite worktop and expose the wooden floor and get eggshell blue cupboards!”

The 21st century is filled with populist slogans like these. The last one isn’t quite like the others, but Ireland isn’t quite like other places. We don’t want to bring about heaven on earth through the ascension of the working man or by crushing the poor or by devising a life changing app. We just want a nice kitchen.

Of course it’s through our nice kitchens we will ultimately be saved, and hence Dermot Bannon brings about his own utopian vision one kitchen extension at a time. This week on Room to Improve (RTÉ One, Sunday) (aka Man’s Search for Meaning, aka HP Lovecraft’s Bungalow Bliss) Dermot appears in the lives of two soon-to-be-married sixtysomethings in Borrisoleigh, in Co Tipperary, who have reached the “building a big extension” phase in the human lifecycle.

Dermot Bannon's ultimate aim is to make everyone blind with sunlight. Newgrange, which only gets a single shaft of sunlight once a year, on the winter solstice, disgusts him

They are named, according to the restrictive naming protocols of pre-Celtic Tiger Ireland, “Joe” and “Mary”. (Before 1990 there were four acceptable names for men and two for women; nowadays you can take your pick from all sorts of nouns and adjectives for your doomed offspring: Arlo, Timstopher, Gucci. It’s anarchy!)

A condition of Mary moving into Joe’s self-built “bachelor pad” is that the house be restructured from top to bottom. “I wanted Mary more than I wanted the house,” says Joe, breaking our hearts a little. “I’ve no choice only wreck the place. But it’s going to be worth it.”

Joe consoles himself by managing to sell absolutely everything that’s pulled from the rubble over the course of the show. He spits on his hand before shaking on a deal, much like the Bull McCabe, Enda Kenny and Cheryl Cole do.

Poor Joe. To my eyes he has made the perfect home for himself. It looks like a child’s drawing of a house. It has three windows and a door at the front, which is the right number of windows and a door. His bedroom is a long rectangle in case he gets really tall and wants to lie down. His sitting room is never used because who wants to sit when there is so much standing to be done? He has four stately pillars at the front of the house holding up a Romanesque canopy, because if it’s good enough for the classical world it’s good enough for Borrisoleigh. And it all sits on a huge expanse of tarmac, because ever since ancient man first set foot on this island has he not dreamed of covering the place with tarmac? I know I have.

Then along comes Dermot Bannon, and he starts to be rude about Joe’s house, pointing out all the aforementioned as though they are bad things. “Shut your filthy poo mouth, Bannon!” I shout at the screen. “Leave Joe be!”

He really goes manically overboard in his dislike of the house. “This bloody pig sitting in the middle of a sty,” he says at one point.

Joe is a simple man. He sits down on his two-seater La-Z-Boy beside Dermot despite these insults. He originally bought the couch, he says, “just in case I met somebody”. Then he stares at Dermot Bannon in the way we all stare at Dermot Bannon when he’s in our house.

Dermot lays out his plans for the couple. His ultimate aim, as you know, is to make everyone blind with sunlight. Newgrange, for example, which only gets a single shaft of sunlight once a year, on the winter solstice, disgusts him. Dún Aengus, on Inis Mór, he likes, because there’s no roof and half of it has fallen into the sea.

Joe and Mary agree with his schemes and discuss a budget. I think I can speak for all of my compatriots when I say that this part is very arousing and we all have to pause the video many times when they talk about getting money back via an environmental grant.

Eventually the couple get more or less what they want: a well-lit, well-designed open-plan space in which no one can hide from themselves and their imperfections

This isn’t one of those episodes where Dermot has a serious run-in with anyone, but thankfully, like all mad kings, he has fallen into a parlous state of paranoia. “As usual everybody around me has been plotting,” he says, at one point, white-knuckling his steering wheel. I presume he’s explaining this for our benefit, but I also like to think he mutters away to himself when the camera’s not there.

Anyway, he’s right. Mary and Joe have been plotting. The infidels want to install an ersatz fire. Dermot hates ersatz fires, and this nearly sends him over the edge. He also has a bit of a fit over the colour of some mortar and almost collapses into existential despair when a garrulous local designer, Andy, wants to use a different wood panelling in the kitchen. Eventually Andy reluctantly accedes to Dermot’s demands, but this isn’t enough for Dermot. “Do you want me to get down and start kissing the page?” asks Andy.

Like all ideologues Dermot is fierce susceptible to what foreign-policy wonks call “mission creep”. Before long he’s out with Joe advising him on his wedding suit. “Ninety per cent of the time the customer is always right,” observes the tailor.

“In my business it’s the opposite,” says Dermot, bitterly, thinking of how beautiful his extensions would be if they were completely empty and didn’t have meddlesome people mucking them up.

Then Joe and Mary get married. Dermot Bannon gives a speech, as is tradition and as he did at my wedding and, presumably, yours. Eventually the couple get more or less what they want: a well-lit, well-designed open-plan space in which no one can hide from themselves and their imperfections. Mary admits to shedding a tear of happiness and Joe loves Mary, so he’s happy. Meanwhile Dermot pretends he’s not sick as a dog about the tiny compromises he has had to make.

I suspect he’d have happily left Joe and Mary’s sweet relationship a lifeless husk just to get the mortar colour changed. He stands in the darkness outside the home considering his experience, possibly for hours, before walking across to the fields to another house, maybe yours. If it is, be sure to let us know how you get on.