After the Wedding: clever gender-swapped remake of grand old melodrama 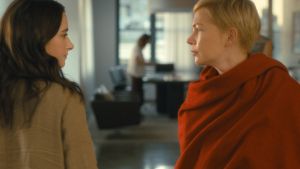 Film Title: After the Wedding

Writer-director Bart Freundlich’s remake of the 2006 Danish film of the same name by Susanne Bier is rather more interesting than the typical Euro-drama snapped up for a Hollywood remake. The Bier film, that tonally slotted neatly between the Danish director’s Brothers and Things We Lost in the Fire, was a grand old melodrama concerning a dying millionaire attempting to set his wife up with her ex-boyfriend. Freundlich’s clever gender-swapped remake changes everything.

Isabel (Michelle Williams) has dedicated her life to working with the children in an orphanage in Calcutta. Theresa (Julianne Moore) is the rich mogul head of a media company who lives a picture-perfect life with her handsome artist husband (Billy Crudup) and their two twin sons in New York. Isabel is put out when this potential benefactor insists that she come to New York for a meeting and even more put out when elaborate plans for a wedding for Theresa’s daughter Grace (Abby Quinn) get in the way. Then Isabel recognises Theresa’s husband and it becomes clear that there’s more to the arrangement than a charitable donation. Plot twists ensue.

There’s a great deal of white privilege and first-world problems underpinning Freundlich’s script; the debate between Grace and her ghastly new husband (Alex Esola) over honeymoon destinations (Costa Rica versus India) is grim.

Against all odds, and with the assistance of a stellar cast, After the Wedding generates nuanced, empathetic characters. Hey, they got Julianne Moore and Michelle Williams after all. Interestingly, and against type, this American remake tones down and finesses the heated melodrama of the original. Tech specs, especially Julio Macat’s handsome cinematography and Mychael Danna’s score, are impressive. But this does always feel like a lovely facsimile, albeit with some neat inversions.