TV guide: 15 of the best shows to watch this week

New Irish crime drama Darklands on Virgin, plus the return of Motherland on BBC2 and John Turturro in an Italian remake of Umberto Eco’s The Name of the Rose 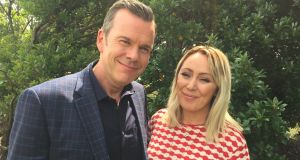 Dr Paul D’Alton with Rachael Keogh on Survivors, Tuesday on RTE One

Secrets of the Seduction Bootcamp – Panorama
Monday, BBC1, 8.30pm
Myles Bonnar investigates the growing multimillion-pound industry that sells men pick-up techniques to get women from the street and into bed as quickly as possible. The programme goes undercover at a so-called seduction “bootcamp”, where Bonnar finds that picking up women has been turned into a game where the lines of consent are blurred and only the men know the rules – the women don’t even know they’re taking part.

The comedy series cowritten by Graham Linehan and Sharon Horgan returns for a second series, bringing more trials and tribulations of motherhood for all gluttons for punishment. This is the side of motherhood that’s not usually seen on TV – don’t expect much in the way of tummy-tickling, snuggling or soft, fluffy sentiment. Instead brace yourself for more snarky, ruthless competition, as the middle-class mothers battle for dominance in this nappy-strewn battlefield. Anna Maxwell Martin heads the cast of desperate housemums in this second season, which sees the arrival of a new mum on the block who seems to have it all. This is of course like a red rag to a bull, and it’s not long before the other mums are working hard to cruelly crack her veneer of success.

This new six-part Irish crime drama was created by Mark O’Connor on the heels of his Cardboard Gangsters, one of the most successful Irish films of 2017. The series is set amid a gang war in a small town, where 16-year-old Damien (Dane Whyte O’Hara) dreams of becoming a professional MMA fighter. But Damien’s reckless older brother Wesley (Damian Gildea) has turned to crime to help provide for the family. When a major drug deal goes wrong and Wesley goes missing. Damien begins to feel the pressure to step up as a provider for his family. Gang leader Bobby Butler then approaches the teenager, promising to help him find his brother while attempting to lure him into the gang. Just to complicate matters, Damien’s girlfriend Nicola (Aisling Kearns) is from the family of a rival gang across town. Her brother is a vicious thug and all of them are sworn enemies of Butler and his crew.

Ian Hislop’s Fake News: A True Story
Monday, BBC4, 9pm
The Have I Got News for You team captain and Private Eye editor explores dishonest news reporting over the past 200 years. Hislop uncovers a story from 1835 in which strange creatures were supposedly sighted on the moon and investigates how the rivalry between press barons Joseph Pulitzer and William Randolph Hearst may have contributed to an actual war. He also looks at the influence of technology, from early trick photography to modern deepfakes, and profiles the owner of a Washington pizza parlour who has been on the receiving end of one of the modern world’s most infamous conspiracy theories.

Survivors
Tuesday, RTÉ One, 11.40pm
This episode focuses on one woman’s battle to beat drug addiction. Rachael Keogh was 26 when her mother “outed” her as an addict by releasing photos of her drug-ravaged arms in a desperate bid to get her daughter the medical help she needed. Keogh has now been clean for 13 years, has become a mother, built up a career as a writer, artist and musician and is also an activist. The programme ,run by clinical psychologist Paul D’Alton, looks at how she found the inner strength to fight her demons.

Zomboat? Couldn’t they have come up with a better title than that portmanteau of “zombie” and “boat”. This comedy series is set in Birmingham during a zombie apocalypse, and a boat does indeed figure – a barge, actually. As the walking dead take over Birmingham, sisters Kat and Jo take to the waters of the canal to escape their clutches. They’re joined by Sunny and Amar, and the four must get along as they putter along the canal to freedom. But though they may have escaped the zombies, they can’t escape from each other, and in the confined space of the barge, it’s not long before they’re at each other’s throats.

The Channel Tunnel – Life on the Inside
Wednesday/Thursday, BBC2, 7.30pm
In May the Channel Tunnel celebrated its 25th anniversary. Building it was a huge achievement (it’s the longest undersea tunnel in the world) but the hard work didn’t stop there. This new series meets the people who toil behind the scenes to keep the Chunnel on track as new challenges loom. The first episode asks how Brexit will affect this link between Britain and continental Europe and finds out how the staff are dealing with the potential problems that could arise.

Your Home Made Perfect
Wednesday, BBC2, 8pm
In most makeover shows, the people whose homes are being transformed must put their faith in the designers and trust that they’ll like the finished rooms. But if you’ve seen this series before, you’ll know they already have a pretty good idea what they are going to end up with. Presenter Angela Scanlon uses cutting-edge virtual reality and visual effects to show homeowners two radically different plans for their properties. They theny decide which one they want to construct for real. In this edition, we meet Helen and Rob, who have already transformed the front room and entrance of their Victorian terraced house in St Albans. Now, they want to tackle the back of the house.

63 Up
Wednesday, Virgin Two, 9pm
A welcome repeat of the latest installment in director Michael Apted’s every-seven-year series, back to catch up with people we first met 55 years ago. We’ve watched them grow up every seven years as they completed school, got jobs, married and had children. Now they’re reaching retirement age. Among those featured in 63 Up is Tony, who gave up a career as a jockey and became a cabbie; and Sue, who was first on the show with her friends Jackie and Lynn, and has since shared her experiences of being a single mum.

The matchmaking series ends with a celebrity special. Among the other stars looking for love is Ulrika Jonsson, who is hoping to have some fun following the breakdown of her third marriage. Ideally, Jonsson wants to have a laugh — she claims no man has cracked her up since 2005 – but can Bristol businessman Paul put the smile back on her face? Meanwhile, Pete Wicks from The Only Way Is Essex fears that his bad-boy reputation is putting off prospective partners, while TV presenter AJ Odudu admits she usually puts her work before her love life and has a habit of “friend-zoning” men who get too close.

Inside Prison: Britain Behind Bars
Thursday, UTV, 9pm
The documentary lifting the lid on life behind bars focuses on HMP Isle of Wight, a specialist prison housing many sex offenders and paedophiles. Intelligence has been gathered that a USB stick containing child pornography is doing the rounds, so the officers launch a search. But finding such a small item in a vast prison is no easy task. The staff also face a constant battle against drugs, as the inmates find sophisticated and creative ways to smuggle them in, from letters sprayed with a spice solution to hollowed-out chess pieces.

One-off show in which people from opposite ends of Britain’s class system go on a series of dates to find out if love can bridge the divide. First up are gas fitter Jack and trainee barrister Holly. She introduces him to her favourite pastime, horse riding, while he introduces her to his mum, who worries about her son going out with a posh girl. Meanwhile, prosperous Sam takes teacher Amy on a picnic and punting extravaganza – but will her passion for kebabs prove too much for her privileged would-be partner?

The Name of the Rose
Friday, BBC2, 9pm

In 1980, Italian writer Umberto Eco published his first novel, which went on to become a bestseller across the globe. Six years later it was made into a big-buget movie, with Sean Connery and Christian Slater in the leads. Now it’s been turned into an eight-part TV series, an Italian/German coproduction starring John Turturro and newcomer Damian Hardung as 14th century Franciscan friar William of Baskerville and novice Adso of Melk. They arrive at a remote Benedictine abbey, supposedly to help resolve a dispute over poverty, but become embroiled in a chain of mysterious deaths, possibly involving a sinister representative from the Inquisition (Rupert Everett).

Have I Got News for You
Friday, BBC1, 9pm
Those taking part in the first of a new run (the 58th!) of the satirical quiz have plenty of material at their disposal. It’s been an extraordinary period in political history – and that’s without even mentioning Brexit or Trump. Guest host Martin Clunes will try to keep order this week as team captains Ian Hislop and Paul Merton go head-to-head once again.

Pompeii: The Bodies in the Basement
Friday, Channel 5, 9pm
A new investigation into one of the most harrowing gravesites of the AD 79 eruption, where more than 55 bodies were found cowering at a site that has long baffled archaeologists. While the skeletons at the back of the room have no possessions, those crowded at the front are laden with jewellery and gold. But why, in the chaos of their dying moments, were the bodies so starkly divided by wealth? This documentary examines the theory that the bodies apparently hoarding wealth were actually looters, and asks what that tells us about crime in Pompeii.