Emmys 2019: Night of triumph for Fleabag and Game of Thrones 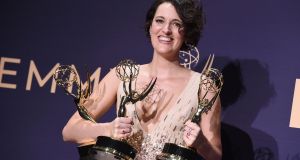 Phoebe Waller-Bridge with the three Emmys she won for her series Fleabag. Photograph: Jordan Strauss/Invision/AP

The dragon did it one last time. HBO’s Game of Throne made television history at the 71st Primetime Emmy Awards on Sunday, winning for best drama series and tying the record for the most wins in that prestigious category with series like The West Wing, L.A. Law, Mad Men and Hill Street Blues. The sprawling fantasy series, which had its finale in May after eight seasons of blood and intrigue, won 12 Emmys, adding to its record total for the most wins of any television drama ever.

The night was also huge for Fleabag, a series that grew out of a 2014 one-woman show by Phoebe Waller-Bridge. Waller-Bridge won three Emmys on the night, including for best actress in a comedy, a win that came as an upset. The much-decorated Julia Louis-Dreyfus, the star of Veep, failed to win the best actress award for the first time in the show’s seven seasons. Waller-Bridge also won in the category of best writing for a comedy series.

“Well, this is just getting ridiculous,” Waller-Bridge said, laughing, after taking centre stage to accept the award for best comedy series. She has said that the show’s second season was its last. “To be honest, this feels like the most beautiful way to say goodbye,” she said after the ceremony when asked if her Emmy success would make her reconsider her decision to end the series.

Chris O’Dowd was nominated for in the Actor in a Short Form Comedy or Drama Series category, for his role in the US series State of the Union, which follows a couple in marriage counselling.

In keeping with Emmy tradition, HBO had a strong night overall, taking three of the top series awards, including a victory for a frequent winner, Last Week Tonight With John Oliver, as the year’s best talk show. The network also won in the category of best limited series for Chernobyl, which won 10 awards altogether.

For his work on Game of Thrones, Peter Dinklage won – for the fourth time – the award for best supporting actor in a drama. In his acceptance speech, he paid tribute to the show’s top producers, David Benioff and Dan Weiss. “Dave and Dan, we literally walked through fire and ice for you,” Dinklage said. “And I would do it again in a heartbeat.” HBO has undergone executive-suite changes since last year’s Emmys: Richard Plepler, the network’s former chief executive, stepped down in February. He was thanked by Weiss and Benioff, as well as by Oliver and Jesse Armstrong, the creator of the corporate drama Succession, who won in a writing category.

The night also represented something of a defeat for Netflix, which went away empty-handed in the biggest categories. It was the seventh consecutive year that Netflix was nominated for best drama – this time for Bodyguard and Ozark – and failed to win. Likewise, Netflix has never won in the best comedy category, in six tries. Another streaming platform, Hulu, won for best drama in 2017 for The Handmaid’s Tale.

Billy Porter wins for his work on Pose

Billy Porter was the breakout actor of the night. Porter, one of the stars of FX’s New York City 1980s ballroom-scene drama, Pose, won best actor in a drama. It was the first time an openly gay black actor had won in the category. “The category is love, y’all. Love!” Porter said, using his character’s signature catchphrase. One of the nominees he beat out was Jason Bateman, who did not have to wait for long before taking the stage. Bateman’s Emmy came in the drama directing category, for the Netflix show Ozark. Jodie Comer, a star of BBC America’s Killing Eve, won for best actress in a drama. In doing so, she beat her castmate Sandra Oh. Oh has been nominated for 10 Emmys, eight of them for acting, and has yet to win.

In the limited series category, HBO’s Chernobyl, about the 1986 nuclear reactor disaster in the Soviet Union, edged Netflix’s When They See Us, a series from filmmaker Ana DuVernay about the Central Park Five, who were wrongfully convicted and sent to prison as teenagers for the 1989 rape and assault of a jogger in New York City.

Chernobyl, which appeared on HBO last spring without much fanfare, became an unlikely critical darling. It won three Emmys on Sunday: Craig Mazin, the show’s creator, took the award for best writing, and it was honoured for directing as well.

With the Emmys’ habit of rewarding the same shows in drama, variety and comedy year after year, the limited series category has become the ceremony’s most intriguing. And with little chance of winning in other major series categories, Netflix was holding out hope that it would prevail with DuVernay’s show.

While it did not take the best limited series award, DuVernay’s When They See Us still made an impression on Emmy voters. Jharrel Jerome won for best actor in a limited series for his role as Korey Wise, the eldest of the five. The actual Central Park Five were in attendance at the Microsoft Theatre, and they leapt up from their seats when Jerome got the win.

The actor thanked his mother and DuVernay, adding: “But most importantly, this is for the men we know as the Exonerated Five.” Beneath the competition between When They See Us and Chernobyl in the limited series category was the heated Emmys rivalry between HBO and Netflix. HBO took the crown this year, earning 34 Emmy wins compared to Netflix’s 27. – New York Times