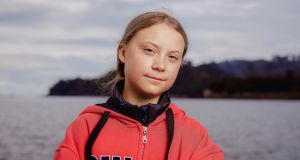 Greta Thunberg: Ryan Tubridy has been criticised for his on-air remarks about the activist. Photograph: Tom Jamieson/New York Times

Ryan Tubridy is often slagged off for being bland, but this seems unfair. After all, anyone who can trigger the level of offence that Tubridy does with his on-air remarks about teenage climate activist Greta Thunberg doesn’t deserve to be branded insipid, whatever else he may be called. Checking which way the wind is blowing then setting one’s face firmly in the opposite direction are not the actions of someone seeking easy popularity.

Yet the presenter does just this on Tuesday (The Ryan Tubridy Show, RTÉ Radio 1, weekdays), when he talks about Thunberg’s dramatic speech to the UN. He says he “felt a little uncomfortable” at the sight of a teenage girl addressing a global audience with “her face contorted in pain, agony and anxiety”, and wonders how he’d feel if it was his own daughter. Noting that Thunberg has Asperger syndrome, he adds, “I don’t think she should be put on that stage, it’s not good for her mental health or well-being.”

In fairness, Tubridy sounds concerned rather than dismissive, worrying that someone Thunberg’s age is “up for grabs”. He also agrees on the necessity of climate action, praising the “chutzpah and spirit” of young people recently marching on the issue. He’s being a good guy, Tubs assures us: “It’s not to knock her and it’s not to mock her.” So why do his comments cause him to be “shredded online”, as he puts it the following day?

Tubridy's wounded tone is understandable: it’s hard to imagine a swaggering contrarian such as Newstalk’s Ivan Yates catching as much flak

His clunky language is one problem. He talks about Thunberg being in “a mental illness situation that we need to be aware of”. Tubridy later tries to firewall himself by talking to Denise, whose nine-year-old son also has Asperger’s. Denise shares some of the host’s unease, but also recognises some of her son’s passion and focus in Thunberg.

A bigger issue, arguably, is the host’s fretful pondering whether Thunberg is being looked after properly. “She needs to be brought home and watch a movie,” he says of the 16-year-old, just a tad patronisingly. Moreover, suggestions that Thunberg is being used by others is the standard line of attack used by her opponents. Tubridy perpetuates this trope by wondering if she wrote her speech. “It didn’t feel that it could have come from her own pen,” he says, only to revise his opinion when Denise says she believes Thunberg did write it.

On Wednesday, Tubridy addresses the adverse social media reaction to his riff in uncharacteristically defensive fashion. His remarks were from the heart, he says, showing “genuine concern for a young person on an amplified stage”. He also reiterates his support for the climate marches. His wounded tone is perhaps understandable: it’s hard to imagine a swaggering contrarian such as Newstalk’s Ivan Yates catching as much flak for such sentiments.

But it also misses the point. Tubridy, with his sincere belief in old-fashioned values like decency and civic duty, is on thin ice when he makes Thunberg the focus of his opinions, rather than her pressing message of climate catastrophe, dovetailing as this does with the less generous impulses of others. Either way, he makes heavy weather of the matter.

It’s notable that Ciara Kelly doesn’t land in hot water when she expresses her own fears for Thunberg on Lunchtime Live (Newstalk, weekdays). This is possibly because Kelly is unabashed in her admiration for the “incredible” Swedish teenager, describing her as a talismanic leader who has ignited a movement among the young. Kelly even gets into the dissenting swing of things by decrying “wealthy capitalists” as an obstacle to climate action.

Only then does she gently worry that the burden on Thunberg’s “extremely young shoulders” will transform her into a Joan of Arc figure: “I don’t want to see her consumed.” Crucially, Kelly shifts the focus of the debate, asking why so many people are hostile to Thunberg in the first place.

Inviting listeners to share their opinions on contentious issues can be a recipe for confusion, but here it actually clarifies matters. One caller, Harriet, talks about Thunberg’s influence on her own environmentally aware daughter, though she is apprehensive about her being thrust into such a high-profile position. Even so, both Harriet and her host recognise why this has happened: “Unfortunately, she has this air of brilliance.”

Duffy is determined to wring something from the item, even if it’s some crass national stereotyping

Another caller, John, finds it “upsetting” that someone as young as Thunberg is so exposed on the world stage. As the conversation progresses, however, John also suggests many striking pupils only attended climate marches “for the craic”, doubting if they’d give up their phones for the cause. By the end he talks about “lefties” who would “leave the energy in the ground” and have people using candles instead. His is a reasoned voice, however, compared to texters who think Thunberg “brainwashed by tree-hugging parents”. If nothing else, such calls lay bare the faultlines that make Thunberg so electrifying for her supporters, but so polarising for others. For that, Kelly deserves credit. Tubridy may wish he had taken a similar approach.

Amidst such heightened emotions, Liveline (RTÉ Radio 1, weekdays) is unusually free from ideological sturm und drang, sounding more like Antiques Roadshow. But Joe Duffy still manages to cause a stir of his own.

Duffy hears from Neil, a Scotsman who owns a tricolour that he thinks was flown during the Easter Rising – his great-grandmother worked in the GPO in 1916 . As experts casts doubt on the flag’s provenance, however, its value diminishes. Even so, Duffy is determined to wring something from the item, even if it’s some crass national stereotyping.

“Would you give to the [National] Museum?” he asks. “I’d sell it to the museum,” his guest replies. “What country are you from again, Neil?” Duffy responds, hooting at his own wit. “You’re a great Glaswegian.” Neil lets it go, but he’d be entitled to take offence.

War in the Age of Trump: Four years of fighting in Iraq and Syria
10

What of survivors deemed ‘too young’ to remember the Holocaust?
Real news has value SUBSCRIBE