Netflix: The 10 best new shows and films to watch in October

El Camino: A Breaking Bad Movie, Living With Yourself, The Laundromat and Big Mouth season 3 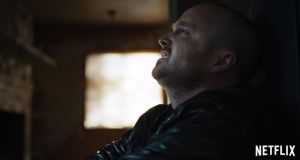 This timely documentary explores the struggles and fears of individuals caught in the US immigration system. Following eight different families, it examines the hardships they endure in their attempts to stay in America living and working as undocumented immigrants. Produced by singer Selena Gomez, it’s a unique and powerful glimpse into these peoples’ lives as they face the threat of deportation. Illuminating as it is devastating, Living Undocumented is the raw, unvarnished truth straight from those who are trying to survive within this complex structure as the Trump administration pushes for more restrictions.

The third season of this surreal animated show that explores sexuality and the horror show of hormones that is puberty, continues with this series focussing on ideas of consent, female rage and gender identity with the introduction of Ali Wong’s pansexual character. As Jessi (Jessi Klein) is getting in touch with her body and Missy (Jenny Slate) is finally visited by her puberty monster ( voiced by Thandie Newton) the boys are dealing with their own troubling feelings around confusing crushes, peer pressure and toxic masculinity with the show even featuring an appearance from Queer Eye’s Fab Five who attempt to give Nick Kroll’s Coach Steve a makeover. A cheeky look at the mindfield of human sexuality but for all it’s bawdiness, Big Mouth is as affectionate as it is anarchic.

The docu-series that examines corruption within the food industry returns, this time focusing its attention on subjects such as the real cost of avocados, expensive wine scams,the bottled water business and the brave new world of marijuana edibles.

Rhythm + Flow is a talent show searching for hip-hop’s next big thing. It’s an infinitely more cool, rap-focused X Factor - minus the terrifying spectre of Simon Cowell’s new Shar-Pei dog face. Featuring a judging panel made up of TI and Chance the Rapper and with the inimitable tour-de-force that is Cardi B rounding out the lineup, it ensures there will be no shortage of quotable lines and gif-able reactions ready-made for social media immortality.

The highly anticipated film follow-up to Breaking Bad sees Aaron Paul returning as beloved character Jesse Pinkman who is now on the run from the police after managing to escape Jack and his gang. Set immediately after the show’s finale the film will see Jesse trying to avoid the manhunt trailing him after the massacre that killed off nine victims (including the morally suspect Walter White) As he hides out in the shadows, he can’t stay lost forever with familiar faces haunting him on his journey to some kind of freedom.

Starring Paul Rudd and Aisling Bea, Living With Yourself is a clever, existential comedy that asks can we ever be truly happy with ourselves? Rudd plays Miles, a downtrodden office-drone struggling with his day to day existence. After visiting a mysterious spa he undergoes a treatment that promises to transform him into his “best” self, arriving home to his oblivious wife Kate (Aisling Bea) as a new man. Unfortunately, things do not go as planned as the old Miles he tried to shrug off is still there, in human form. It’s a high-concept comedy about confronting the less presentable sides of the self and how what we portray on the outside may not ultimately give us the acceptance and happiness we crave.

Steven Soderbergh’s latest Netflix production, which is loosely based on the uncovering of the Panama Papers, sees ordinary housewife Ellen Martin (Meryl Streep) becoming unwittingly embroiled in exposing a money laundering scam after investigating a fake insurance policy related to her late husband. This leads her into the world of the “secret life of money” where fortunes are amassed and shell companies are used to hide enormous wealth.

With the shifty, outrageous lawyers Jurgen Mossack (Gary Oldman) and Ramon Fonseca (Antonio Banderas) as the audience guides, they lead us down a rabbit hole of corruption, greed, bribery and how these shadowy financial dealings filter down to affect the lives of normal people. With its colourful, chaotic presentation and fast-paced plotting, it’s another Soderbergh heist movie, but this time the consequences have global repercussions.

Stage Fright is actor and comedian Jenny Slate’s first comedy special having previously avoided being filmed due to her desire to keep her stand-up as immediate and spontaneous as possible. The fear of dissecting her work feeds into the special, which is part documentary and part stand-up routine, interspersed with childhood video clips and interviews featuring her family and friends as she examines her stage fright and how she managed to overcome it.

It Takes A Lunatic

An inspiring documentary about the unsung hero of the American stage, Wynn Handman, It Takes A Lunatic follows his career as an acting teacher and founder of the American Place Theatre. From championing unknowns to acting as a guide and mentor to some of the biggest names in stage and screen, Handman left an indelible mark on Broadway and Hollywood as we know it. Featuring interviews from former students such as Richard Gere, James Caan and Michael Douglas, it’s a celebration of a no-nonsense tutor who at 96 is still as influential as ever.

Dolemite Is My Name

A surprise hit at this year’s Toronto Film Festival, this explosive Eddie Murphy vehicle sees a triumphant return to the wise-cracking comedy he is most loved for. A biopic of sorts, Murphy plays Rudy Ray Moore, a hard-living hustler who’s stand-up comedy act as the outrageous character Dolemite, turns him into a star. With the success of his alter-ego, Moore tries to move from comedy records into a kung-fu kicking cinema presence with the help of his friends. With an ensemble cast that includes Wesley Snipes, Tituss Burgess, and Brooklyn 99’s Craig Phillip Robinson, as well as cameos from Chris Rock and Snoop Dogg, Dolemite Is My Name is stacked with comedic talent. A brash, affectionate look behind the creation of the Blaxploitation cult favourite, it’s a fun and spirited ode to DIY film culture and the industrious pioneers who muscled their way into the industry.