Disney+ tempts back fans with precision-tooled chuckles. Could this be a New Hope? 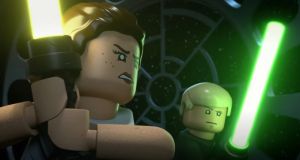 It’s slight, silly and, as an early Christmas treat, goes down smoothly

The original 1978 Star Wars Holiday Special was the dirty little secret tucked away at the back of the franchise’s underwear drawer. It has never been officially re-released following its initial broadcast: for decades everyone involved in George Lucas’s Jedi jamboree more or less denied its existence. I saw it on RTÉ as a child and for years wondered if I’d dreamt it.

But that was Old Star Wars. The Star Wars that took everything seriously. New Star Wars is, by contrast, learning to laugh at itself. Which explains the release on the Disney + streaming platform of an official Lego-themed sequel to the Holiday Special (Tuesday).

It’s new product for Disney+, which desperately requires fresh content. It is also an opportunity for Star Wars’ custodians at the Magic Kingdom to poke fun at some of the saga’s most recognisable moments. And, just as importantly, at a few of their own recent mishaps as guardians of the galaxy far, far away.

It’s slight, silly and, as an early Christmas treat, goes down smoothly.

Holiday Special 2.0 can also be seen as part of a campaign by the Mouse House to win back Star Wars fans scared off by the terrible “Disney Trilogy”. That sorry series came to a crashing end with last Christmas’ catastrophic Rise of Skywalker.

If you know anything about Star Wars you’ll be aware of how dreadful Rise of Skywalker was. But just to recap: it pulled from a hat a resurrected Emperor Palpatine (killed off seemingly for good in Return of the Jedi) and generally worked hard at ruining several generations’s precious memories of the old films.

Now comes a new strategy: to tempt back the fanbase with precision-tooled chuckles. The recently returned The Mandalorian has leaned into its dark humour (perhaps too dark in the case of the Child, aka Baby Yoda, snaffling all those eggs belonging to the talking Lady Frog). And the Lego Holiday Special is a hoot – for kids yes, but potentially even more so for parents. Or at least parents who once upon a time dreamed of being one tenth as cool as Han Solo in his Cloud City jacket.

The storyline is, as you would expect, perfunctory. There is a wink back to the 1978 Holiday Special in which Chewbacca and Han Solo visited Chewie’s home planet to celebrate “Life Day”. There they met Chewbacca’s dad Itchy, our hero’s wife Malla and son Lumpy. Even in the era of peak Bee Gees and bellbottoms, it was out there.

This time it’s the Wookies – not “Wokies”, that would be a very different cartoon – who are paying the visit. They’re calling on Disney Trilogy regulars Finn, Rey and Poe Whogivesadamn, as Disney seemed to have unofficially titled the neglected Oscar Isaac character.

Also present is Rose – voiced by Kelly Marie Tran. She’s one of the few big-screen cast members to feature (the majority are replaced by voiceover actors). And it is heartening to see, or at least hear, from her. Tran, lest we forget, endured horrendous bullying amid the backlash to the second Disney Trilogy picture, The Last Jedi. To be clear The Last Jedi was atrocious. But that had nothing at all to do with Tran’s performance.

The laughs arrive as Rey sets off for a secret Jedi temple in search of enlightenment. She has soon fallen through a portal and gatecrashes scenes from beloved – and less beloved – Star Wars movies.

This is quite funny. Emperor Palpatine poo poos the idea of calling his revamped Death Star “Starkiller Base” (as JJ Abrams named his in The Force Awakens). Kylo Ren’s adolescent petulance is milked for all it is worth. And there is a reverential and rather moving recreation of the “Use the Force, Luke” Death Star run from the 1977 Star Wars.

This latest Lego-fied Star Wars Special won’t obliterate memories of the Disney Trilogy. Nor will it become a subject of dark obsession like the original 1970s special. And it certainly isn’t as good as The Mandalorian (killer Baby Yoda notwithstanding).

But it’s witty, breezy and in on the joke. Could this be the first spark of a New Hope for Disney Star Wars?