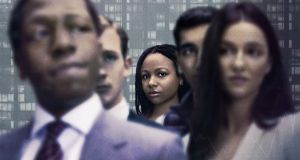 High finance, class-strife, drug-fuelled escapades – there’s so much going on in Industry

High finance, class-strife, drug-fuelled escapades – there’s so much going on in Industry (BBC Two, 9.15pm) you may initially find yourself struggling to keep up. Written by a pair of former City of London bankers, it is essentially a Gen Z reboot of 1990s young people melodrama This Life but set in Alan Sugar Apprentice’s boardroom.

That sounds like rather a muddle. Especially factoring into the equation Girls creator Lena Dunham, who directs the first episode as a tribute to Martin Scorsese’s Wolf of Wall Street.

It’s messy, sometimes spectacularly so. There are too many characters, a number of whom dress and speak identically. And the series seems generally unsure what points it wants to make about its investment bank setting or its cast of young people. Other than stating that the former is obviously corrupting and brutal and that the latter stay out all night hoovering up chemicals.

But Industry is also completely gripping. It portrays a world of utter immorality where new recruits crawl all over one another in search of that rare permanent gig. Think Hunger Games only with lanyards and coffee runs.

The story is told largely from the perspective of Harper (Myha’la Herrold), an American with a murky past (and dubious academic qualifications) who has come to London to make her fortune. As we begin, she has wangled her way into a job at fictional Canary Wharf investment bank Pierpoint & Co.

What do investment bankers do? Judging by Industry, they slump in wheelie chairs, shout down the phone and conspire against one another in the loo. It’s hell, only with industrial carpeting and fewer lunch breaks.

Harper is soon rubbing business-casual shoulders with workaholic Hari (Nabhaan Rizwan). He went to a public school and so feels he has something to prove to his privately-educated peers. And there is Robert (Harry Lawtey), the one who stays out late snorting substances. Plus she has a sort of mentor in Eric (Ken Leung), though it’s clear his support is transactional. Fail to deliver and she’s out the door.

There is a very specific enjoyment to be had watching unpleasant people behaving unpleasantly. Particularly when it is hinted that they may be for the high jump. That was the secret sauce that sustained Mad Men and it pulsates, too, through the veins of the far more ludicrous Billions. Industry is what happens when that formula is mixed with coming-of-age angst and the ever-present possibility of the action cutting to someone off their face in a club. It is frantic, cruel and addictive.