The return Zig and Zag on The Den: ‘People need a bit of mayhem, madness and boldness’ 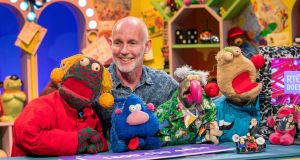 The waters were already tested last June when D’Arcy’s reunited with Zig and Zag and Dustin for Comic Relief.

You could cut the tension with a Zogabong. “You’ve never experienced anything like this before. It’s not like Today Tonight or Live at Three,” said the host, a young man with wavy dark hair and a fashion-forward multicoloured shirt. His guest nodded stiffly.

“We have only one camera,” the young man continued. “We have no cameraman. And no floor manager. And everything is very relaxed.” Everything was not very relaxed.

Now, ahead of her inauguration, came one of her sternest challenges yet. For the next 8½ minutes Robinson would require all her reserves of dignity as she traded witticisms with two manic puppets, with their wavy zogabong antennae, and a latex bird.

“How come you’re president?...There’s only ever been men presidents before,” wondered Dustin the Turkey. “They thought a woman couldn’t stand for president, but we put that right,” replied Robinson. In 1990s Ireland this is what television history looked like.

Thirty years later, RTÉ hopes to conjure anew the magic of The Den which ran in various guises from 1986 to 2010 (by which time D’Arcy and Zig and Zag had long since departed). A rebooted Den will this month welcome back D’Arcy plus Zig and Zag puppeteers Ciarán Morrison and Mick O’Hara along with Morrison’s younger brother John as Dustin.

“We’re there for the boys and girls and parents and inviting them to do all the things they used to, and more,” said D’Arcy, announcing The Den’s return to RTÉ One on Sunday, November 8th.

“It’s all very exciting and I can’t wait to be on telly with the boys again. People out there need a bit of mayhem, madness and boldness and that’s what we hope to deliver.”

Television revivals seldom go as planned. Often, the comeback is a pallid imitation of the original. Yet RTÉ isn’t taking a complete shot in the dark in bringing back the series.The waters were already tested last June when D’Arcy’s reunited with Zig and Zag and Dustin for Comic Relief.

This was a huge hit with viewers and a highlight of the telethon. Niall Horan was hilariously cut off mid-interview – to the fury of Twitter – trading jibes with Dustin and Bob Geldof didn’t know whether to laugh, cry or swear. The overall effect was chaotic, freewheeling and funny. Such was its impact, it thoroughly overshadowed a hyped Normal People “sequel” directed by Lenny Abrahamson.

But at whom is the rebooted Den aimed? Children were unlikely to have tuned in to Comic Relief at 10pm. A weekend evening-time slot suggests the new series is pitched at both kids and their Gen X parents, for whom the Den represents a beloved childhood memory.

Might that be a juggling act too far though? Is there a danger that, in trying to appeal to both, The Den ends up satisfying neither?

“It’s going to be hugely difficult,” says Dr Finola Doyle O’Neill, a broadcast historian at University College Cork. “Young people do not engage with RTÉ. They do not engage with the type of programming that is being offered. I wish it all the best but I wonder how feasible it will be. It’s going to be really hard to woo a cohort of young people.”

Should the new Den flop it would be an unfortunate stain on the legacy of one of RTÉ’s most loved children’s franchises. Decades on, it’s hard to convey just how big a splash Zig and Zag created first time around. They had initially crash-landed as sidekicks to Ian Dempsey in 1987, before Ray D’Arcy, a psychology graduate and former Jo Maxi presenter from Kildare town, took over the slot from 1990 to 1998.

The Den was inspired by the success in the UK of a stand-alone Children’s BBC segment in the afternoons. RTÉ’s answer was Dempsey’s Den – which initially ran for two hours on RTÉ One and featured Dempsey flying solo.

It felt like a staid rip-off. Everything changed with a move to RTÉ 2 and the arrival of Zig and Zag on September 22nd, 1987. The puppets quickly gained a cult following. One popular theory at the time was that a huge chunk of their audience was accounted for by hungover third-level students. Whoever was watching, by 1988 they had won a Jacob’s Award for TV Personalities of the Year.

With this injection of felt- and zogabong-fuelled anarchy, The Den quickly became more interesting than the cartoons Dempsey and his sidekicks were supposedly on hand to introduce.

There was the riotous Zig and Zag Story Time; the two would also take on alter-egos such as Captain Joke, Captain Pillowcase, Cousin Nigel from Birmingham and Captain Shamrock (a vicious skewering of misty-eyed Irish American). Dustin arrived in late 1989 and was initially supposed to be Zag’s Christmas dinner (he claimed he was actually a vulture).

“Through the Eighties we had a diet of Dallas and Dynasty and all of that. But as we slowly moved through the 1980s and into the 1990s, TV began to straddle modernity. Fair City had begun,” says Doyle O’Neill. “The key years with The Den were with Ray D’Arcy. He was very affable and accessible to young people.”

Ireland in 1986 was drab, poor and mired in fatalism. Swathes of the country felt frozen somewhere between 1950 and 1970. Dublin, Cork and Limerick were crumbling and grim. You could almost feel the deprivation, pricking your skin.

The 1990s were, by contrast, a decade of enormous cultural upheaval. Zig and Zag were perceived by some as symbolising that change. They certainly didn’t bow and scrape to the RTÉ hierarchy and seemed to delight in poking fun at hallowed figures such as Gay Byrne and Pat Kenny. Their reputation preceded them too. When Mary Robinson went on, it was she rather than Zig and Zag who was a bundle of nerves.

“The Den had their own producers, their own scriptwriters,” says Doyle O’Neill. “[RTÉ] possibly didn’t know what was going to be coming out of this little studio a lot of the time. It really was quite adult humour. There was a lot of irreverence. A lot of it was lost on the kids. But they loved the permission to be a little bold and outrageous: to say words such as ‘smelly’.”

That said, not everyone feels that Zig and Zag represented a moment of generational catharsis for Irish television. “People tend to overlook international influence and competition,” argues Edward Brennan of the School of Media at Technological University Dublin.

“The Den might have broken new ground for RTÉ but it wasn’t anything that Children’s BBC hadn’t already done. Look at Roland Rat, for example. Most Irish kids in the 1990s had access to BBC, ITV and Channel 4 via aerial or cable.”

One of those tuning in, potentially saying “smelly”, was Bob Geldof. The former Boomtown Rats singer and originator of Live Aid had lived in the UK since the 1970s. But he was often back to Ireland and couldn’t get enough of Zig and Zag.

“I heard them. . . driving in the car in Dublin, on the radio. Now it’s probably only in Ireland that you will get puppets on the radio, because it could be anything,” Geldof told Metro newspaper years later.

He suspected their anarchic humour would travel. Which is how, in 1992, Zig and Zag ended up on possibly the most 1990s television show of all time, Channel 4’s Big Breakfast –produced by Geldof via his Planet 24 company. They were an immediate hit. Which is how they famously came to interview Donald Trump in 1998 at the opening of the Royal Towers hotel in the Bahamas. He insisted on a 20 per cent cut of the business proposal they were pitching, he said he “wasn’t a nice guy”.

British Zig and Zag quickly proved to be a pale imitation of The Den. They had a shtick now and it was hugely dumbed down. Zag was depicted as more worldly, almost creepy. Zig was his feather-brained younger brother. And they suffered from the absence of Ray D’Arcy as straight man.

It is possible that Morrison and O’Hara weren’t overly troubled. Their Double Z Enterprises production company was raking in millions through merchandising and novelty record sales, plus a lucrative advertising contract with Yoplait.

“The potential merchandising opportunity in the British market is ‘huge’, according to informed sources, and has already made a millionaire out of the man who merchandised Roland Rat,” The Irish Times reported. “In Ireland, Zig and Zag merchandising, of which a percentage goes to RTÉ, has reached saturation point.”

The Britpop bubble eventually burst – as did Zig and Zag’s tenure on the Big Breakfast. So it was back to Ireland, where they have surfaced every now and again, not always to impressive results (a Zig and Zag cartoon, produced by CBBC, came and went unnoticed in 2016). Meanwhile, Morrison and O’Hara forged a parallel career with Zig and Zag’s depraved alter-egos Podge and Rodge.

But perhaps this time will be different and Zig and Zag will, in the Alan Partridge sense, bounce back with style. Lockdown has starved us of fun. In a manic confusing world perhaps Zig and Zag’s surrealistic anarchy will strike the right note. They and D’Arcy were hilarious on Comic Relief. Recapture some of that magic and a rejuvenated Den might well be the Christmas treat that arrives a month early.