Bloody Sunday, 1920: Too many historians spoil the doc

Review: They offer multiple perspectives, but the volume of testimony is overpowering 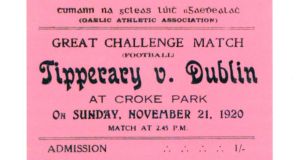 Bloody Sunday, 1920 (RTÉ One, 9.35pm) is an earnest if occasionally convoluted attempt to tell the story of that day of mass slaughter in Dublin. It is forensic in its narration of the events. And it chillingly evokes the horrors the match-goers must have felt as the Auxiliaries and Black and Tans opened fire at Croke Park.

The documentary, adapted from Michael Foley’s book The Bloody Field, begins with a chronicling of the assassination of the “Cairo Gang” of British intelligence officers by Michael Collins’s “Twelve Apostles”.

“They’ve been identified and noticed as fellas who did what they were told - they were good volunteers,” says Dr Anne Dolan of Trinity College, Dublin of the squad. “There’s a certain sense that younger men, late teenage years, their conscience hasn’t developed to the same degree that it may in the next 10 years and they may well be more prepared to do certain things than their older peers.”

“I put the two of them up against the wall,” says Vinny Byrne, one of the “Apostles”, in an archive interview. “I said, “the Lord have mercy on your souls”.

One issue is that the documentary makers seem to have interviewed every historian in Dublin and beyond. The talking heads bring often diverging perspectives.

Such an approach reflects the widely-accepted belief that commemorations of the War of Independence and the Civil War should strive for nuance and resist framing history in black and white. Yet squeezed into a 60 minute documentary it can make for overwhelming watching.

We move on to the shootings at Croke Park. The sheer weight of testimony again risks overpowering the viewer and it is worth asking whether the film might not have benefited from a longer running time (perhaps it should have aired over two evenings).

And yet the terror of the day cuts through: we hear of a man fleeing with his fiancé only to feel her hand go slack as she is gunned down, and of a young boy shot in a tree.

The story continues with the official cover-up, with the Crown forces relying on dubious testimony that they were fired upon first. A contrast is drawn between the state funerals of the slain Cairo Gang and London’s insistence that the 14 who died at Croke Park massacre be buried discreetly.

Eight were put in unmarked graves. Bloody Sunday concludes at the graveside of Jerome O’Leary, who was killed at age 10. In 2015 a headstone was finally put up at his grave.

“When you get to put a gravestone up for a relative who has basically been forgotten apart from your own family for 100 years – there’s closure in that,” says Michael Foley before the final credits.