Review: As Ray D’Arcy reunites with Zig and Zag and Dustin, it’s clear everyone is winging it 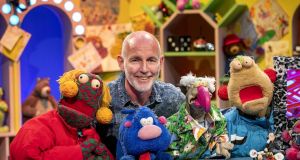 RTÉ was taking a risk bringing back beloved 1990s kids show The Den (RTÉ  One, 6.30pm) but the gamble pays off a treat during a riotous first episode. What’s great is how low-stakes the whole thing feels. The jokes don’t always work.

Ray D’Arcy spends much of the time being shouted down by puppets Zig and Zag and latex turkey Dustin. Nobody seems to know quite what is happening. It’s perfect.

As D’Arcy reunites with Zig and Zag and Dustin, it’s clear everyone involved is largely winging it. There’s a phone-in competition and an on-air quiz in which three housemates win a new TV and a year’s supply of crisps.

It shouldn’t work and often it really doesn’t. Yet it turns out that one thing Irish television excels at is feelgood anarchy

But mostly it’s just three slightly tatty puppets and D’Arcy flying by the set of their zogabongs. It’s everything you could wish for.

The new Den functions as a partial vindication for D’Arcy, who had faced criticism for his Saturday night chat show (essentially the Late Late Show only less riveting). He’s in his element here. You can almost see the years fall away as he banters with Zig and Zag.

The biggest surprise is how quickly the 60 minutes flashes by. An hour of wise-cracking puppetry sounds like a stretch, even allowing for the massive nostalgia factor. However, The Den is cleverly padded out. Singer CMAT – aka Co Meath native Ciara Mary-Alice Thompson – is wheeled out in a phone booth to duet with Dustin on Islands in the Stream.

A sketch segment meanwhile sees Zig and Zag pretending to be American and telling terrible jokes. Ronan Keating pops up on Zoom to chat to two fans who originally appeared on The Den as kids. Dara Ó Briain joins to plug his book about aliens (“25 years later, still can’t get a word in edgeways,” he tweets immediately afterwards).

It shouldn’t work and often it really doesn’t. Yet it turns out that one thing Irish television excels at is feelgood anarchy. That was always The Den’s selling point. And 30 years since D’Arcy made his debut in the slot and 10 since The Den went off air, this is a brilliantly rowdy return.

It says something about the Irish psyche that an hour of deranged puppets flinging low-grade insults is precisely what we need right now. But need it we do and The Den rises to the occasion wonderfully.

There’s no place like home: The Wizard of Oz, 80 years on