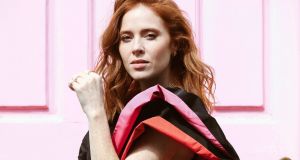 Angela Scanlon: ‘I sound like a total granny, but I have never watched Love Island – it’s just not a show that’s appealed wildly to me’. Photograph: Julien Behal

I do love Brian Cox in Succession. I think he’s absolutely fab; I believe wholeheartedly that he’s an asshole billionaire. Obviously, he gets quite vocal as Logan and has these outbursts, but it’s also just his looks and general demeanour – he’s so aggravated constantly. I love Kieran Culkin, who plays Roman, so much, too, and the slightly wayward one, Connor [Alan Ruck]. When you’re not fighting for scraps and you can do whatever the hell you want, you would think that sibling rivalry wouldn’t be as bad, but actually it’s all about survival because their father doesn’t see any of them. It could’ve been showy and a bit obnoxious, but the family dynamics are fascinating.

Ruby Wax interviewing OJ Simpson on Ruby Wax Meets. He thought it would be a good idea to open the door holding a banana like a knife going “ee ee ee ee” in full horror-stabbing motion. It’s the kind of telly that doesn’t happen very often – it’s almost like he forgot the cameras were there and that he was exposing himself so much. I love that and I love Ruby generally. She’s gone more into the mental health side of things and written some brilliant books, but I miss her on telly.

The last show you loved

The Morning Show on Apple TV+. Jennifer Aniston was absolutely brilliant in it, as were Reese Witherspoon and Steve Carell. I think it’s a fascinating insight into the TV world. You get all of the workplace dynamics, but there’s a lot more to it. There’s a scene where Jennifer’s character has the biggest hissy fit in her daughter’s college dorm, which is particularly great.

I sound like a total granny, but I have never watched Love Island – it’s just not a show that’s appealed wildly to me. I think the way reality TV has gone just doesn’t really do much for me any more. The contestants aren’t “civilians”, as they used to be called when Big Brother started, going in without any agenda. What was so appealing about watching it then was the social experiment side of things and the fact that you were watching a bunch of strangers interact with each other. Going on reality TV is a shrewd business move now: I miss the innocence of how it used to be.

Schitt’s Creek, about a rich family who lose everything and have to move to a hotel resort in the back end of nowhere. It has become less guilty lately, because everyone’s watching it now, since the Emmys. I watched it before I had my daughter – I would come home with, like, morning sickness in the middle of the day and lie on the couch and suddenly be six episodes in. It’s total pantomime and very clever, but not in a conceited way. Dan and Eugene Levy, who are father and son, write and star in it and it’s a really nice look at family dynamics.

The show that should never have been cancelled

I’m slightly biased, but I think Robot Wars, which I presented, should still be on TV. I’m going to go with the educational angle here, rather than just the job for me. We had just started to get quite a lot of girls involved, because until then it was a show that lads watched with their [science, technology, engineering and mathematics] subjects, which was not my motivation for getting involved in the first place, but was great. It was just these amazing little pockets of people building robots and being celebrated nationally for that hobby – and the robots had got much better and more powerful. We were just getting into our stride. – Guardian

Angela Scanlon presents The Noughties on BBC Two and iPlayer