Where can I watch the US election on TV and online? 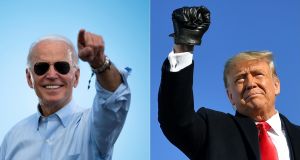 US election: Due to the time difference, coverage on this side of the Atlantic will begin sometime after 11pm. Photograph: Jim Watson/Mandel Ngan/Getty

You’re probably still a bit jittery after all those Halloween horror movies, so you might be looking forward to a quiet few weeks watching soaps and period dramas. But some people are gluttons for punishment, and on Tuesday night they’ll be tuning into what could well be the scariest thing on TV this year: the US presidential election results.

If you thought spending a night in a haunted house was a challenge, try lasting the night watching as America decides who will be its next leader. It promises to be a real fright night, and – despite Covid-19 advice from health officials – most of us will be watching with our hands clasped firmly over our faces.

Because of the time difference, coverage on this side of the Atlantic will begin sometime after 11pm and continue on through the night, with plenty of post election analysis if the matchsticks in your eyelids are still holding up.

But it won’t be the same as staying up to watch the Oscars. At least with the Oscars, you’ll know who won Best Movie by the time you flop into bed at 9am. But because of the huge number of postal ballots to be counted, chances are we still won’t have a clear winner by the time we emerge blinking on Wednesday morning.

All eyes will of course be on the handful of battleground states that could decide the electoral college vote, and we may know quickly enough who’s carried the crucial state of Florida. Otherwise, it’s all up in the air, and the coverage is likely to keep us in suspense right up to the final count.

Add in the tensions stoked up by Donald Trump over postal ballots, not to mention that this election is probably the biggest test America’s democracy has faced, and you have the makings of a real nail-biter. So pace yourself – you don’t want them bitten down to the quick with six hours still to go.

So strap yourself in, keep the rescue remedy on hand, and follow our guide to watching the US election on telly and on the web.

Ireland’s national broadcaster will be covering the election results on RTÉ One throughout this long, dark night for America’s soul, beginning with a US Presidential Election Special starting at 11.15pm and continuing late into the night. Don’t panic: you’ll be in the capable hands of RTÉ’s Washington correspondent Brian O’Donovan, whose affable presence will sugarcoat the bitterest news coming out of the US. Meanwhile, back in the RTÉ studios, Caitriona Perry, a former Washington correspondent, will take charge of the whole circus, with help from Robert Shortt and Carole Coleman.

At 3.30am, the baton will be handed over to CBS News in the US, with a simulcast of its US presidential election coverage until around 6am.

At that stage, you can stop for a bit of brekkie while listening to Morning Ireland’s analysis of the results on RTÉ Radio One, with Richard Downes in Washington and Rachael English in Dublin, kicking off a whole day of coverage of the election aftermath.

You can also tune into a special episode of RTÉ’s US election podcast States of Mind on Wednesday morning, hosted by Brian O’Donovan and journalist Jackie Fox.

On Wednesday evening, as most of us will be waking up from a long, well-deserved nap, there’ll be more coverage of the aftermath via a Prime Time special, with Richard Downes.

Auntie Beeb will be fulfilling its public broadcasting remit by bringing coverage of the election across BBC One, BBC News Channel and the BBC’s iPlayer. We can’t get iPlayer here, but the election will also be broadcast internationally on the BBC World News and streamed live on the BBC News website.

The BBC’s coverage begins at 11.30pm and continues until 9am on Wednesday morning.

The programme will be hosted by Katty Kay in Washington, with Andrew Neil anchoring in London. Jon Sopel and Clive Myrie will be “embedded” in the Trump and Biden campaigns, while reporters Emily Maitlis and Nick Bryant, among others, will be parachuted into the battleground states to explain – yet again – how that electoral college thing works, and why the election outcome is usually decided by just two or three voters in a shotgun shack in Michigan.

Christian Fraser will be explaining the election ins and outs with help from a giant graphic screen and a host of political experts and strategists, and Tina Dahely will be contributing the latest breaking news from the voting.

Sky News is giving it socks for the US election, with live results, expert analysis and special guests, but never mind that. The real bells and whistles is the station’s “augmented reality” studio that will allow you to visualise which candidate is leading the “Race to the White House” as the results from each state comes in. Cool.

The coverage begins at 10pm with the results programme America Decides, anchored by Dermot Murnahan and featuring Sky’s US correspondent Cordelia Lynch and guests including former Trump aide “wacky” Omarosa Manigault Newman and former British ambassador to the US Kim Darroch. Sky will be teaming up with NBC in the US – both are part of the Comcast Group – to bring the most accurate and up-to-date data on how the election count is going, and deliver real-time results from every state and county in the US as it goes either red or blue.

You can get Sky News via Sky TV channel 501 or on Freeview channel 132. The Sky News website will also be streaming results live in case you can’t get to a telly set.

Virgin Media will be teaming up with CNN to bring extensive coverage of the election results on the night, including live segments from Washington. It kicks off on Tuesday night at 10pm, when Matt Cooper and Ciara Doherty give their take on the election in The Tonight Show. They’ll be back again at the same time on Wednesday and Thursday night to bring more analysis on the fallout.

On the morning after, from 7am to 10am, Mark Cagney and the team from Ireland AM will be there to help us through our election hangover.

Irishtimes.com will be running an election liveblog and news updates throughout the night and day.

All of the major TV stations will be streaming results on their websites, but also check these sites out for results and analysis:

Politifact.com
The website run by the Poynter Institute aims to fact-check every utterance and outburst by US election candidates, using its Truth-O-Meter. It will be keeping a close watch on election results, but not by standing outside polling stations with automatic weapons.

FiveThirtyEight.com
Set up by statistician Nate Silver, who is its editor-in-chief, the 538 is named after the number of electors in the Electoral College, ie, the ones who really decide who will be the next president, and not the millions of voters who turn out. The site has some in-depth analysis of the election, with such articles as “I’m here to remind you that Trump can still win” and “Is Joe Biden toast if he loses Pennsylvania?”

CNN.com
Available on Virgin Media Television, depending on which package you’re on, CNN has the Trump stamp of disapproval, which means it’s a reliable news outlet that is largely critical of Trump and his disruptive style of politics. If you can’t get it on your TV package, the website will feature extensive coverage of the election results.

Foxnews.com
Fox News will be broadcasting full, unbiased and impartial coverage of the election results online. Alas, that’s only available in an alternative universe. In this universe, the channel will be doing its usual Trump cheerleading.

NYTimes.com
Trump’s newspaper nemesis, and the one that broke the story of his industrial strength tax-dodging over an inglorious career, the New York Times can be relied on not to heed Trump’s “fake news” whines, or bow to any of his sinister threats against the media.