The Crown: The queen’s nasty side looms into view 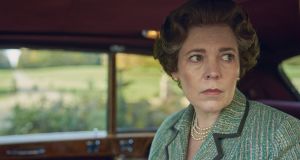 Until this season of Netflix’s The Crown, it seemed obvious where writer Peter Morgan stood on the subject of Queen Elizabeth II. He had his quibbles about the royals, yes. But he saw the House of Windsor, and Elizabeth specifically, as a force for good in British life. She was serious about the burdens of office and her duty to her people. Morgan, whose previous dramas about Tony Blair and Richard Nixon have been far more scathing, saw Loyal Liz as being on the side of the angels.

Has he had cause to revise that opinion? The Elizabeth (Olivia Colman) we meet in series four of The Crown (arriving Sunday on Netflix) is far less agreeable. She does not gaze down at us from a pedestal. Instead the queen comes across as petty and boorish towards Margaret Thatcher and a young, coltish Diana Spencer. While the season isn’t a straightforward case against the Windsors and hereditary monarchy – Morgan would be never so gauche – it does feel rather disapproving.

Elizabeth’s interactions with Margaret Thatcher are particularly revealing. Gillian Anderson is inspired casting as the most divisive prime minister in recent British history (current incumbent excepted). She plays Thatcher with neither a wink nor with the implied understanding that the Iron Lady may be the true villain of the piece.

Thatcher, after all, saw herself as the new broom Britain desperately required after decades of decline. Anderson’s take reflects that. And it is extraordinary how sympathetic you are made feel for her as, upon receiving the keys to 10 Downing Street, she is required to stage a pilgrimage to Balmoral to weekend with the Windsors. What an awful bunch they are.

We watch them playing childish games (Thatcher is aghast). We see that they view ordinary people as amusements to be applauded or laughed at (this is revealed to Thatcher as she is forced to attend a caber-tossing contest). Elizabeth might not be a snob in the Hyacinth Bucket sense but she is divorced from the real world. And from the challenges “commoners” such as Thatcher must overcome to gain high office.

She is also portrayed as emotionally constipated. In one hugely contrived early scene, Philip (Tobias Menzies, bringing just the correct amount of twinkle) insists to her that everyone knows which of their children is her “favourite”. Elizabeth is flabbergasted, insisting she doesn’t have one.

The truth is she barely knows any of her offspring. This we learn as she arranges for one-on-one sit-downs with each of her brood. As preparation, she has staff put together a dossier of her children’s likes and dislikes – as though she was lunching with a head of state.

With the potential exception of the young Prince Anne, the kids are, in any event, ghastly. Edward is a snob – albeit one who suffers horrific bullying at school. Andrew is a Lord Flashheart style cad/idiot who thinks nothing of landing his helicopter on the lawn. And then there is the insufferable Charles (Josh O’Connor). He has never outgrown his infantile certainty that the world revolves around him and is busy building his own private Xanadu in Gloucestershire (just a nod and a wink away from Camilla).

The nasty factor is dialled up further as Diana (Emma Corrin) enters the fray. The Crown tries to have it both ways with her. She is presented as fame-hungry and even perhaps slightly manipulative. And yet no punches are pulled in depicting how the Windsors abandon her as she struggles with Charles’s “friendship” with Camilla and with her own difficulties with life in the “Firm”.

This comes to a head as she and Charles set off for Australia on a state visit and she refuses to be separated from the infant Prince William. Charles isn’t much bothered either way and apathetic towards her distress. And he’s downright furious as she grows into her role and is soon overshadowing her husband.

The determination of the Windsors to clip her wings becomes a theme toward the end of the season. The queen, along with the rest of the family, is horrified by Diana’s desire to negotiate celebrity and high office on her own terms.

The exception is Princess Margaret (Helena Bonham Carter) – whose great romance with the married Group Captain Townshend was, of course, snuffed out by a young Elizabeth in season one. Back then, Morgan could not bring himself to frame the queen negatively. He has no such compunctions this time and The Crown does not spare us a portrait of the British monarch that reveals her to be aloof, oblivious and indifferent towards Diana’s terrible unhappiness. It’s the crowning achievement of what is arguably the show’s most riveting season to date.

The Crown season four is on Netflix from Sunday, November 15th