The Game – The Story of Hurling: epic clash of history and hype at the speed of a sliotar

Review: With so much ground to cover, an epic three-part documentary on hurling moves at breakneck pace 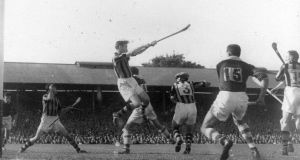 The Game – The Story of Hurling: “Nobody owns hurling. Hurling just lives.”

The voices come in a cascade of reverence. “Hurling’s a game for the gods,” proclaim the first soothing, familiar tones. “And gods played it.”

“The thrill of that leather ball hitting off the ash,” says another.

“That feel from the hurley: it runs up the handle into your hand, and really into your soul.”

If you love hurling, here is the show for you; an appreciation with more inspiring lines than a blizzard of motivational posters, set against a drift of sumptuously-shot action sequences as rousing as a Guinness ad.

Produced with support from the GAA, the three-part documentary is certainly a champion of the sport: epic in scope, completely earnest in tone and so sprawling in approach it hardly knows where to begin.

Such is the volume of material – the state-of-the-art filming; the amassed interviews with players, commentators, poets and experts; the troves of material from archives, annals and legend – that the show must be divided into endless chapters, each given endearingly twee titles. Chapter 2: From the mist of time. Chapter 3: Sustained by a dream.

That the show includes honeyed romanticisms from Micheál Ó Muircheartaigh is a given (players are described as “The dead who live forever and the living who shall never die”) but that it seems duty-bound to emulate that voice suggests that hurling sees itself as inseparable from myth.

Maybe it is. The series begins not with the creation of the GAA, or the game’s historical antecedents, but with Cúchullain. “You’d love to have him as centre back on your team,” Donal O’Grady says of the famous player, with a relish that suggests the guy is available to transfer. Sometimes the show attempts to tether the game to the turf, as when GAA historian Paul Rouse describes “a universal human experience” of “people hitting a ball with a stick”. (This is the closest the opening episode comes to explaining the rules.)

Mostly, though, the programme sweeps between history, aching sentimentality and the contemporary verve of hype, as though that is the true culture of hurling. So you see fans in county jerseys, writhing in agony and ecstasy, then learn a little about Michael Cusack, the 19th century founder of the modern game, then watch artful shots of young players twisting in silhouette in the waning sunlight.

Historians explain national identity. Players explain county pride. Men insist, “If you’re paying for your club, you’re ready to die for your club”. Footage of bodies crunching against bodies suggests it may come to that. “As long as the tribe is there, the lore is kept alive,” says one prescient voice. But to see Kilkenny’s 100-year-old Dick Walsh happily recalling the viciously contested all-Ireland final of 1931, the reverse may also be true.

That the first episode ends with Seán Óg Ó hAlpín, the Fijian-Irish Cork player, recalling his uneasy position as an 11-year-old new to the community with “different looks”, suggests some anxiety about such a culture’s inclusivity. (The same might be said of its attitude to female contributors, represented so far by just the Camogie Association’s Joan O’Flynn and Cork player Anna Geary. )

“As soon as I started wearing the back and amber [of Na Piarsaigh GAA club], the community accepted me for one of them,” says Ó hAlpín. His story is both inspiring and slightly concerning – if he never wore that jersey, would he not belong? – but it supplies one clear optic into the game. With so much ground to cover, though, the show prefers the restless perspective of a sliotar, hurled at speed from one player to another, one place to the next. I lost count of its points, without ever seeing the goal.