Podcasts: the former president and her co-host, the comedian Maeve Higgins, meet the women driving change in climate policy. It couldn’t come at a more appropriate time 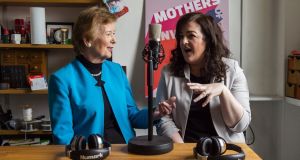 There is something beyond thrilling about hearing former president Mary Robinson speak in the context of a podcast, and it’s clear that her co-host, the comic and writer Maeve Higgins, feels that excitement too. It’s contagious – a welcoming energy around a robust, heady conversation about an issue that is bearing down on all of us, quietly and consistently: climate change. This feels incredibly relevant – Europe is in the grip of a heatwave, wildfires in Greece have claimed more than 70 lives, and more than sixty have died in Japan’s heatwave. Against the backdrop of such natural disasters, this is a timely and important listen.

How can we say that climate change has a feminist solution? This is Mothers of Invention’s primary query, and the answers are laid out clearly and concisely. Robinson posits that climate and gender intersect, and the episode goes on to explore this. Her expertise is outstanding – and her dynamic with Higgins is nothing short of lovely to listen to. Higgins is earnest and holds humour and sincerity in each hand, and Robinson is her foil in some regards, but this works beautifully. You can hear the respect the two hosts have for each other loudly and clearly, as well as their specific curiosity and passion for this conversation about climate.

The interview subjects in this episode are each focused around legal aspects of climate change. One case study examines how a group of Dutch activists sued their government over climate change – and won. This study asks an important question: where do guilt and accountability land with climate change, and what can be done with that? How urgent is any government’s responsibility to turn swiftly towards sustainability? The Dutch group’s next move is taking Shell to court for producing 2 per cent of all global emissions since the Industrial Revolution.

The podcast touches on the close correlation between climate and human rights – the primary guest on the show, Tessa Khan, is an accomplished lawyer who works specifically in this field. Her insights, specifically surrounding how Asian women’s rights movements focus on climate change alongside economics, education and other issues, are largely rooted in western feminism.

Another case study looks at a group of American students who are taking their government to court over climate change. This podcast is about women asking questions and taking action and there is something profoundly inspiring about it: a heady, robust conversation that is both accessible and inviting. There is only one episode available to listen to at the moment, but this is a really different, urgent listen, and I’ll be waiting for the next one. While the world gets hotter around us every year, it might feel as though there’s little we can do, but Mothers of Invention gives a valuable insight into the women who are pushing back.

Hands off the Toy Show: Why the Grinch can’t steal our Late Late Christmas
8