Succession: The comedy drama that’s definitely not about the Murdochs 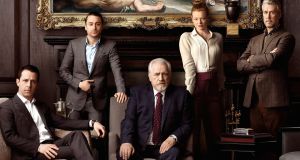 An ageing and cantankerous media billionaire is living in New York with his third wife, surrounded by a brood of children and hangers-on who spend their time squabbling over who will inherit the family conglomerate. Desperate to win the favour of their foul-mouthed father, the offspring spend their time taking over online startups and arriving at family gatherings in helicopters – anything they can think of to impress the mogul.

So far, so familiar. But Jesse Armstrong would like to make it absolutely clear that Succession, the writer’s new big-budget drama series, is definitely not about a certain Australian-born media magnate. “It’s not bullsh*t to say it really isn’t the Murdochs,” says Armstrong, who previously wrote an unproduced film script about Rupert Murdoch and his family.

Instead, he suggests that such a comparison might be the result of there being a relative lack of high-profile media barons in the UK. “It could be a parochial view – that because it’s a media family, it must be the Murdochs.”

What is clear is that the 10-part series, which aired in the US on HBO earlier this year and combines sweary comedy with high-stakes drama, plays into the increased fascination with how global businesses shape our media consumption – and thereby our politics.

In the opening episode, the ailing 80-year-old Dundee-born Logan Roy – played by Brian Cox – toys with his children’s desire to take control. Anointed heir Kendall bounds into a skyscraper listening to Beastie Boys – perhaps a nod to James Murdoch’s brief career running a pioneering New York hip-hop record label after dropping out of Harvard. Kendall is trying to clinch a deal to take over a Vice-style startup, while being taunted by aides who ask if he wants to phone his father for help. Then misfortune strikes at a family party.

When it becomes clear that the succession isn’t going to plan, Kendall’s three siblings – Connor, Roman and Shiv – begin circling, setting up a series of conflicts in which each compete for control. While the offspring seem detached from reality and are prone to preposterous outbursts, they also have the same weaknesses, the same desire to be loved, as any other individual.

“They’re human beings,” says Armstrong, “and they’ve been given a set of values. As someone who comes from a super-famous dynasty, how do you escape that? It’s not a situation everyone is going to feel is tragic. Some people will just feel, ‘Fuck them – they’ve got so much money and power.’ But if you care to think about it, this is also a form of a tragic situation.”

Armstrong’s dialogue is sharp and vicious. In the first episode, Shiv’s partner Tom sums up the family’s attitude to money, after spending thousands on a gift for Logan, a luxury watch that will soon be discarded by the billionaire. “Every time you look at it,” says Tom, “it tells you exactly how rich you are.” Later, a doctor treating Logan is given the warning: “The socioeconomic health of several countries is dependent on his well-being.”

In the world of US TV, which is the wealthiest media market on the planet, the Murdoch dynasty is far from alone. America’s biggest companies are often controlled by a single family, meaning the stakes are higher and the sibling rivalries more vicious. Armstrong mentions the Sinclairs , a Trump-friendly right-wing family “who are buying up the majority of local TV stations where most Americans get their news”.

Then there’s the likes of Sumner Redstone , who controls CBS and Viacom. The ailing 95-year-old, who has had a long-running dispute with his daughter, as well as multiple substantially younger girlfriends, over who should inherit his fortune, now lives the life of a decadent recluse in his LA mansion. One recent report claims he now communicates through an iPad loaded with audio clips of his voice saying “Yes”, “No” and “Fuck you.” As Armstrong says: “The Redstone stuff is either tragic or good – depending on whether you’re a human being or a writer.”

Another influence is the Roberts family, who control Comcast, the US cable TV giant that owns the NBC network and is currently fighting Rupert Murdoch in a multi-billion-pound battle to take ownership of the highly profitable Sky TV. Just to confuse matters further, Succession will be shown in the UK on Sky Atlantic, which will mean that a certain media billionaire could do quite well if the show is a success. It’s also just the sort of big-budget quality TV show that audiences might be willing to pay to watch, helping to prompt the very deals the show is satirising.

If you’re interested in the state of US politics, you don’t have to be a supersleuth to figure out that the media climate has been key in creating that

“We had a lot of places to steal from in terms of dynastic politics and family dysfunction,” says Armstrong, who says humour is what lifts the show from boardroom drama to something that captures the chaotic reality of life in a multi-billion-dollar media empire. “If you left out the comic element, the petty bad decisions, the crappy corporate structure, the shitty artistic choices, the humiliations – then you’d be doing PR for them. Comedy has to be part of how you portray these people.”

The show also reflects on how the world got into its current state, with Donald Trump in the White House. “If you’re interested in the fucked-up state of American politics,” says Armstrong, “you don’t have to be a supersleuth to figure out that the media climate has been key in creating that.”

Succession represents a career high for Armstrong, with HBO not only backing it but already booking a second series. The show, which has Will Ferrell as executive producer, launches Armstrong into the big league of US television, where the budgets are bigger and the stakes higher. Not bad for a man who began his working life in the mid-1990s with a brief stint as a researcher for a Labour MP. He soon turned to comedy, working with Sam Bain to create Peep Show, before Armando Iannucci put the pair to work on The Tick of It.

The latter, which took a hilarious swipe at the inner workings of government, has had an enormous influence on British political culture – though not in an entirely positive way. Many of today’s twenty- and thirtysomething political journalists and advisers use the show as a primer for a day at the office. As a result, it’s often said in parliament that the only difference between the programme and modern Westminster is that in The Thick of It, people don’t wander around muttering: “This is like something out of The Thick of It.”

When journalists were texting Jeremy Corbyn’s team during the attempted Labour coup of 2016, one reply confirmed that the Labour leader would contest any leadership election – by using a quote from the show’s foul-mouthed spin doctor Malcolm Tucker. “It’s on like Fat Pat’s thong,” the text said.

“You can’t control how things that you’re involved with are received,” says Armstrong. “But The Thick of It wasn’t intended as an instruction manual. Writers like hearing how bits of this stuff have got out into the world – but it was not meant to be a joyful celebration of the way these people behave.”

He has no immediate plans to return to the world of British political satire. And, despite writing for Veep, which starred Julia Louis-Dreyfus as the US vice-president, Armstrong has no intention of working on a show about Donald Trump. Anyway, he says, the supporting characters around a leader are often more interesting than the boss.

“Trump is just extraordinarily unusual ,” he says. “He’s a different target, a different figure. I don’t buy the thing that you can’t do satire in the age of Trump. You just have to be funny and figure out the angles. If I was going to do Trump, I wouldn’t take it head on and look directly at the sun.”

Brian Cox has drawn comparisons between Logan Roy and King Lear, a notion Armstrong picks up on, talking about the fascinating moment when a leader chooses how to distribute his vast power. “There’s a reason we have a lot of pomp and ceremony around coronations and the transfer of power in democracies,” he says. “It’s a scary moment. The rules aren’t clear. For a moment – whether it’s the Roman empire or Florida at the Bush recount – anything can happen.” – Guardian