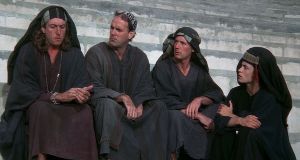 A scene from Monty Python’s Life of Brian.

Unseen sketches from Monty Python have been discovered in the archives of Michael Palin.

The material was deposited at the British Library last year and it has now been revealed it contains unused script ideas, including two sketches written for Monty Python And The Holy Grail.

One of the sketches is about a Wild West bookshop while another features an “amorous Pink Knight”.

They will go on display to the public along with more than 50 notebooks containing notes on two of the Pythons’ films, Holy Grail and Life Of Brian.

Material deemed controversial at the time was discarded and would even be seen as too risque today, according to the London Times.

Palin (75), has given permission for the sketches to be reproduced and said the group often produced more material than was needed.

“Sometimes you have things like that. I can’t think why it wasn’t used. The Holy Grail took shape gradually and at the beginning it had far more ideas in it than ended up on screen because you had to have a narrative. In the end the story of the knights was strong enough.”

The material was donated to the British Library by Palin last year.

The archive spans the writer, actor, comedian and TV presenter’s literary and creative life for more than 20 years, from 1965 to 1987.

On Monday, Cleese suggested the reason Monty Python’s Flying Circus is no longer regularly shown on TV is because it’s “too funny” compared to modern comedies.