Boy George: ‘My Irish family’s story is like a great Irish song, a lament’

‘Who Do You Think You Are?’ review: Tragedy for singer’s ancestors in early 20th-century Ireland 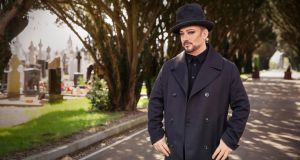 Boy George appears in ‘Who Do You Think You Are?’ Photograph: Stephen Perry

The famous faces exploring their roots in Who Do You Think You Are? aren’t just tracing their family history, they’re trying to understand their own destiny. Singer Boy George almost says as much at the conclusion of his own trawl through the lives of his recent ancestors, one that takes him through a history of early 20th century Ireland.

Standing in Glasnevin cemetery, he remarks: “This story is like a great Irish song. It’s the sort of thing you’d hear someone singing at a funeral or a wedding . . . a traditional lament.”

Crowe provides one fascinating image, of a family from the Dublin slums, in which a small boy wears a dress; the only clothing available

The story of Boy George’s ancestors is indeed full of tragedy – of dispossession, separation, incarceration and even execution – and it’s easy to get the impression, as each new chapter is revealed, that George was fated to sing it. “I was the pink sheep of the family,” he says early, with a customary laugh and eyes that tend to seek an audience; a mannerism that becomes more potent the more the show reveals. Of his grandmother, a woman both caring and severe, his mother Dinah recalls her instruction: “You better nurture that child. He has a beautiful voice.”

Like many people over the show’s 15 series, the O’Dowd family (to use George’s given name), know some of the story, but the details are either hazy or semi-erased. Nanny Glynn – Bridget Margaret Kinahan – was brought up in a punishing industrial school, found wandering the streets at the age of six. But the full truth is still more heart-rending.

In Dublin, historian Caitríona Crowe explains how the NSPCC “cruelty men” often separated children from their families for spurious reasons. Far from wandering, Bridget was taken from right outside her home, from a tenement family too poor – and ultimately too sick – to protect her.

Crowe provides one fascinating image, of a family from the Dublin slums, in which a small boy wears a dress; the only clothing available. “That would have been me,” quips George.

The more frequent sensation George reports, though, is anger. Bridget, he reckons, “got on with it”, found an education, a job and a husband; but if his mother remembers “incredible sadness in her eyes”, now he feels the reason for it.

A much-revered family story, celebrated with rebel ballads, is a connection to Kevin Barry, the first executed Irish Volunteer. George’s great uncle, Thomas Bryan, was also a radicalised young man, stirred by the executions of the Rising leaders into joining the Irish Volunteers. “She definitely went for a bad boy,” George says, studying a picture of his great aunt, Annie Glynn with Bryan. “That seems to be a family tradition.” If you didn’t laugh . . .

Bryan’s fate was a yardstick of imperial cruelty – arrested and tried, under martial law, for performing a military drill, and hung. George visits both his cell (“It’s almost like a tomb.”) and his gallows (“It’s like a macabre theatre.”) where one historian insensitively offers him a go of the hangman’s lever. But nothing is as evocative as the words of the man himself, writing, “It is our women who suffer the most,” while worrying for his unborn child. George, too, has instinctive sympathy for the women, whose stories are so seldom studied. The baby, we discover, survived just one day, four days before Thomas was hung.

“I really hope he didn’t know,” says George. The story, he admits, is sadder than he imagined, and in the laugh that follows you appreciate its protective reflex. (Do you really want to hurt him? Do you really want to make him cry?) “Such an incredible story. It’s mad that no one ever talked about it. They will now. I’ll make sure of it.”

He seems well placed to do so, alive to the weight of a family’s pain with a voice fine enough to honour it.

From Narnia to Harry Potter: The grown-up messages in children’s books
8