Podcast of the week: Heavyweight 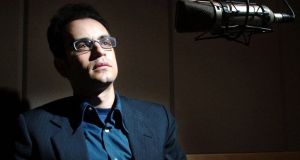 Jonathan Goldstein: plays something of a heel throughout, though not an entirely unlikeable one

Rarely has a recommendation come so feverishly as when a friend said she would never speak to me again if I didn’t listen to Heavyweight. The following night I gave an episode a shot. Then another and another, and I was between laughter and astonishment throughout.

It is produced by Gimlet Media, a sort of super-studio of podcast production. It has huge budgets, and it shows: the production and editing are impeccable. The central thesis of the show is: Jonathan Goldstein is here to help you out with your heaviest problems – kind of. Every episode focuses on a person and a problem, and Goldstein propels that person towards a solution, though not always one they want or expect.

In one episode we meet an actor who swears he broke his arm as a child, though none of his family can remember him doing so. Goldstein and the actor, Rob, set out on a quest to find out the truth about the broken arm. In another episode, which feels like an urban legend, Gregor would like some CDs returned to him by somebody he loaned them to, many years ago. To tell you any more about the CDs, or the person he loaned them to, would destroy one of the finest pieces of modern storytelling I’ve heard. It had me doubled over laughing, and hanging on every minute.

In another episode a woman, Rachel, has a much sadder story: she had a daughter by a man she dated in college and never told him. Goldstein helps her find him and tell him – and tell her daughter who her father is. This is all handled with incredible levity, humanity and humour. It is handled beautifully.

Goldstein is a really unusual host, playing something of a heel throughout, though not an entirely unlikeable one. Given the scope of the problem-solving he’s undertaking, the temptation could be to lean into a virtuous journalist character. But he doesn’t: he cracks mean jokes, delivers dry commentary and saves the podcast from ever becoming saccharine. Heavyweight is remarkable and entirely its own beast. Start with the episode Gregor and tell everyone you know.