Review: His character dabbles in heroin, befriends sex workers and assists a suicide 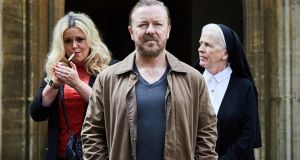 Ricky Gervais in After LIfe: slovenly, hard-drinking and misanthropic

Everyone is very concerned about Tony, a man affected by personal tragedy. Once, the protagonist of After Life (Netflix, now streaming) was apparently a fun guy. Or maybe just a less obnoxious one. It’s never quite clear what Tony was like before the death of his wife, from cancer.

But the man we meet since her passing – slovenly, hard-drinking and misanthropic – is obviously a repellent creature. In the opening minutes of the series, he calls a mildly annoying stranger “a fat, hairy c**ks**ker”, brands his lethargic postman an “idiot”, and retorts to a primary school child, “I’m not a paedo, and if I was, you’d be safe, you tubby little ginger c**t.”

Grief works upon us all in different ways; its various stages capable of smothering and distorting our personalities. In Tony’s case it is more horrifying, transforming this local paper journalist utterly, and irredeemably, into Ricky Gervais.

“A good day is when I don’t go around wanting to shoot random strangers in the face and then to kill myself,” he tells his therapist, played by Paul Kaye, as yet another of the unbearable idiots who surround him.

Nothing irritates Gervais more than someone who is overweight (another stranger is “a fat c**t eating like a fucking slug”), or boring (like the criminally under-used, or perhaps safely contained, Diane Morgan), presumably because we most deplore in others what we dislike in ourselves.

It’s unlikely that Tony has any more self-insight than Gervais, though. The comedy flatters itself that it is dark (Tony later dabbles in heroin, befriends addicts and sex workers, speaks constantly of suicide and even assists in someone else’s) but it’s merely childish.

Tony, of course, reserves particular scorn for actual children, here represented as either bullies or thugs, against which he bravely fights back several times. He does love animals, the show stresses, much like Gervais, Tony Soprano or Hitler.

We know nothing else about her, but Tony’s dead wife mollycoddles him from beyond the grave, via a limitless number of direct-address videos (“It’s not ideal to be a fat, self-pitying lazy lump,” she says, alas, too late for rewrites).

Their relationship seems to have been measured out solely in one-sided pranks: Tony waking her with the blast of an airhorn; Tony waking her with a splash of cold water; Tony alarming her with some other bullshit. His wife protests but always sees the funny side. No wonder Tony is so depressed. He’s lost his adoring audience.

Perhaps that’s why any number of sympathetic women will reassure Tony over the course of the series that he is, indeed, very funny: Mandeep Dhillon as a new recruit at the paper, Penelope Wilton as a sage widow by her husband’s graveside, and Ashley Jensen as a no-nonsense nurse in his father’s retirement home.

Gervais, who writes and directs the show, might have thought of this as a comedy about nihilism, but it’s the bewildering, underpinning narcissism that kills it.