TV Review: The programme veers from global economics to the presenter’s frozen eggs 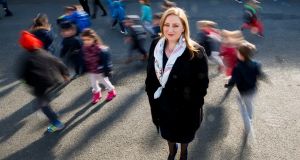 There comes the briefest beat of reassurance in Dearbhail McDonald’s documentary Fertility Shock (RTÉ One, Monday, 9.35pm), a programme whose concerns run from the personal to the existential.

McDonald, the accomplished Independent News and Media business editor, asks one academic researcher, Hagai Levine, if an alarming drop in sperm counts represents a problem for western men. No, he replies. “It’s a problem for mankind,” he says. “For humanity.”

Such is the scope of McDonald’s enquiry, which folds a broad political consideration of fertility and society into a much more personal account of her own fertility journey, that you find yourself as likely to contemplate one person’s future as to imagine the final extinction of the species.

Her programme is a sustained mingling of such macro and micro concerns, touching on everything from global economics to deep emotions, investing attention in something as large as our looming demographic crisis – one that will see more retirees than a workforce sufficient to support them – and something as small, and significant, as her own eggs, frozen in a London fertility clinic where they await an uncertain future.

In a probing paper, Why the Bedroom Matters in the Boardroom, McDonald was just as candid about her own hopes. The adjustments of the television programme, which opens with the admission, suggest she had buried the lede; personalising the implications of Ireland’s declining birthrate.

How naturally this comes to McDonald is hard to say. She seems less comfortable, for instance, interviewing sun-dazed twenty-somethings in Electric Picnic about their reproductive intentions and more in her element peeling back new corporate cultures that cover the cost of their female staff’s egg-freezing “to postpone their reproductive career”.

In one fascinating exchange with Dr Rhona Mahony, former Master of the National Maternity Hospital, and McDonald’s close friend, we learn how dubious that practice is: egg-freezing is hardly a failsafe option. It also hits close to the bone for McDonald, bringing their conversation into a tangle of personal and professional positions. “Were you thinking, ‘Is she insane?’” McDonald asks Mahony. “ ‘She should have done this earlier’.”

Like that dilemma, the challenges facing birthrates, each lucidly presented and explained, may be as insoluble. With a more educated, career-minded population leaving parenthood later, Irish parents are encountering more challenges and having fewer children.

But Ireland is hardly alone. Most industrialised countries are no longer replenishing their populations. One jaunty section enjoys the goofy ad campaigns waged by countries from Poland to Singapore that encourage “replacement rate” jigginess. (Who ever imagined we’d need to sell sex?)

But the statistics are grimmer than an inverted Whitney Houston lyric: I believe no children are the future.

That emphasises the brusque answer McDonald receives from a Danish academic when she asks for a picture of “the reality at a human level” of women leaving parenthood too late. “They’re going to have a life without children,” Soren Ziebe says. “And this is reality for you.”

That appears a more bruising realisation for McDonald than she anticipated, this reality at a human level: “I left Copenhagen with a heavier heart than I had arrived with,” she admits.

The programme features poignant stories from couples addressing their own fertility struggles, although one wonders if they would be as willing to share them if those stories did not have happier endings. Stoic as she is, that puts McDonald in the sobering position of supplying the human face to her own worrying statistics: “Have I left it too late?” she wonders more than once.

This is not a documentary on regret, though. McDonald’s inclination is to lay out facts, the cause and effects behind plunging birthrates, to prompt intimate reflection and big picture considerations.

“So let’s have this conversation now,” she says, “before it’s too late.”