Magenta Devine has died aged 61: A 1980s icon of style and substance

The presenter, who has died aged 61, brought glamour and intelligence to ‘yoof TV’ 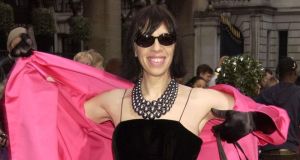 It’s odd to think that, to the under 40s, Magenta Devine, who has died aged 61 after a short illness, is not a household name, immediately conjuring up in the mind’s eye a pair of shades and a designer outfit.

To uncharitable types that description might signify that she was an insubstantial figure, part of a generation of 1980s British TV presenters whose contribution to the medium was frivolous and fashion-fixated and who therefore deserved to be blown away, like superfluous tinfoil wrapping, into permanent obscurity. Sadly, Devine did suffer from depression having departed the limelight and was declared bankrupt in 2003. That, however, was a deeply unfair fate.

Devine was a pioneering figure in a new approach to cultural and current-affairs programme-making that brought the graphic language of style magazines like the Face, Blitz, ID and GQ to the small screen. “Yoof TV” was derided and much maligned in its day, but it represented a thoughtful and concerted attempt to speak to young people in a less staid, more dynamic way, and, despite its bouts of mindless frivolity, it had more than a kernel of seriousness about it, particularly when Devine was holding the microphone.

Magenta Devine was very much of the 1980s, stylish, attractive but never an object of the sort of boorish, sexist attention of the laddish 1990s

Magenta Devine was born Kim Taylor; the name for which she became better known was supposedly invented for her by her friend Pete Frame, a music journalist, back in the late 1970s. She would work at Tony Brainsby’s PR firm, which represented among others Queen, Whitesnake and Thin Lizzy, but more key in her formation was her involvement in the new-romantic scene. A black-and-white photograph taken in 1981 by Derek Ridgers reveals her as quite the subterranean specimen, with her box handbag and cane, long dress and heels, hair cascading in a gothic riot over her as yet unsunglassed eyes.

The new-romantic movement was dismissed as the preserve of cocktail-supping narcissists, flaunting their inauthenticity to a tinny synth-pop soundtrack. It was, in reality, the radical offshoot of the punk movement, a genuine revolt into style, whose frankly courageous practitioners refused to be kept down in the early Margaret Thatcher years. You didn’t merely have to be, you could become; dressing defiantly up, rather than down. Flaunting your invented self rather than knowing your place became almost a political imperative in those recession-hit years.

Having dated and then broken up with Tony James of Sigue Sigue Sputnik, the much-hyped but short lived new-romantic group, Devine began her TV career with Network 7, a Channel 4 show conceived by Janet Street-Porter and Jane Hewland, whose maxim was “news is entertainment and entertainment is news”. Along with her colleagues Jaswinder Bancil and Tracy McCleod, she was one of a raft of presenters whose personalities were deliberately tailored, Spice Girls-like, with her billed by her own admission as the “bitchy one”.

It was a billing she successfully failed to live up to. She was noted for wearing shades constantly; Dame Edna Everage, when interviewed by Devine, gently upbraided her for her choice of eyewear, recommending her own transparent spectacles. Devine herself plausibly explained that “I only wore sunglasses because I hated messing about with eye make-up. I’m useless at it.” She was only persuaded to wear transparent lenses during items on graver topics in her shows.

Certainly, the moral effect her shades had on her was impressive. Unlike later yoof-TV presenters such as Amanda de Cadenet, she was never exposed as poorly briefed, gormless or self-absorbed. I was interviewed by her myself while working for the music magazine Melody Maker (for an item about George Michael) and was impressed by her methodical calmness and discreet, unflappable intelligence. This could have been Joan Bakewell. Whether reporting from the front line of an acid-house event, presenting an informative item on Dublin in the BBC Rough Guides to the World series or calmly putting a typically blustery, snarky John Lydon in his place, she was the appropriate frontperson for a style of TV that, initially at least, sprang from a good countercultural place, genuinely wishing to inform rather than patronise young people.

Later, of course, Yoof TV mutated into the dismal The Word, a braying freak show for the Friday-night back-from-the-pub crowd. But Devine had largely disappeared from our screens by then. She was very much of the 1980s, stylish, attractive but never an object of the sort of boorish, sexist attention of the laddish 1990s. She was forgotten. Now that she has gone, however, she should be remembered as a representative of a lost era of TV idealism, when style and substance went hand in glove. – Guardian