Alan Partridge singing Come Out, Ye Black and Tans both awkward and hilarious 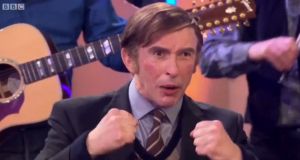 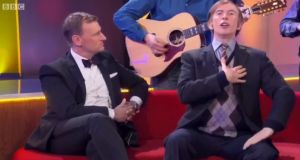 Once upon a time, the idea of hearing Come Out, Ye Black and Tans on primetime BBC One was unthinkable. However, that is precisely what came to pass on This Time with Alan Partridge last night.

Last night’s episode of the spoof magazine show featured Steve Coogan pulling double duty and playing both Alan Partridge as well as an Irish farmer named Martin Brennan, who bears an uncanny likeness to the television host and becomes an Alan impersonator.

Sporting a ruddy complexion and prosthetic teeth, Brennan was pitched as a no-nonsense Irishman, who was utterly bemused with all this celebrity lark.

“I didn’t know who you were,” he told Alan Partridge. “My cousin said you’d be as well being a Martin Brennan impersonator in Sligo.”

The horrific Irish Alan Partridge lookalike on This Time last night will very likely be the image that flashes before my eyes when I die. Joyous/hideous. cc: @RobGibbons_ @neilgibbons

Oh my god that was the best episode. It’s getting better and better. The Irish Alan Partridge lookalike was a stroke of genius. The whole thing is. #ThisTime pic.twitter.com/q6FpHrRk0s

Gentle slagging and squirming ensued, but the standout moment of the evening was saved until the very end.

As the credits rolled, viewers were treated to stirring renditions of Come Out, Ye Black and Tans and The Men Behind The Wire, courtesy of Brennan. Partridge’s reaction? “Oh my God, that was like an advert for the IRA.”

It was awkward, inappropriate, and utterly hilarious. Unsurprisingly, viewers at home lapped it up.

The segment could hardly have come at a more opportune time with rebel songs enjoying a cultural resurgence of sorts. Just last week, Brady’s Family Ham debuted their latest ad in which butchers sing, “Come out you other hams, come and face me, ham to ham…” to the tune of the old rebel standard. Over the weekend, boxer Michael Conlan was criticised for walking into the ring to the strains of The Wolfe Tones’ Celtic Symphony, which features the lyrics, ‘Ooh ah, up the Ra’.

The son of an Irish immigrant, Steve Coogan is a well-known Hibernophile. He previously co-wrote and starred in Philomena, a drama about an Irish woman forced to work in a laundry and give up her son for adoption in the 1950s. During a recent appearance on The Late Late Show, the actor stated that he was midway through the process of applying for an Irish passport.

It’s not the first time Coogan has addressed Anglo-Irish relations through Partridge. In a famous episode of I’m Alan Partridge, the presenter managed to offend two Irish network executives with his ill-informed comments on the Troubles. “Sunday Bloody Sunday. What a great song. It really encapsulates the frustration of a Sunday, doesn’t it?”