Game of Thrones tapestry to journey ‘home’ to Bayeux

Will tourists prefer the real McCoy, or the blood, guts and dragons of the reboot? 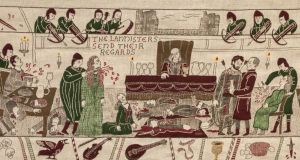 It’s a nice day for a Red Wedding: a scene from the Game of Thrones Tapestry

A thousand years ago Bishop Odo of Bayeux commissioned a tapestry to commemorate the conquest of England by his half-brother William. It was a medieval propaganda coup, casting William in the most favourable light. And it provided a gold mine of information about clothing, ships, chateaux and general living conditions in 11th-century Normandy and England.

Unesco has classified the Bayeux Tapestry a world treasure. It inspired some clever clogs at Tourism Ireland to propose a modern-day equivalent, based on the phenomenally successful HBO television series Game of Thrones, 80 per cent of which is filmed in Northern Ireland.

Like the Bayeux Tapestry, the Game of Thrones Tapestry is woven of fine linen and hand-embroidered, with decorative borders and a central pictorial narrative. It is currently 77m long, and will reach 90m by the end of the eighth and final season of the show, which will start on April 14th.

The tapestry has attracted visitors from all over the world and has been seen by about 150,000 visitors to the Ulster Museum

Thirty women are employed to embroider the tapestry on linen from one of Northern Ireland’s last mills. It was installed at the Ulster Museum in Belfast in July 2017. “It’s exactly like Bayeux,” says Monica MacLaverty, Tourism Ireland’s manager for southern Europe. “The only difference is that the Bayeux Tapestry has no blood. They didn’t have the ability to make it then.”

With more than 30 million viewers watching episodes in the previous, seventh series, the world’s most-watched television programme has been a tremendous magnet for tourism in Northern Ireland. “The tapestry has attracted visitors from all over the world and has been seen by about 150,000 visitors to the Ulster Museum,” says Niall Gibbons, chief executive of Tourism Ireland.

Fans can visit 26 filming locations, all of which have a real name and a fictional name. For example, Castle Ward is Winterfell, the stronghold of House Stark. Visitors can don voluminous cloaks, walk the wolves (in fact dogs), practise archery and feast at a banquet. They can even sit on the Iron Throne, seat of the monarchy of the continent of Westeros, at the Fullerton Arms in Ballintoy. The game of Thrones exhibition at the Titanic Exhibition Centre in Belfast (April 11th-September 1st) also features a replica of the throne.

The Dark Hedges, a beautiful avenue of 18th-century arching beech trees on the approach to Gracehill House, Co Antrim, is another favourite destination for fans, who flock there to take selfies.

When Storm Gertrude blew down several of the ancient trees in 2016, Tourism Ireland had the trees carved into 10 Game of Thrones doors recounting episodes of the series. The doors were installed in pubs and restaurants near filming locations, and have become an attraction in their own right.

Large dragon eggs that vibrate when touched have been strategically positioned in St George’s Market, Belfast. A stuffed crow with three eyes has been placed in the grass outside Belfast City Hall, recalling the three-eyed raven from the series. Belfast Zoo is home to a realistic, remote-controlled dragon with flapping wings.

Tourism Ireland’s ingenuity in exploiting its Game of Thrones connection was rewarded with gold, silver and bronze medals at the annual tourism trade show in Cannes.

Fanny Garbe, the head of communications for the Bayeux Museum in Normandy, heard of the Game of Thrones Tapestry and tweeted Tourism Ireland, saying “Can it come here?”

Perhaps 1,000 years from now our descendents will take the fantasy saga of love and war at face value

As a result the Irish tapestry will make what is billed as an “epic journey” to Bayeux, for exhibition in an annex of the cathedral, from September 13th this year until January 13th, 2020. Visitors will have to pay €12 to see the original tapestry, in its own museum less than 100m away. They can see the Game of Thrones Tapestry for free.

Will tourists prefer the historic real McCoy, or the blood and guts and fire-breathing dragons of its fake news equivalent? Perhaps 1,000 years from now our descendents will take the fantasy saga of love and war between the Houses Arryn, Bolton, Dothraki, Greyjoy, Lannister, Stark, Targaryen and Tyrell at face value.

Tourism Ireland grew out of the Belfast Agreement, which included an obligation to promote tourism. The Republic’s Fáilte Ireland and Tourism Northern Ireland merged. It has been “a success story of peace and Good Friday”, says MacLaverty.

But British visitors have decreased 7 per cent due to the decline of sterling over Brexit jitters. So far they have been more than offset by North American and European tourists. Two-thirds of them enter the North via the Republic. “The island is a package destination,” says Gibbons. “Tourism employs 325,000 people on the island. “We can’t afford to go back.”