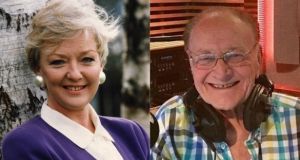 Well-known broadcasters Marian Finucane and Larry Gogan passed away within seven days of each other in early Janaury. Photographs: Matt Kavanagh/The Irish Times and RTÉ/PA Wire

On Tuesday morning, despite the sorrow of the previous days, the kids carried on playing, as kids do. While a doleful air hung over RTÉ Radio 1 in advance of the funeral of Marian Finucane – a phrase that still defies belief – an altogether livelier atmosphere prevailed over on congenitally upbeat sister station 2FM.

The first two hours of 2FM Breakfast with Doireann and Eoghan (weekdays) had been typically goofy and impish, giving no hint of the sadness enveloping Montrose.

A debate on whether children’s puppet Bosco was gender-neutral left Doireann Garrihy creased with laughter, while Eoghan McDermott slagged his co-host that enthusiasm for music was a rudimentary part of radio. But at 8am, when newsreader Emma Counihan informed listeners – and, apparently, the presenters – that Larry Gogan had died, the mood changed abruptly.

“We’re going to be totally honest, and say this is a big job for us to have to talk about this,” said Garrihy, uncharacteristically lost for words. McDermott sounded equally stunned, exhaling sharply as he spoke about Gogan: “Larry was the beating heart of 2FM for 40 years.”

It probably wasn’t the most appropriate metaphor in the circumstances, but in McDermott’s defence, he was upset. Alluding to the recent deaths of Finucane, Gay Byrne and 2FM colleague Alan McQuillan, he conceded it had been “weird couple of months” in Montrose. Playtime was over.

Well, almost. Gradually, shock gave way to sadness, fondness and even giddiness. A recent clip of Gogan mock-insulting Garrihy on the show brought forth affectionate laughter, not least at the notion of the famously friendly DJ ever being rude to anyone.

They also recalled his indefatigable work ethic. “He wasn’t massively mobile in his last couple of years, but nothing could deter him,” McDermott said. What could have been an insensitive comment seemed oddly appropriate in the setting, as 2FM’s young guns paid spontaneous tribute to the man who was their godfather.

The mood was more conventionally sombre on The Ryan Tubridy Show (RTÉ Radio 1, weekdays). “Strange days indeed,” said Tubridy, audibly blindsided. Alive to the poignant symbolism, he described Gogan, Finucane and Byrne as a “trinity of talent that dominated the airwaves”.

As well as sharing memories of Gogan as “gentle, genial and giving”, the host also remarked that he was good craic to have a pint with – the highest praise Tubridy can bestow on anyone, as regular listeners will know.

But the personal loss of Gogan’s death was laid bare when his old friend Ronan Collins spoke to Tubridy. The presenter of Radio 1’s midday music show was bereft, barely managing to utter the words “my pal” before breaking down. Tubridy, aware of his guest’s distress, offered to end the interview, but Collins continued.

“I need to be professional about this,” he said, as much to himself as to his host, one suspects. (Collins displayed his professionalism by presenting a heartfelt show in honour of his friend later that day.) With Tubridy providing a comforting shoulder, he spoke warmly about Gogan being “a mentor and a guide”, finishing on a plaintive note. “God, I’m going to miss him.”

Collins’s appearance encapsulated the emotionally wrought times in RTÉ. The death of Gogan had his colleagues palpably reeling, just as they were regaining some equilibrium following the hammer blow of Finucane’s unexpected death.

Over the weekend, when Finucane should have been hosting her shows, a melancholy but cathartic tone had reigned across the network. Aedín Gormley, host of the otherwise effervescent Movies and Musicals (Lyric, Saturday), spoke briefly but movingly about the “air of sadness” in Montrose’s Radio Centre, acknowledging the achievement of the woman “who led the way for so many of us”.

But it was on Saturday’s (RTÉ Radio 1) special edition of the show still bearing her name that the legacy of Marian Finucane was fully explored. Opening the programme, Rachael English sounded as much discombobulated as sad.

“It feels more than a little strange to be sitting in Marian’s chair this morning,” she said, with the faintest quiver in her voice. But, she added, it was also a privilege to be able to mark Finucane’s life and achievements, as well as the remarkable connection she had with her listeners, even when they weren’t on the same page.

“It’s for those of you who sometimes rolled their eyes and said ‘Ah, Marian’, but wouldn’t have had anybody else on their radio,” English said. As a summation of the late broadcaster’s charisma, it was hard to beat.

English’s guests recounted stories about Finucane, with particular attention given to how she gave a platform to women’s voices when starting out in the late 1970s.

“One of the most dominant features of Irish society was they weren’t heard, and if they were, they were disregarded,” recalled Finucane’s friend Patrick Farrelly, who worked with her in those early days. He also described the obstacles she faced in RTÉ’s “hierarchy”, “a phalanx of middle-aged men, many of whom were religious conservatives”.

The picture that emerged was of a private woman and immaculate professional with a keen instinct for what listeners wanted to hear, rather than what management thought they should. “I don’t think Marian was interested in RTÉ,” mused fellow broadcaster Aine Lawlor. “She was interested in her audience.”

After days of such bittersweet reminiscing about lately departed legends, Wednesday brought the hope of looking afresh to the future. Instead, it only brought depressingly familiar squabbling about the past, as the controversy about the now-deferred state commemoration of the RIC played out on Today with Sean O’Rourke (RTÉ Radio 1).

Listening to guests trying to outdo each other about which side had endured more violence a century ago was profoundly dispiriting. In comparison, the tributes paid to Finucane and Gogan were positively uplifting, and certainly more unifying.

Filling in as guest host on Monday’s edition of The Ryan Tubridy Show, Oliver Callan is a breezy, confident presence, sounding not unlike Gay Byrne at times. But he slips up in a way hard to imagine Tubridy or the late Byrne doing, when he says George Lazenby was the first actor to play James Bond.

Callan sounds surprised at the texts correcting him that Sean Connery was the original Bond. It’s an odd mistake for an impressionist like Callan to make, given how often Connery’s slurring Scottish drawl has been impersonated. Or to put it another way: Oliver, you’ve only your shelf to blame.

Don’t Be Evil: The Case Against Big Tech: Important book on corporate giants
5

‘We are the weirdoes, mister’: why women love witches
9