Seven of the best TV shows to watch this week

Anthony Hopkins is joined by a star-studded cast in the BBC's adaptation of William Shakespeare's King Lear. Video: BBC 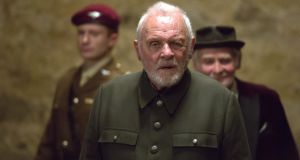 King Lear
Monday, BBC Two, 9.30pm
A mad king rules over a totalitarian military dictatorship in England, and pretty soon everything descends into chaos and doom. Is this a glimpse into the future for our hapless next-door-neighbours, recklessly charging headlong into Brexit and nationalism? No, it’s a new adaptation of Shakespeare’s most celebrated play, set in the present day, and any resemblance to current events are purely prescient. King Lear is one of those roles that every luvvie actor aspires to play, and this time it’s Anthony Hopkins who gets his chance. He is joined by Emma Thompson, Emily Watson and Florence Pugh as daughters Regan, Goneril and Cordelia, locked in a power struggle for their cut of daddy’s kingdom. Jim Broadbent stars as the PM Gloucester , with Andrew Scott as the PM’s good son Edgar. Expect some serious dystopian drama from a cast of seasoned veterans.

Peter Kay’s Car Share – The Finale
Monday, BBC One, 10pm
When Peter Kay’s series ended on a cliffhanger, fans were driven to distraction wondering if John and Kayleigh would take their blossoming romance up to the next gear. After all, put two people together in a small car, switch on Forever FM, and love is bound to start wafting into this confined space. After Kayleigh (Sian Gibson) declares her true feelings for John (Peter Kay), he makes no response, and Kayleigh gets out of the car and – possibly – out of John’s life for good. But fans don’t want to leave this grand love story hanging in the air, so they set up an online petition demanding a proper ending. Kay has obliged with this final episode.

Can’t Cope Won’t Cope
Monday, RTÉ Two, 10.15pm
The second series of Stefanie Preissner’s comedy is coming to a close, and Aisling is torn between two best friends. The new life she’s trying to build is also crumbling down around her, and it looks like she’s driven Ryan into the arms of another woman. There’s only one way to sort out this mess – another drunken night out in Coppers. The night ends with Aisling and Danielle locked out and locked. Can they find the key to get their friendship back on track?

Once More with Meaning
Wednesday, RTÉ One, 9.35pm
“I met Gay Byrne in 1961 at Granada. I started out admiring him and I ended up loving him. You couldn’t help it. I couldn’t have learnt from a better person.” This was what none other than Michael Parkinson said about Gaybo, who interviewed the broadcaster as part of his series The Meaning of Life. To celebrate his 60 years in the public eye, this programme brings highlights from the series, revisiting chats with Colin Farrell, Brenda Fricker, Charles Spencer, Imelda May Stephen Fry, Bob Geldof, Bono, Martin Sheen, Sinead O’Connor, Andrea Corr and Parky himself. Fricker reckoned Gaybo had his own brand of “sorcery” that gave interviewees the courage to go beyond their usual PR schtick, while Diana’s brother Charles Spencer remembers his interview as “an intense experience – there’s nowhere to hide.”

Bloom Live and Super Garden Final
Thursday, RTÉ One, from 5.30pm
It’s Bloom time once again, as the annual festival of all things garden-related returns to the Phoenix Park. You thought Ed Sheeran’s concerts were crowded? Try jostling your way through this ever-popular event with a bonsai in your hands. Aine Lawlor and Marty Morrissey bring you all the dirt from the opening day of the the festival, and somewhere along the way they’re hoping to fit in the finale of Super Garden, where one designer will find out if they’re going to Bloom.

Emma Murphy Fights Back
Thursday, RTÉ Two, 9.30pm
When Emma Murphy posted a video of herself online in 2015, with a black eye after being punched by her abusive partner, it was a small act of defiance against the culture of silence and shame around domestic violence. Within a few months the video had more than 10 million views, and Emma realised there were many more women out there who no longer wanted to remain silent. Made over two years, this film documents the 26-year-old’s efforts to increase awareness about domestic violence and encourage more people like herself to take the difficult first steps towards breaking the cycle of shame. It’s estimated that nearly 80 per cent of victims do not report their experiences, and that abuse runs through all ages, from teenagers on bad dates to middle-aged women in abusive marriages.

Tracey Breaks the News
Friday, BBC One, 9.30pm
Tracey Ullman is back for three new episodes of Tracey Breaks The News with her unique comic spin on the headlines, including her impressions of politicians and celebrities. Ullman will revisit her impressions of Jeremy Corbyn, Angela Merkel and Jerry Hall alongside Rupert Murdoch (Ben Miller); and brand new for this series is Michael Gove, and the hilarious new double act of Jacob Rees-Mogg (Liam Hourican) and his very long-suffering Nanny…