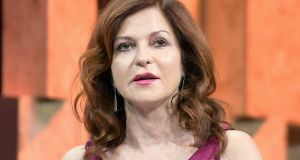 Writer Maureen Dowd: unpredictable enough to be both insightful and entertaining as a radio guest. Photograph: Getty Images

As the cervical screening scandal grows ever grimmer and the abortion referendum campaign reaches peak bitterness, hard-pressed current affairs presenters deserve whatever respite they can find. Sure enough, Sean O’Rourke treated himself last week by twice visiting the circus. True, the circus in question is the one in the White House, with Donald Trump as its ringmaster. But even as the presenter has conversations about America’s increasingly aggressive presidency on his programme (Today with Sean O’Rourke, RTÉ Radio 1, weekdays), the tone of sweet relief in his voice is unmistakable.

On Monday, O’Rourke greets New York Times columnist Maureen Dowd more like an old friend than a distinguished commentator, with the resulting discussion conducted in the same cheerful vein. This is partly because Dowd, who has covered Trump for 30 years, treats the US president as much as gossip column figure as politician, adding that most pundits “know nothing about him”. As if to prove her point, she recounts a conversation with Trump in the late 1990s about a possible presidential run, in which he cited his high ratings with TV talk show host Larry King as his credentials for the post.

Dowd clearly takes a dim view of Trump, but isn’t dogmatic in her views. She chides liberal Democrats for “overlooking large swathes of the country”. She is wary of Trump’s temperamental nature, but also sees him as “more of a cowardly lion, he thinks war is a waste of time when you could be doing business”. Lest one get too optimistic, however, she does note that “no one knows what’s going to happen with him”.

Dowd is unpredictable enough to be both insightful and entertaining. Meanwhile, O’Rourke sounds like he’s enjoying himself, despite the worrying subject matter. He sounds in similarly upbeat mood during Tuesday’s interview with American journalist Ronan Farrow, which again covers troubling developments in engaging fashion.

O’Rourke’s guest discusses his new book on the hollowing out of America’s foreign ministry, the state department. Lest listeners think this an arcane bureaucratic matter, Farrow compellingly suggests that this department’s decline since 9/11 has resulted in a preference for military solutions: perhaps inevitably, this trend which has accelerated under the Trump presidency.

But there is enough personal material to keep the conversation lively. Farrow, who worked in the state department, gives a drily witty account of having a conversation with the late US diplomat Richard Holbrooke while the latter showered: “I was on the other side of the door, I should add. This was not a ‘Me Too’ moment.”

In that vein, Farrow also talks briefly about the Pulitzer Prize for his reporting on Harvey Weinstein’s sexual misconduct allegations, but given ongoing revelations across the board, he says “it’s hard for this to feel like a victory lap”. If Farrow prefers to focus on the story rather than himself, it’s likely because of his own background: his estranged father Woody Allen has also faced abuse allegations.

O’Rourke doesn’t ask Farrow about his family other than to ask about his Irish roots, which is admirable but a bit disappointing, at least for those of a prurient bent. Still, the conversation shows O’Rourke at his best: informed and inquisitive yet relaxed as he gives his combative interrogative side a rest. Still, it’s a sad pass when such items provide light relief for listeners.

There’s little levity in Wild West (BBC Radio 4, Monday), the debut radio drama by Irish actor and writer Emmet Kirwan, nor indeed much narrative subtlety. But what the play lacks in lightness it makes up for in observation and performance. Set in the estates of Dublin’s eponymous “wild west” suburbs, Kirwan’s drama uses flashbacks to trace the story of bereaved mother Helen (Deirdre Donnelly), whose search for justice over her son’s murder leads her to a holding cell in a Garda station.

As Helen tries to discover who was responsible for her son’s death, she encounters weaselly young criminals, apathetic cops and cynical journalists as well as those people trying to lead decent lives, such as her fatalistic husband Peter (Owen Roe). By the time Helen meets menacingly charming gangster Brendan (Simon Delaney), Kirwan has sketched out a deft if jaded portrait of contemporary Dublin life.

To do this, however, Kirwan has to sacrifice plot twists: the denouement comes as no surprise. But the dialogue has an authentic crackle, while Donnelly and Delaney in particular deliver fine turns. The tale may not be especially original, but Kirwan’s fictional Dublin reflects society in the same vivid fashion as the late Tom Wolfe’s sprawling novels, albeit on a smaller scale: the campfire of the vanities, as it were.

Meanwhile, Drama On One: Kicking All the Boxes (RTÉ Radio 1, Sunday) kicks off a new season of homegrown radio plays in exhilarating fashion, taking a decidedly non-linear approach in the process. Written and performed by Liz Fitzgibbon, the play follows kickboxing single mother Naoise as her life takes parallel but different paths up to her 30th birthday, by which time she is either a professional dog-walker or homeless addict, depending on the route taken.

If the structure is occasionally confusing, Fitzgibbon displays a talent for the evocative vignette, from socially awkward encounters and one-off trysts to random acts of violence. It sounds great too: originally a stage play, Gorretti Slavin’s adaptation for radio use atmospheric audio backdrops to add to the unsettling effects.

The result is an imaginative and disorienting vision of a woman’s narrowed opportunities in Ireland. Like her fellow dramatist Kirwan, Fitzgibbon doesn’t paint a pretty picture. But unlike much of what is heard in the news at the moment, it does ring true.

Leinster’s triumph in the European Rugby Champions Cup may have delighted the province’s supporters, but it is surely as nothing to the joy of commentator Michael Corcoran as he marks the victory in his own inimitable style on Saturday Sport (RTÉ Radio 1). When the final whistle sounds after a nail-biting finish, the terminally passionate Corcoran is unabashed in his emotions. “Leinster can celebrate, the place has absolutely erupted,” Corcoran bellows breathlessly, almost losing his voice. “The Frenchies have been beaten, Leinster are the champions of Europe.” Fans of great radio are the real winners.