Be warned: you might not be able to escape Harry and Meghan’s wedding on Saturday 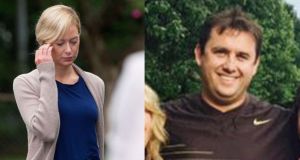 Molly Martens Corbett was convicted of the second-degree murder of her husband, Limerick man Jason Corbett.

RTÉ One, Friday, 9.35pm
The family of murdered Limerick man Jason Corbett will appear on the show on Friday night. Corbett’s wife Molly Martens, and her father, Thomas, were jailed in August for his murder. The interview will be their first major Irish TV appearance since the trial and Tracey Corbett-Lynch, along with siblings Wayne and Marilyn Corbett will discuss the events that lead to their brother’s death, the trauma of the subsequent trial for the family. Also on the show are participants of the documentary My Trans Life talking about the struggles they have encountered since coming out as transgender; Majella O’Donnell on the new series of B&B Road Trip; The Hairy Bikers; former Leinster player Ian McKinley, along with Irish brides who will compete to prove who knows Meghan Markle and Price Harry the best.

The Graham Norton Show
BBC One, Friday, 11.05pm
This week’s guests are the Game of Thrones star Emilia Clarke, whose latest role is in Solo: A Star Wars Story, the singer Gloria Estefan, whose life and music have been turned into the Broadway musical On Your Feet!, the Broadchurch and former Doctor Who star David Tennant, the actor Miriam Margolyes, and Leon Bridges, who’ll be performing his new single, Beyond.

The Royal Wedding
RTÉ One, Saturday, 11.30am
The world’s cameras will be trained on one happy couple on Saturday morning: a bloke named Harry and his American bride, Meghan. RTÉ will be joining the world’s media at St George’s Chapel in Windsor Castle to witness these two crazy kids tying the knot. Maura Derrane, Evelyn O’Rourke and Darren Kennedy will keep us up to speed on the celebrity guests and fabulous fashions. If you can’t wait until 11.30am, coverage starts at 9am on BBC One and Sky One (and at 9.25am on UTV). And you can’t escape the nuptials by turning over to 3, as it’s on there, too, from noon.

Titanic: The New Evidence
Channel 4, Saturday, 8pm
Another chance to see Senan Molony’s investigation of why White Star Line’s Belfast-built ship sank on its maiden voyage. The Irish journalist argues that more weight should be given to a coal fire that he says damaged the hull before the liner set off on its only voyage. Other Titanic experts have disagreed with his thesis since the documentary’s first broadcast, last year.

All Round to Mrs Brown’s
RTÉ One and BBC One, Saturday, 9.20pm

All Round to Mrs Brown’s, the Mrs Brown’s Boys spin-off, is back, and once again the bawdy Agnes Brown, aka Brendan O’Carroll, sets out to sabotage her daughter’s burgeoning chatshow career. This week’s guests include the EastEnders hard man Danny Dyer and the boxer Amir Khan, both of whom will be putty in Mrs Brown’s gnarly hands. There’ll also be music from one of Michael Jackson’s brothers, cooking from Chef Aly, and the return of the Mammy of the Week award.

The Ray D’Arcy Show
RTÉ One, Saturday, 10.30pm
This weekend’s show wouldn’t be complete without a slice of the royal wedding action and just hours after Megan Markle and Prince Harry say “I do”, Ireland’s first replica of Markle’s wedding dress will be on show with Brendan Courtney and Sonya Lennon discussing the event’s highlights.
Also on the show: Donncha O’Callaghan will discuss his retirement decision; Dubliner John Sheahan will be joined by a host of other musicians to celebrate his 79th birthday; Blue Teapot theatre company will discuss their upcoming production of Dancing at Lughnasa, while the men behind the €45,000 house pods will talk about how their idea is helping solve the housing crisis.

At Your Service
RTÉ One, Sunday, 8.30pm
A couple of years ago Jonathan Keogh bought the Hideout, a bar in Kilcullen, Co Kildare, where he and his best friend, Martin Lambe, spent many evenings as young men. But they’ve no experience of running a pub – which is where Francis and John Brennan come in. The hoteliers help the pair revamp it, adding a cafe and restaurant.

A Very English Scandal
BBC One, Sunday, 9pm
In the late 1960s the leader of the British Liberal Party, Jeremy Thorpe, was a politician with a brilliant career and a bright future. But he had a dark secret, and he went to extraordinary lengths to prevent it from coming out. At a time when homosexuality was still illegal, Thorpe had an affair with a young stablehand, Norman Scott. With his political star on the rise, Thorpe knew it would be the end of his career if the liaison were made public, so he set out to silence his ex-lover for good. This three-part drama tells the shocking story of corruption, deceit and conspiracy to commit murder. Hugh Grant stars as Thorpe, with Ben Whishaw as Scott. The story is written by the Bafta winner Russell T Davies and directed by Stephen Frears, so with all those starry names on the bill we’re expecting some seriously good telly.

The Great House Revival
RTÉ One, Sunday, 9.30pm
This week the architect and Home of the Year judge Hugh Wallace follows Ronan Fitzpatrick and his fiancee, Mary Rahill, as they try to turn the derelict 19th-century building where Fitzpatrick went to school, in Cavan, into their family home – at the same time as planning their wedding. No pressure, then.