Four of the best shows to watch on TV this week

The Manchester Arena bombing revisited one year on, and stressed out Ireland 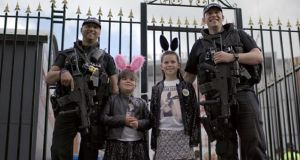 Manchester: The Night of the Bomb
BBC Two, Tuesday, 9pm
On the first anniversary of the Manchester Arena bombing, this documentary brings us back to the terrible night of May 22nd, 2017, when 22 people were killed in a terrorist attack as they left an Ariana Grande concert. The programme uses eyewitness testimony and unseen mobile-phone footage to chart the events of that night, and meets some of the young survivors of the attack. It will also shed some light on the motives of the attacker, 22-year-old Salman Abedi, who grew up near many of his victims.

Stressed
RTÉ One, Wednesday and Thursday, 9.35pm
Feeling stressed out? Under pressure? Can’t cope, won’t cope? Then sit back, relax and watch this two-part series presented by the Irish Times columnist Jennifer O’Connell, who looks at the science of stress and what goes on in our bodies when our minds are troubled by the demands of everyday life. A group of volunteers will have their stress levels measured, and experts come up with a range of suggestions to counteract the negative effects of stress. Among the volunteers are Ger Renton, a Galway woman who faces the challenge of looking after a son with Hunter syndrome; John Farrell, a grandfather and mature student; Steffi Skeehan, a teacher who dreams of a good night’s sleep; and Conor Higgins, a chef.

Humans
Channel 4, Thursday, 9pm
Laura becomes probably the last person to figure out that the Dryden Commission has been less than honest with her. Meanwhile, as a grieving Max faces up to his painful decision, Joe discovers the shocking truth Karen has been hiding.