Watching this nervy RTÉ documentary, my blood pressure spiked before the ad break

Journalist Jennifer O'Connell puts the fight or flight response to the test during a simulated combat situation as part of the RTÉ documentary "Stressed". Video: RTÉ 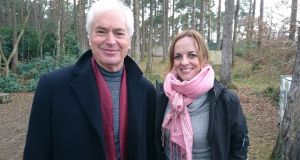 At a certain point in the first part of her two-part documentary on stress, Irish Times columnist Jennifer O’Connell meets a man in gloves in the middle of a forest who arranges for her to be pursued by men with guns.

You can’t help but feel that O’Connell is making things difficult for herself, but she comes through the ordeal relatively unscathed and entirely unshot.

“I made it,” she tells her tormentor, the amiable neuroscientist Prof Ian Robertson, although the point of the exercise is to magnify a myriad other quotidian pressures, the deadlines, tensions and children’s bedtimes that stalk us unrelentingly and mean that “even though our life isn’t actually in danger, our body keeps behaving as if it actually is”.

As both presenter of and participant in this study of the nation’s stressors, O’Connell is almost always on the move, talking to the camera while striding through university campuses to enlist scientific analysis and advice, ploughing between the demands of a young family and the duties of a self-employed communications consultant, and scrolling through data yielded by a purpose-built app called How Are You Ireland?

Today’s stresses tend to be nudged along by alarm clocks, smartphones, and the ceaseless pressures of work, debt and status. How do you deal with a fight or flight instinct when you’re stuck in rush-hour traffic?

O’Connell and her director, Tom Johnson, tend to throw data at the problem, outlining the thumb-twitching phenomenon of “technostress” even as the documentary seems to embody it.

The programme sees five volunteers submit saliva samples that yield jagged graphs of the stress hormone cortisol. They are also hooked up to heart monitors and stalked by cameras they heroically ignore. My blood pressure spiked before the ad break.

Sometimes the advice of innumerable experts comes as a relief, as when Steffi, a teacher who has not been sleeping, is told by a sleep therapist with a digital display that she is suffering from insomnia.

“I’m shocked,” she says sincerely, still more alarmed at the extremity of the therapy. “I can only read a book,” she says. “Horrifying.”

Often, though, the data feels defensive, as though the programme worries we are not convinced by clenched teeth, sleepless nights and sweaty palms alone.

The long-term consequences of chronic stress, O’Connell argues persuasively, include deteriorating health, strained relationships and, as psychologist Deirdre O’Shea explains, burnout: “When you start to get cynical about what you’re doing, feel completely drained, and feel that everybody else is just a problem.”

O’Connell ends with a nervy cliff-hanger: that future generations may never know relaxation, as they dodge cyberbullies, deal with crippling FOMO and flee the gun-toting henchmen of evil neuroscientists who hunt them for sport.

Thursday’s second part suggests the antidotes, and, at the risk of overstatement, if you miss it you’re doomed.