The royal wedding: literally everything you need to know

Where to watch it, who to watch out for, the potential flashpoints and the after-party 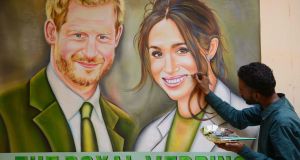 Yes, yes, we know you knew that – but did you know who’s walking Meghan down the aisle? Or what’s on their wedding list, or that their cake will be an elderflower installation? Or that renegade Markles are currently arriving by their droves into the UK, without so much as an invitation between them? We thought not.

The ceremony begins at midday at St George’s Chapel in the grounds of Windsor Castle. The 600 guests will start arriving at 9.30am – a “relatively modest” number if you practically own Britain apparently, and “just the first of many signs” that this will be a less grand affair than big brother Prince William and Kate Middleton’s.

They had 1,900 at theirs, and allegedly didn’t even get to talk to half of them. Prince Harry and best man William are expected to show up around 11.45am, while Meghan Markle is slated to arrive at 11.59am. Americans are very punctual.

Afterwards, at about 1pm, the ginger hipster prince and his American bride will undertake a carriage procession from St George’s Chapel through Windsor town, returning to Windsor Castle along the Long Walk, a procession that’s expected to take 25 minutes.

The reception hosted by the Queen is at St George’s Hall, and later that evening Prince Charles will throw a private family celebration.

Yes, that may be every bit as much a yawnfest as it sounds. But this is Harry we’re talking about, so the festivities won’t end with a quiet cup of Bovril at Charles and Camilla’s. A group of 200 close acquaintances have been invited to an after-party at Frogmore House. Cameras and phones are banned, so don’t hold your breath for photos of Harry and Meghan flossing on the dancefloor.

Where can we watch it?

A better question – especially for the half of you who claim (yeah, right) in surveys to have no interest – might be where can’t you watch it? RTÉ One will have coverage the event from 11.30am to 1.30pm, with commentary by Maura Derrane, Evelyn O’Rourke and Darren Kennedy. TV3will have coverage from the UK presented by Julie Etchingham and Phillip Schofield. The live stream from ITV will run from 9.25am to 3pm from a special studio in front of Windsor Castle, while BBC will have full coverage of the event from 9am to 2pm, with Dermot O’Leary stationed on Windsor Castle’s moat, ready to present Meghan with a video of her “best bits”. Sorry, different show.

Sky News is screening the proceedings in “ultra high definition”. And of course the Irish Times will have coverage from Windsor throughout the day.

What should we look out for?

The big question is who – if anyone – will walk Meghan down the aisle, now that her father Thomas Markle, has been kicked off the invite list, in royal parlance, having “decided not to attend”. The official explanation is that he is having health problems, after he suffered a heart attack a week ago. The actual reason may be that he pretended he wasn’t looking when some paparazzi took his picture, invoking ghosts of Fergies past. He told US website TMZ he was “okay”, although his (broken) heart will take a “long time to heal”.

Markle was unmoved. “Sadly, my father will not be attending our wedding,” she said, adding that she had “always cared” for him and hoped he could be given the space he needed to focus on his wellbeing, which is royal parlance for give it five years, and he may be invited back into the fold. Look at Camilla, Tom, look at Camilla.

Up until Friday morning the most likely stand-in was thought to be her mother, a yoga teacher called Doria Ragland. It was also speculated that Meghan might make make a solo dash down the aisle, with just her phalanx of pageboys and flower girls for company.

However, it has now been confirmed that Charles himself will walk his daughter-in-law to be down the aisle.

“Meghan Markle has asked His Royal Highness the Prince of Wales to accompany her down the aisle of the Quire of St George’s Chapel on her wedding day,” Harry’s office at Kensington Palace said in a statement. “The Prince of Wales is pleased to be able to welcome Ms Markle to the royal family in this way.”

With that problem solved, the very latest speculation suggests that Other questions are now filling urgent column inches and Google searches: the ‘tiara debate’; will Meghan cry?; will Harry cry?, and will anyone get a selfie at Frogmore House?

What do we know about the dress?

Very little, but royal watchers are expecting something “brave and bold” -  meaning lots of ruffles, mad embroidery or sculptural bits. She has previously said she loved Carolyn Bessette Kennedy’s slinky slip wedding style, calling it her “everything goals”, but there’s no way she’ll get away with that kind of simplicity now she’s a royal.

With room for an intimate gathering of 800, it’s considered a more low key venue than the 2,000 seater Westminster Abbey. And it’s also more private.

Any guests of interest?

Harry and Meghan have taken the bold step of inviting what the British press doesn’t remotely patronisingly called “ordinary members of the public” to the wedding and Queen’s do. These include schoolgirl Daniella Timperley and injured soldier Philip Gillespie, both from Ballymena, Co Antrim. Otherwise, it’s the usual shower – Sir Elton John, Ed Sheeran, Cara Delevingne, David and Victoria Beckham, and Serena Williams.

Does Britain get a day off to celebrate?

Not this time. The public was given a day off to celebrate Charles and Diana’s wedding, but look how that turned out. They also got days off for Prince William and Kate Middleton’s wedding, and even for the marriage of Princess Anne to Mark Phillips in 1973. The lack of a day off this time is not punishment for Brexit or for the paparazzi initially being sniffy about Markle – it’s apparently simply practical, since Harry and Meghan are getting married on a Saturday, in a flouting of the tradition that dictates royal weddings take place on weekdays.

Pub opening hours may be extended to 1am allowing the public more opportunity to celebrate in the time-honoured fashion by eating kebabs at 2am and subsequently vomiting into gutters to the strains of God Save the Queen while wearing a ginger wig and a union jack muscle top.

The likelihood of Markle family shenanigans is rumbling along nicely. With Thomas Markle out of the picture, that’s at least one tricky relative taken care of. But don’t worry – Meghan has several more waiting in the wings. Under the headline “Wedding Crashers”, the Sun reported this week that her nephews and sister-in-law have arrived in London from Oregon in the company of 13 suitcases, without a wedding invite between them.

Unfortunately, the most plausible explanation is that Tracy Dooley, and her two sons Tyler and Thomas, and their 13 suitcases, have landed a gig reporting on the nuptials for Good Morning Britain from Windsor on Saturday. Meanwhile, back in the US, half-sister Samantha Markle, was reportedly injured following a “paparazzi confrontation” in Florida. And the royal family thought they had problems with Kate Middleton’s renegade cousins.

This is Harry and Meghan we’re talking about. Not for them grabby requests for Nutribullets and beard trimmers. Instead, they’ve asked for donations to be made to some of their favourite charities including Surfers Against Sewage. Nope, this is not the Onion.

Oh, and they’ll be getting York “cottage” on the Sandringham estate from Granny, so that’s nice.

Other than fathers being disinvited for misbehaviour, watch out for “lemon elderflower bake” wedding cakes, presented in a “special and non-traditional way”, and foraged flower arrangements involving branches of beech, birch and hornbeam, and white garden roses, peonies and foxgloves. Also, Markle is not having any adult bridesmaids, in favour of lots and lots of shiny faced small people with untroubled relationships with the press. We’re told she will have five friends and her mum there for her special day though.

More when we have it. You’ve been warned.