Disenchantment: Matt Groening reveals what new show will look like

Simpsons creator’s ‘adult fantasy’, his first new show in 20 years, will air on Netflix this summer 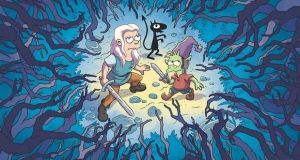 Matt Groening’s Disenchantment will features Bean, who is no ordinary princess. Photograph: Netflix

Last summer, Matt Groening, the creator of The Simpsons and Futurama, announced that Netflix had bought the rights to his first new show in nearly two decades: Disenchantment, described as “an adult fantasy about a crumbling medieval kingdom known as Dreamland”. Now, there’s a premiere date and a first look at the series, which follows a boozy princess named Bean, her aptly named elf friend Elfo, and Luci, Bean’s “personal demon”.

The 10-episode first season of Disenchantment, which marks Groening’s long-awaited return to television, lands on Netflix on 17 August. Broad City’s Abbi Jacobson will voice Bean, who, in the four promotional photos released by Groening on Reddit and the show’s official Twitter account, carries either a sword, scimitar or a pint of beer, suggesting no ordinary princess.

“In Disenchantment, viewers will be whisked away to the crumbling medieval kingdom of Dreamland, where they will follow the misadventures of hard-drinking young princess Bean, her feisty elf companion Elfo and her personal demon Luci,” reads the official summary for Disenchantment. “Along the way, the oddball trio will encounter ogres, sprites, harpies, imps, trolls, walruses and lots of human fools.”

In a statement last summer, Groening described Disenchantment, which has been picked up for 20 episodes, as a show “about life and death, love and sex, and how to keep laughing in a world full of suffering and idiots, despite what the elders and wizards and other jerks tell you”.

In April, Groening made history when The Simpsons aired its 636th episode, surpassing Gunsmoke to become the longest-running scripted primetime series. The show premieres its 30th season this fall amid a debate about the character of Apu Nahasapeemapetilon, the Indian store clerk who was the subject of comedian Hari Kondabalu’s 2017 documentary about The Simpsons and South Asian stereotypes, The Problem with Apu.

Asked about the criticism last month, Groening replied tersely. “I’m proud of what we do on the show,” he told USA Today. “And I think it’s a time in our culture where people love to pretend they’re offended.”

Disnechantment will be co-executive-produced by Bill Oakley and Josh Weinstein, Groening’s frequent Simpsons collaborators (and the co-writers behind the classic Simpsons episode Marge Gets a Job). In Groening’s characteristically tight-lipped fashion, the teasers for the show tell us little. But since Disenchantment will be available on Netflix, in Groening’s first production away from Fox, the inevitable late-summer binge watch should make up for the show’s carefully cultivated mystique. – Guardian Service