How did intelligent Irish women get through the day in the 1980s?

'One Day at a Time' and 'Roseanne' are on their way back; here are some olden-days shows that should also be remade, like "womanning competition" Calor Kosangas Housewife of the Year 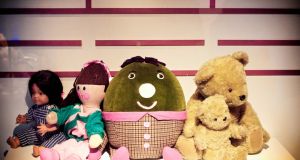 Looking ahead at the telly schedules for 2018, I see many, many reboots and sequels. This can be a good thing, Netflix’s remake of Norman Lear’s One Day at a Time is warm, uplifting and funny and I have high hopes for Roseanne. Also, new things scare me and they clearly scare television production companies. So here are some television properties from the olden days that should be remade or rebooted.

The Calor Kosangas Housewife of the Year
This popular womanning competition was sponsored by a gas company because solvent abuse was the only way most intelligent Irish women could get through the day in the 1980s. Over the course of this programme, women with the wits to run CERN or perform brain surgery instead demonstrated how to bake a casserole while being patronised by a man in a nice suit. My proposed remake would be just called The Patriarchy and would be hosted by Panti Bliss and Edvard Munch’s painting The Scream.

Tales of the Riverbank
Originally an adaptation of James Herbert’s The Rats, Tales of the Riverbank featured real cuddly animal actors engaged in entertaining activities such as paddling a riverboat with a mole, taking tea with a wise old frog or piloting a plane alongside a cheeky field mouse. As wildlife documentaries go, it was very entertaining. For my reboot, I would retain the essential concepts but would add the odd anti-heroic touch, like having Roderick the Water Rat spread plague or Hammy the Hamster cannibalise his siblings or slow-coach sidekick Turtle not so much “teaching his friends patience” as “frustrating his friends by being very difficult to devour”. HBO will snap it up.

Stig of the Dump
A young boy befriends an anachronistic caveman, or, possibly, just an ugly, weird man who lives in the dump. Which is it? The reboot, disturbingly, will leave that question to the viewer.

Worzel Gummidge P.I.
Worzel Gummidge (Jon Pertwee) was an elderly turnip-noggined gent who worked as a scarecrow and could change his head when required (much like Jon Pertwee’s other famous role, Doctor Who). His best friends were baffled and neglected schoolchildren John and Susan, and he regularly said upsetting things like “I’ll be bum-swizzled”. The reboot will see him move to the city and the letters “PI” added to the title. I will, on reflection, also add “PI”. to the title of Stig of the Dump, just to give him a more wholesome reason to be hanging around a dump.

Weekend at Bernie’s
Two young ragamuffins go to spend a weekend at their rich boss’s seaside mansion only to find him deceased. They do what anyone would do in the circumstances: they animate him using various ropes and pulleys, fool a woman into having sex with his corpse and proceed to have the most magical weekend of their lives. What joyful scamps. For my HBO TV reboot, I will spread the action over several seasons and explore, more deeply, what it means to live and party with a decomposing body.

The John Player Tops
This cigarette-company-sponsored variety competition was ahead of its time. It featured the employees of various companies dancing, singing and japing in return for job security and/or love. Who can forget Waterford Glass versus Packard Electric? We sing songs about it still, where I’m from. Nowadays, in a de-unionised world of mobile, tax-efficient multinationals, the frenetic hoofing will be even more desperate and the corporate box will surely look like something from the Capitol in The Hunger Games. It would be inappropriate, nowadays, to have the show sponsored by a cigarette company, so we would make do with an anti-anxiety drug or methadone manufacturer. Apple will only be allowed enter if they give us the €13 billion they owe us (there’s an incentive, lads).

The Spike
This was a gritty secondary school-set drama that aired on RTÉ in the 1970s but was cancelled after an art room scene featuring a naked life drawing model upset the whole country (then under the cosh of an autocratic blood cult brought over here by a deranged Welshman). The Spike was, by all accounts, terrible. But it might be nice if we rebooted just the art room scene and used it to replace the Angelus, just as a reminder of how far we’ve come.

The Eurovision When We Used to Win it
Wasn’t it great when we used to win the Eurovision Song Contest? Didn’t that feel good? Well, rather than pin all our hopes on some reedy-voiced tyke who has won a singing competition or completed his national service in a boyband, let’s go all North Korean on the Eurovision and fake it. Yes, that’s what I said: fake it. Why not? The licence payers won’t notice, they haven’t even read this far down the page. A big “live” shindig where performers from all over “Europe”, all played by Glen Hansard wearing different wigs, are bested by Johnny Logan or Dana, would surely be cheaper than sending a team to Gdansk. And it would also serve as a nice propagandistic precursor to Irexit.

The Riordans
The Riordans was an ancient Irish soap opera that was also used to propagate new farm technology to a simple, agrarian people. My reboot would be set in Dublin’s tech quarter and would follow several generations of a family of social media consultants as they sing folk songs about search-engine optimisation and have tea with the priest.

“I believe they’re hiring vloggers up at the big internet factory,” he’ll say.

“No son of mine will vlog for the yanks!” Pa Riordan will tweet, banging his hand on the table and shaking the froth off his Frappuccino.

Play School
We should aim the new version of this infant BBC romp at grown-ups. We’re all a bit stressed these days. I mean, who wouldn’t want to have a kind lady read stories to us, take us to visit a bottle factory via a magic window and guide us in growing from an acorn to an oak, like Adrian Mole’s dad? Adults have colonised all other aspects of youth culture – pop music/festivals/public tantrums – so why not Play School?

And while I’m at it, I’d also like to see Bosco getting a political interview show (he’d certainly be more aggressive than Piers Morgan). Also, I want all people with Blue Peter badges recognised as members of a paramilitary organisation and arrested.

The News
Remember the television news? Remember a time before the day’s events were vomited endlessly from the vibrating mobile hate screens to which our nervous systems are wired? Remember when new information did not come alongside the hysterical ravings of a thousand unhappy strangers? Remember when nice older gentlemen with unearned confidence, confirmed in firm, dispassionate voices that the government had the situation in hand?

Wouldn’t you like to just watch the news, on television, at set times of the day, instead of falling to your knees under the weight of your iPhone, gibbering and wailing like a loon?

Well, that was my big idea: “Let’s do news on the television again”. However, according to some know-it-alls here at The Irish Times, television never stopped doing news. Well, la-di-da, look at them with their big news-capable brains. I bet they even read newspapers. They think they’re so great.