Review: The first episode of a new series is limited by cliche and predictable politics 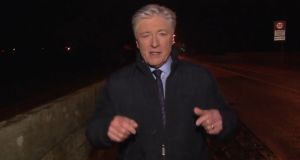 Pat Kenny looks haunted by the prospect of a hard border

“Seamless, frictionless and open.” As he crosses it by foot at night, Pat Kenny describes the Border between Northern Ireland and the Republic as though it was almost as suave as himself.

For the return of The Pat Kenny Show (TV3, Wednesday, 10pm), his current affairs broadcast has trekked to Blacklion in Co Cavan, a stone’s throw from Belcoo in Fermanagh, to discuss the threat of a hard border and the challenges facing rural Ireland, with a panel of politicians and political commentators.

To make the indigestible prospect of a hard border more palatable, the programme kicks off in the kitchen of Neven Maguire’s McNean House restaurant. Maguire employs the same reassuring tones he uses to guide you through a casserole recipe, while also managing to plug his business (“We’re a destination restaurant”) and career (“I was lucky to get a break in television and the rest is history”) and, at Pat’s insistence, to consider “Doomsday”.

Maguire treads gently as he considers the potential atrophy of business and hike in tariffs a hard Brexit might bring. Pat looks genuinely haunted. In a stately reception room, better laid out for genteel parlour games than political debate, a panel takes questions about rural affairs as though playing a round of pass the cliché.

“It’s not a hand-out we need, it’s a hand up,” says bullish Independent TD Michael Fitzmaurice.

“No, this isn’t about asking government for hand-outs, as has already been said,” notes assured Sinn Fein MEP, Matt Carthy.

The general argument is that rural Ireland has suffered unfairly from years of underinvestment and inadequate infrastructure, and, useful as it is, the exhausted slogan seem like an example.

Salient points are discussed at speed. Some, like Mulherin’s confused timeline for Fine Gael’s National Planning strategy over “the next two score years . . . twenty score years”, suggest the problem will be kicked down to our distant descendants, which actually seems quite likely.

Otherwise the automatic political impulse to seek favour and refuse blame exposes the tight seams of this debate, its predictable friction, its closed nature; a discussion with hard borders.

“The vacuum of political thinking is replaced by mood,” suggests pundit Joe Brolly, sitting casually with Pat on top of an outdoor picnic table. And while Brolly is unfazed by the threat of the return of a hard border (“Already it’s been made clear that that’s not going to happen.”) the show still entertains that fear: a mood of doom easily fills the vacuum of uncertainty.

The programme offers one final tonic with the appearance of frictionless cross-border singing sensation Brian Kennedy, who, to his credit, wants none of it. He performs Christopher Street, a song about New York, which seems like the show’s most trenchant comment.

Let’s get as far away from all this as possible.