Review: The drama’s mafiosi rarely get a flash of personality – too busy killing or being killed 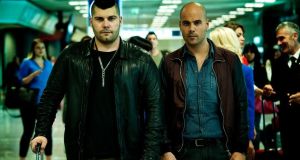 Genarro (left, played by Salvatore Esposito) has the gait of a rhinoceros and the hair of a premiership footballer, with his one-time associate Ciro (Marco D’Amore)

One moment guaranteed to raise a smile in Gomorrah (Sky Atlantic, Wednesday, 9pm and 10pm) – a show that is otherwise inclined to leave them buried – comes during its end credits. There the programme gratefully acknowledges the assistance of the Napoli tourist board.

If you’ve watched this brooding mafia drama, concentrated on the Secondigliano neighbourhoods where the Camorra clans of organised crime operate, you know what the tourist board must be thinking. What has Gomorrah done for us lately?

Based on the book by Roberto Saviano, which has since inspired a play, a film and the author’s full-time police protection, Gomorrah now enters its third series where the cast list is subject to brutal revision.

When we last left it, the ruthless head of the family had just met his grisly end at the foot of his own tomb, like a runner who collapses before the finish line. This is also where the show picks up, letting the camera hovering above the Savastano grave, observing Don Pietro’s body with sepulchral reverence.

Life is cheap in Gomorrah, though; his next destination is a meat locker.

The opening episode is taken up mostly with the assassination’s aftermath and violent reprisal. His son, Genarro (Salvatore Esposito), a man with the gait of a rhinoceros and the hair stylings of a premiership footballer, blames Ciro (Marco D’Amore), his one-time associate and now mortal enemy.

But the divisions within this Secondigliano crime family are far more potent. “You know what they say, Malammore?” Genny chides his father’s No 2. “The viceroy becomes the king’s worst enemy.”

Malammore, a grave Fabio De Caro, who knows he should have done the honourable thing and died alongside his leader, responds: “They also say the only one not weeping at the king’s funeral is his son.” Menacing aphorisms seem to be the weapon of choice.

Otherwise the show is leadenly short on wit, a reflection more on the characters than the makers. Unlike The Sopranos, The Wire or even Love/Hate – shows with glancing similarities – Gomorrah’s mafiosi rarely get a flash of personality, too busy killing to ever just kill time.

(This series, like the last one, flashes forward by a year, as though nervous of ever slowing down.)

If the series comes close to an arch comment, it is the sublimely tacky display of criminal wealth. Don Pietro’s coffin is gaudier than a Renaissance Pope’s and in a gold-plated home that King Midas might find excessive, even the security monitors sit inside gilt frame.

Genny, a new father himself, and now in charge of the family business, seems to have a sliver of self-insight: “My father wasn’t murdered. What killed him was the poison we all carry inside.”

This is poetic, certainly, but not entirely true: he was actually killed by Genny, Ciro and a bullet to the head.

You watch Gomorrah for its unswerving grittiness, the anti-tourism of its racked and broken city seen in dark green hues. But if its plentifully assigned deaths don’t carry much weight, it is because the show never allows its characters any time to live.