Ireland's Got Talent: Everything you need to know 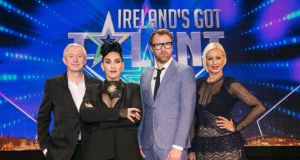 There’s a big difference between singing at home and in front of a studio audience, as Escobar from Blanchardstown learns at the Ireland’s Got Talent auditions. Stage fright got the better of him the day before and this is his second chance. He hops from foot to foot and cocks his head nervously. His feathers are visibly ruffled and lights, camera … nothing.

Escobar is a parrot. A yellow, green and pink parrot that sings The Fields of Athenry beautifully at house parties, according to his owner, Kevin, but judges Jason Byrne, Denise van Outen, Michelle Visage and Louis Walsh point out that if he can’t handle the pressure to perform now, when can he? They concede that the spotlight isn’t the place for a parrot with stage fright and they gently let him go.

It’s the final day of auditions in The TLT in Drogheda, Co Louth, for the first series of Ireland’s Got Talent, the Irish version of the popular show that’s broadcast in 58 different countries, and while the crew seem weary, there’s a hyper energy backstage. With no age restrictions to apply to the show, the theatre is overrun with singers, dancers – lots of dancers – and magicians who got half days off school to audition.

Some of the older kids make up Suimhneas, a 30-piece choir and band, from Wicklow’s Coláiste Chill Mhantain. Still in their school uniforms, they perform Your Love Still Goes My Way, a moving song they wrote for any family members who are sick. “You’re like School of Rock but with deeper meaning,” says a teary-eyed Visage. The majority of the children, though, are dancers clad in spangly costumes and fixed with permanent smiles. The Minis, a dance group from Firhouse’s Steptacular Performing Arts School, stun the crowd with their frantic jazz routine to Tina Turner’s Proud Mary, equipped with the trademark Tina Turner shimmy. Their commitment to sparkle motion is undeniable.

Dancing is big business in Ireland, I’m told by an important-looking man wearing a headset, but one group is bringing something different, he says, before introducing me to Pro 7+. At first glance, these dancers look like your average dance troupe (I know all about dance troupes now, you see) until I look at their feet. Wearing what they call rebound shoes – envision a snow boot with a kangaroo bounce or a futuristic pogo boot – they’re hopeful to make it to the live shows with their Irish dancing, which comes with a special jumping technique.

“These boots connect people!” says choreographer, dancer and bouncing boot distributor Jekaterina, who speaks on behalf of her team, made up of Irish, Polish, Latvian, Russian, Lithuanian, Moldovan and Ukrainian women.

Unlike The X Factor, where winners sign away a few years of their life with an immediate recording contract, the winners here get a €50,000 cash prize and an hour-long Christmas television special. With no contract and no fame clause, Ireland’s Got Talent is a glitzier version of what happens in school halls and GAA clubs across the country, except Louis Walsh is involved. There’s no forced nastiness and any criticism from the judges is constructive.

Producer Darren Smith says Visage, an American singer, TV host and judge from RuPaul’s Drag Race, brings great empathy to the show, and it’s rubbing off on the other judges. She is no stranger to Ireland, having been Dusty Rhodes’s Hollywood reporter on 2FM in the early 2000s. Her firsts trips to Ireland were glamorously sponsored by Cidona.

Visage is known for her straightforward judging style on Drag Race, and she’s tweaking her critiques for this new and younger audience. “Like I’m never going to talk to a child the same way I would to a drag queen who’s been out there in the real world, because for a drag queen like that, I’m not going to sugar-coat anything,” she purrs on her break from hair and make-up in The D Hotel. “But for a seven-year-old kid who is just starting out and trying to be the best that they can be … I’m not gonna go balls to the wall in on a little seven-year-old.”

Before signing up for Ireland’s Got Talent, Visage knew she would be wowed. “I watch Britain’s Got Talent and so many people from Ireland are on, because that’s the closest, and so many people from Ireland wow the judges every time. So I didn’t come questioning that there’d be any talent. I didn’t ever once have to say ‘Hmmm … let’s see what’s going to happen’,” she says, adding that she’s also commissioned pieces from Irish fashion designers for the live shows. “I knew that there was going to be talent. I knew it. Because I’ve seen it. I know how talented Ireland is.”

When it comes to spotting star potential, Visage likes to give acts some time to get into the groove. “It’s not easy if you haven’t done it a lot,” she says. “So I like to give them a little bit, you know – 30 seconds to a minute or two – and then I can take it from there. You see where it’s going to go in the first 30 seconds. Probably less than that.”

Fiend for the buzzer

The judges sometimes hold on for longer than they should to hit the dreaded buzzer that cuts auditions short. Louis Walsh is a fiend for teasing out the tension like this. He waits until one singer with limited range reaches the ambitious key change in I Will Always Love You before cutting her off and he lets another warble on for two verses and a chorus, causing Van Outen to try out her best Simon Cowell impression: “Maybe continue in your bedroom instead of in front of everyone.”

Walsh, by the way, is by and far the crowd’s favourite judge, with the children in the audience shouting for his attention between acts, probably knowing him from The X Factor and not for managing Boyzone or Westlife. And in his 17 years of judging on TV talent shows, his stating-the-incredibly-obvious style has not changed in the slightest. “You’re 15! You’re from Tralee! And it just flows,” he says like a caricature of himself to Charlotte, a classical singer from Kerry.

Finding talent is exhausting – so everyone fuels up during the break on tea and clingfilm-wrapped sandwiches from The TLT’s tuck shop – but the judges are putting a wide range of acts forward so that the live shows will be anything but. However, for the last audition of the day, the tone shifts from cheery to strange. Self-proclaimed “telepathy rock star” Eddie Dean is conducting PhD research in UCC on nonphysical communication, and for his act, he attempts to read the judges’ minds using a blindfold and picture cards and strips out of his tailored pinstripe suit down to his monogrammed jocks for … transparency? To quote a mystified Jason Byrne, “I was off me banger watching you”.

On Ireland’s Got Talent, anything goes and just when you think that the smallness of Ireland might make the auditions predictable, between stripping psychics, nervous parrots, multiple magicians and a nation of tiny dancers, this show finds a way to surprise you.