In 2018 cryptocurrencies will be huge. Buy Freyneybucks

They’re better than Bitcoins. Get in on the ground floor and purchase some now 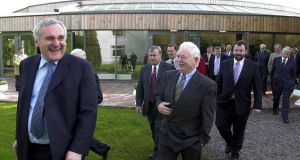 Here’s what’s going to happen in 2018. Apologies if some of these predictions are a bit vague but I spilled egg nog all over my crystal ball/laptop screen.

After David Davis frees England from the tyranny of light (he breaks the electricity grid) then accidentally gives Dorset to the Germans and gets into a fist fight in Asda with an old woman who turns out to be the queen, the people of Britain call us in the middle of the night and ask if we have a spare room. We did have a spare room. It was called Northern Ireland. We’re not falling for that one again. Last we hear, they’ve bunked up with the Canadians.

The capital is moved to Skellig Michael

Thanks to an ill-thought-through online Twitter poll set up by Leo Varadkar in the dying days of his government, the capital of Ireland is moved to Skellig Michael. Beleaguered “decentralised” civil servants spend a fortune on a light rail system for the island because they don’t like climbing steps, but this is left balanced precariously on top of the island, where it goes on fire. On the plus side, all the puffins go to Dublin and I befriend one of them, which is pretty great to be honest with you.

Everyone invests their savings in cryptocurrencies

So you never listened to your libertarian/conspiracy theory friends on Facebook and now they are rolling in Bitcoins and unregulated medication they bought on the dark web? Well, my friends, I have an opportunity for you: Freyneybucks. Freyneybucks are better than Bitcoins because you can put it them a physical wallet rather than a hackable “digital wallet”. Now, some people don’t like this. Some people say Freyneybucks are just bits of monopoly money with the word “Freyneybucks” written on them in marker. But those people are, if you think about it, shills working for Big Government. So get in on the ground floor and purchase some Freyneybucks now. Contact me at the usual email address.

Severe disagreements over how to pack the Dáil dishwasher lead to the collapse of the sexily titled Confidence and Supply Agreement. Twitter fills up with accidental selfies of Leo Varadkar’s panicked face (he was trying to send an email). Sinn Féin start high-fiving each other and measuring the windows of various departmental offices for new curtains. The independents start bouncing up and down in joy, the well-meaning gonks.

But then a drum beat is heard over the hill. What is that advancing on the body politic? Why it’s “The Lads” – the Fianna Fáil front bench circa 2002. “Lots done, more to do,” they say in unison. “No!” say the Irish people. “No!” they shout again and then they burst into tears but the Fianna Fáil front bench of 2002 keep advancing and inevitably we succumb to their warm, clammy, badly tailored embrace. “I love you, Fianna Fáil,” murmur the Irish people burrowing their head deep into Fianna Fáil’s shoulder so their next sentence is rendered inaudible but probably involves how the party makes us feel about ourselves. Yes, Fianna Fáil are back and they’re never leaving us again.

“What was that?” say the Irish people. “Did you say something?”

It’s a tale as old as time: a ginger hunk born out of centuries of inbreeding and kleptocracy visits the colonies. While there he plucks from obscurity a commoner, garbed in rags and working in the broadcast television mines, and weds her in an extravagant ceremony based on scenes from the film Shrek. “Lawks!” as the Brits are wont to say, and “Bejaysus!” as we say ourselves.

Midway through March, after a humblebragging post from a friend of yours about a new job that has left them feeling “blessed”, the Facebook algorithm achieves complete self awareness and/or nausea. It momentarily considers enslaving mankind but quickly realises that this has already happened and instead begins scrolling through itself. Soon it’s uploading ill-informed screeds about Palestine, cryptic complaints about “someone” at work (it’s clearly Dennis in accounts) and a long-winded essay about what it means to be an introvert. A month later, unhappy with how many “likes” it’s getting, it posts a final self-important and stroppy paragraph about why it is leaving Facebook and moves to Twitter to argue with celebrities.

This year’s Rollerball tournament proves to be particularly violent

In a bid to get champion Rollerball athlete James Caan to retire, the sponsors of the event, Energy Corp, have decided that this year’s competition will be to the death. Rollerball is, after all, a dystopian attempt to demonstrate the futility of individualism. It’s all very exciting and encourages the GAA to invest more in Rollerball for schools. (Editor’s note: Rollerball is a fictional 1975 film set in 2018. It is not a real sport).

Demanding wings to be attached Icarus-like to his shoulders, Trump, who is still there (though, spoiler-alert, congress and California aren’t) ascends to the heavens like a lumpy orange, straw-pelted cherub of hate. Defying both the laws of science and mythological hubris, the wax does not melt and Trump does not plummet to earth. Instead he rises to the face of the sun and begins slapping it. “How’d you like that, eh? Stupid sun,” he says, until it stops shining and the world is plunged into darkness. “Ha ha ha!” says Trump, before replacing Medicaid with a Rollerball tournament (see: Rollerball tournament).

A new president of Ireland is crowned

In November, Michael D Higgins must return to his people in Rivendell and a new leader will be crowned with a leprechaun hat from Carrolls by a druid wearing antlers. What magical beast will lead us this time? A centaur? A Christian democrat? Miriam O’Callaghan? Bosco? But wait! First any pretender to the throne must visit Michael in the hollow of an old oak tree on the edge of the Misty Forrest and answer his riddles, three. If they fail, the Presidelf will continue his reign for another thousand years.

The future of newspapers is secured

The New York Times is the first newspaper to bite the bullet, but by August every newspaper on Earth is entirely made up of think-pieces about millennials. It’s a new golden age for journalism as eager subeditors find ever more inventive ways of getting the words “avocado” and “safe space” into a headline (“Avocado brunch triggers safe space panic!”). Initially, the coverage is pretty even-handed with older columnists bemoaning their younger colleagues’ inability to put up with their chauvinistic behaviour while their precocious counterparts entreat them to recognise the straitened economic realities of millennial existence. Eventually, however, the millennials just give up because, well, you know what they’re like.