Fourteen years of fires, hostage situations, MRSA and ‘romps’ on this entertaining show 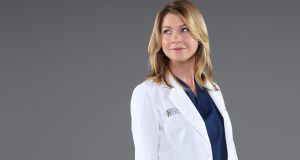 Pompeo plays the Meredith Grey of the title, Grey’s Anatomy, a title which suggests that all the characters live inside her head like the Numskulls from the Beano. Photograph: Buena Vista Television

Grey’s Anatomy (RTE1, Monday) has almost been around as long as its literary namesake Gray’s Anatomy (14 years and 160 years are basically the same thing to a Millennial like me). I was reminded of it recently by an excellently honest interview with Ellen Pompeo in the Hollywood Reporter, in which, among other things, she gave a gutsy defence of jobbing actors on network shows. It made me think.

“Grey’s Anatomy is still on,” is what I thought, if I’m being honest.

Pompeo plays the Meredith Grey of the title, Grey’s Anatomy, a title which suggests that all the characters live inside her head like the Numskulls from the Beano. Much as I would like to see this show, the Numskulls on Grey’s Anatomy live in a hospital.

They have been doing so for fourteen years now, breaking down social barriers for hot doctors with complicated personal lives. They’ve certainly changed my perspective. “I’m not letting easily distracted sexy medics treat me,” I might once have cried, absconding from Tallaght hospital in a revealing blue hospital gown. Nowadays, however, if my doctor isn’t smouldering at a hunky anaesthesiologist while reading my charts I get worried that they’re not fully committed to their career.

The hospital drama is a curious thing. MASH helped us see the funny side of gruesome medical procedures during war. House showed us that abusive unprofessional behaviour is fine if you’re a maverick genius who plays by their own rules. Nurse Jackie taught us where the drugs were kept. And this is important before rewatching Carry on Doctor where you can learn most of the rest of what you need to know about medicine.

With Grey’s Anatomy, Shonda Rhimes merged all medical tropes and created a bona fide international treasure. I have, over the years, watched so many medical dramas I’m pretty confident I could perform most operations (I’m also confident that I could represent myself in court, fly a plane and break a terrorist’s neck by grabbing his head in my hands and moving them slightly). And Grey’s Anatomy has a lot of history, so much so that it was floundering under it in recent seasons. More recently still, however, it’s been wearing its unavoidable recyclings more lightly.

In this week’s episode Meredith’s long serving psychiatrist ends up in the ER with a heart problem and she bends the poor man’s ear about her personal life until he has a heart attack rather than listen to her more. “You’re still here,” he says when he comes to after a chest-cracking operation.

Meredith actually seems quite happy given the death of her hunky husband Eroticus D Sexdoctor (Patrick Dempsey; I may have the character name wrong) in season eleven. His neurologist sister Amelia is still here, however, but she’s been hiding the fact she has a brain tumour. There’s a funny knowing bit where kindly Doctor Webber comforts her by telling her about his own brain operation seasons before and she mocks his tiny tumour was. “[My surgeon] would let me remove this tumour while he was removing mine.”

The future of the hospital is also temporarily endangered by the whims of crusty old philanthropist Harper Avery who is, no doubt, suspicious of the wave of shootings, hostage situations and fires that have plagued the institution that bears his name. Not that you’d know there was an existential threat what with all the romantic “romps.” One character is driven to seek passion in her life after treating a high school student who burned himself in a ridiculous romantic gesture. Maggie and De Luca reminisce about their love life in front of some romantic brain scans. Carina engages in saucy sex talk with Arizona near the check in desk. Alex and Jo have a gropey snog in a lift. “I hope they wash their hands,” is something I say a lot when watching Grey’s Anatomy.

All-in-all it’s wittier, weightier and more entertaining than it has any right to be 305 episodes in. You need a lot of clever writing to sustain a 24-episode, subplot filled network show like Grey’s Anatomy. It’s not like prestige cable drama, where viewers will put up with a tedious anti-hero waxing philosophical in the snow for an hour because it reminds them vaguely of reading a hard book.

Call the Midwife (BBC1, Sunday) features equally well-researched medical problems to chew upon, but featuring kindhearted stoics rather than individualistic Generation X sexpots. Oh, and it’s also set in the olden days. Not the olden days of leachings, bleedings and exorcisms, although I’m pretty sure there’s a market for such vintage techniques among hip young fools, but the olden days of great scientific progress and the early NHS.

It’s a programme that never shies away from the hard realities of birth and death, but which always puts them in the optimistic context of a burgeoning cradle-to-grave welfare state (something that still looks utopian when watching a US medical drama). This week’s birth is the unwanted child of a young stripper and its death is of an elderly Jewish refugee who dies in bed as the bulldozers of change roll towards her home. There’s also a new midwife, Lucille Anderson, from the West Indies, whose people, as another character reminds us, were saving the NHS. Throughout, grim living conditions and sadness are offset by uplifting string motifs and generous attitudes. It’s 1962. Things are getting better. The writers know it. The viewers know it. Even the characters seem to know it, marvelling at gizmos and historical events. The subtext, if you’re looking for lefty propaganda, is: Don’t let things get worse.

As you’ll know from the relevant section of your CAO form, the official “sexy professions” are “medicine” and “law” (and not journalism despite the byline picture above). Sadly, we have no hunky doctors in Irish drama now, but we do have dishy lawyers dropping law facts while slow-motion walking through law places. Striking Out (RTE1, Sunday) is still gamely trying to be the Irish answer to Matlock/The Good Wife despite its fatal flaw: the fact that its posh heroine Tara Rafferty (Amy Huberman) isn’t so much “striking out” as she is “nepotisming in” with her ever-useful family connections. I still have no idea if she’s any good at her job. I suppose that’s Official Ireland for you. Still, the show is coming into its own a bit. The extended cast are starting to rub off each other as believable, idiosyncratic people and this makes it feel better paced. I also liked the way new hunk-in-law Sam awes Tara by cradling a captured office mouse, much like Lenny from Of Mice and Men. I don’t think that it’s a great show, but I think that it could be a good one with time. So give it time, RTÉ. After all, Grey’s Anatomy has been on for 160 years.