Patrick Freyne: This is where the experiment in democratic self-governance has led

RTÉ sports commentator Marty Morrissey shows off his dancing skills, along side partner Valeria Milova, in the latest series of Dancing with the Stars. Video: RTÉ 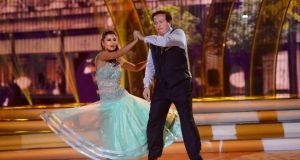 The revolving glitter ball is back. In the dark of winter we worship it like the sun, and this year the druids at RTÉ have found more people who will be forced to dance for it until mid-spring, at which point we will, presumably, eat them.

I already know who I want to win. By March I hope the glitterball will be replaced by Marty Morrissey’s twinkling face – it’s come a long way since it played the sun in Tellytubbies – and the word’s Dancing with the Stars will be scratched out and replaced with “Smarty Marty’s Dance Party”. I saw this headline in a newspaper earlier this week (not this one, sadly) and it seemed to portend the coming of a new age. A nightmarish age of darkness or a utopian one filled with light? Well, that depends on your views on Marty Morrissey. I imagine it will be a mixed bag, with increased sports funding but also the odd purge.

But I’m getting ahead of myself. The programme opens with professional dancers galumphing sexily and blowing stardust to the strains of Relight My Fire while the audience, procured from a 1980s edition of The Late Late Show, clap along out of time (you had one job to do, audience. One job). They are quickly joined by the “stars” who participate in these rhythmically complex high jinks. I can tell instantly that they’re not trained dancers, although Marty Morrissey does a sort of finger gun thing that makes me say “Niiice.”

Out come the presenters . There’s Amanda Byram, who once hosted US beautification/surgery show The Swan. Her unreadable face is framed by wavy hair curtains and she is wearing a dress that is black but features sparkles, much like her soul. She warns us darkly to prepare for the “the glitz and the razzle dazzle”. I put on sunglasses and close my curtains.

Though Nicky Byrne doesn’t quite know how to make a joke land correctly, he certainly crash lands them energetically

Byram is accompanied by Nicky Byrne, a tuft of wild grass jutting from his rectangular head, a tiny Communion jacket draped around his torso. This likeable chuckle-munchkin is now my favourite of the Westlifes and the one who has prospered most, I think, since Gargamel freed them from his lab. He possesses, legend has it, the power to grant wishes if caught, and though he doesn’t quite know how to make a joke land correctly, he certainly crash lands them energetically.

The judges are also there. There’s Brian Redmond aka “Mr Nasty”, so dubbed because he notices that the dancing isn’t very good. There’s Loraine Barry, the nice one, who is, in the best Irish spirit, pretending everything is fine. “Everything’s fine,” her posture seems to say, much like your mother at Christmas or successive ministers for health or those people you chat up in bars.

The one who dresses like a colourful piñata (Julian Benson) is ill this week and is thus replaced on the panel by a former Strictly Come Dancing winner named Darren. Darren’s okay but he doesn’t look like a rainbow got sick on a unicorn, so I’m instantly suspicious. He promises “blood, sweat and sparkle”, which makes me think that “the glitz and the razzle dazzle” foretold by Byram might actually be a new disease (“Me razzle dazzle is giving me gyp”).

Byram also announces that there’s a competition to win a trip to the US. To win you have to answer one of those multiple choice quiz questions that’s designed not to alienate even the plainest of the plain people of Ireland. You know, something like “What is your name? (a) Pope Innocent III (b) Warren G featuring Nate Dogg or (c) [insert your own name here].” Coincidentally, these are also the names of my nephews.

Then the dancing commences. Much like the deer in the Phoenix Park or the pay ratios in some media organisations, the dancers are split along gender lines. This week it’s the turn of the men, so the musk of testosterone, sweat, fake tan and sparkle applicator fills the studio. There are two approaches to “dancing with the stars”. For the male dancers dealing with female stars, it’s to twirl them like a baton. For the female dancers dancing with male stars, the trick is to dance around them, as though they were part of a dance-themed obstacle course. It’s also good for the dancers to be as distracting as possible, faking a fit or illness if possible, so that no one notices that their dancing partner is basically a vibrating plank with a face drawn on it.

The first up is athlete Rob Heffernan, who is really good at walking fast in one direction and dances accordingly. It goes well. He and his dance partner, Emily Barker, finish with their legs akimbo and their arms folded, looking over their shoulders as though they’re in a movie poster about a maverick cat who plays by its own rules.

Next up is Bernard O’Shea, who momentarily pretends to be Marty Morrissey (this will be remembered when Marty comes to power) and whose instinct is to jape. This is slapped down. “There is no laughing in tango,” says his dance partner, Valeria, outlining one of the many rules of this autocratic new world (the aforementioned Smarty Marty’s Dance Party).

One way the programme makers circumvent lack of dancing skill is to add dramatic scenarios. In fact, I heard that RTÉ’s drama department has been subsumed and that this is what we’re going to get instead of Love/Hate. Good. So rugby player Tomas O’Leary foxtrots over to partner Giulia Dotta apparently minding her own business on a bench. The theme is “park pest”. Later we get sports commentator and retired Mr Man Marty Morrissey quickstepping in Joe Dolan-soundtracked pursuit of a shopping-bag-carrying Ksenia Zsikhotska. He is surprisingly twinkle-toed and I would be lying if I said I wasn’t both moved and frightened by his erotic energy.

The female contestants aren’t competing in this episode, but they do perform a group dance together and thus get their spake in. “When you see everyone together you can see who are the strong ones and who are the weak ones,” says fitness guru Erin McGregor chillingly, clearly preparing to hunt the deadliest prey of all (celebrity). Then a song called Boy I Ain’t Your Momma plays and they’re all seen to perform domestic chores in an impractical albeit rhythmical fashion before abandoning such tasks to groove steamily with hunks. This dance is called The Second Sex by Simone de Beauvoir. It’s worrying. I peek through my curtains, wary of seeing hunks.

The judges are encouraging except for Brian, who can see what is happening to his beloved art form, and will eventually succumb to laudanum and ruin

We also get a performance from last year’s winner, GAA champion turned dancing fool Aidan O’Mahony, a bit in which boisterous dancers physically lift up flesh-Tintin (Nicky Byrne) and an impromptu closing dance that resembles a drunken wedding reception.

Throughout, the judges get their say. They’re encouraging except for Brian, who can see what is happening to his beloved art form, and will eventually succumb to laudanum and ruin. But we don’t have to kowtow to so-called “experts” any more. The people at home can also decide who they think the best dancer is, just like they get to decide who the best leaders and surgeons are.

Yes, this is where the experiment in democratic self-governance has led – to Smarty Marty’s Dance Party – and it is glorious.

Dancing with the Stars is on RTÉ One on Sundays at 6.30pm