Nicolas Cage is now being spliced into every film ever made

Thanks to FakeApp, the meme-friendly actor is on his way to becoming the biggest movie star of all time 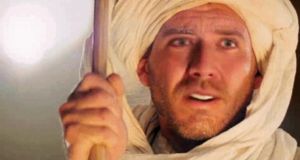 This week, the planet received a startling glimpse into the future of CGI and what it could mean for culture, geopolitics, and the noble quest to place Nicolas Cage in every single movie ever made.

Most people are familiar with face-swaps, whether the standard static images of Facebook yore, or those real time face-replacement filters on Snapchat, the kind you’re barred from showing your Auntie Pauline ever since she nearly choked from the laughter at Christmas. Now comes FakeApp; a new, more sophisticated tool which allows users to create even smoother full-motion video using much the same effect.

Cage may seem an odd choice to publicise this technology – he is, frankly, an odd choice to publicise a Nicolas Cage movie – but in a stroke of genius, dozens of FakeApp whizz kids decided the best vehicle to showcase their prowess is by insinuating the world’s most meme-worthy actor into a bevvy of cinema classics. So, with mounting delight, we got to see Cage as Indiana Jones, Lois Lane, Miley Cyrus and, perhaps most memorably, SNL’s Andy Samberg mid-Nicolas Cage impression.

The results are hilarious, decidedly uncanny and often disturbingly real. But perhaps the most jarring effect of the technology, and one that might give us pause for the future, is the work of a subreddit named Deepfakes.

Named after the user who first pioneered the technique, Deepfakes collects AI-generated pornographic videos in which adult performers’ faces are swapped with those of female celebrities. Although many of the offerings are rendered so poorly as to be borderline grotesque, some are incredibly smooth, raising serious questions about the content’s effects.

Like so many Nicolas Cage vehicles, one enters the world of FakeApp with high hopes of a good time, only to emerge a little bit more disturbed than delighted.