Got a problem? There’s a television show for that

Patrick Freyne: We’ve come to the point where we want TV to solve all our ills 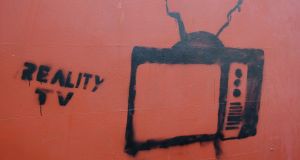 ''Fix us!' we demand of our TV screens, or Ryan Tubridy when we grab him by the shoulders on the street. 'Make us better!''

I fondly recall the day the algorithm chose for me a wife. It’s amazing what Facebook can do nowadays, with just your purchasing data, medical records and browser history as a guide. Yes, Ms TV Reviewer may just be a mirror image of me but with a gigantic bow on her head, like Ms Pac-Man, but we are very happy. So it’s surprising to me that people use old-fashioned forms of courtship at all any more, things such as Tinder, “leaving the house” and dating shows such as First Dates.

Even from its title you can tell that First Dates (Tuesday, RTÉ2) has an optimism missing from more jaded television programmes, such as Divorce Court Fracas, Me and My Cats and Darling, I Would Like to Introduce You to My New Tennis Friend, Geoff. (Full disclosure: I may have made up these shows.)

For starters it’s more naturalistic than other dating shows. This is because we’ve gone right through the phase of reality television where everyone wanted to be famous. Now we’re at the point where we want television to solve our problems – our financial issues, our renovations, our love lives, our gout. “Fix us!” we demand of our television screens, or Ryan Tubridy when we grab him by the shoulders on the street. “Make us better!”

This week’s prospective lovers include Andrew, who has an explosive hairstyle and who suggests that if cloning were an option he would date himself. Millennials, eh?

This week’s prospective lovers include Andrew, who has an explosive hairstyle and who suggests that if cloning were an option he would date himself. (Millennials, eh?) His actual date, Harry, has differently apocalyptic visions. “The worst thing that can happen on a date is that they kill you,” he says brightly. If this actually happened on First Dates the RTÉ budget restrictions would probably mean they’d still air it.

Andrew tells Harry that he likes surprises (probably not murder), and he conjures up an example. “[Someone says] we’re going to the beach, but they bring me to the zoo,” he says, proving, I guess, that what we want in a lover isn’t necessarily what we want from Dublin Bus.

Getting the important stuff out of the way first! #FirstDatesIrl pic.twitter.com/sCdHXDrCHt

And the night ends with a match for Tara and Eoin! 😍 #FirstDatesIRL pic.twitter.com/uWYraLF0Qh

Andrew is from Louth, and Harry asks with wonder if he lives in a housing estate. He’s heard that everyone lives in housing estates in Louth. A housing estate seems like the most exotic thing in the world to Harry. It leaves me with the impression that he lives in a giant peach or a huge shoe, but sadly we never get to his living arrangements. Instead he discusses pet ownership, of which he disapproves. I can see why. “Do you lick your dog?” he asks Andrew, who looks understandably perplexed.

There are other couples to spy on. There’s the fashion blogger Lawson and the American evangelical Christian Krista, already feeling like an old maid at the age of 24. There’s the soothing-voiced Longford psychologist Sarah, who “works in terrorism” (frankly, it’s political correctness gone mad having her on the show), and the Teutonic rule-follower Andreas, who daringly shares a dessert with her despite the menu not specifying that sharing is an option. (Andreas, I think, was arrested for this after the credits rolled.)

And then there’s Denise, who seeks “good craic”, and Stephen, who’s tired of being laughed at by women in bars. Stephen orders oysters from the blue-suited maitre d’, Mateo, who suggests the same meal to Denise. “It will get you into the same mood,” says Mateo, all but rubbing his legs and adding, “Hubba-hubba, vroom-vroom!” to the end of the sentence. Stephen has, it turns out, never eaten oysters before and ends up spitting his masticated mollusc out, much like a middle-aged infant. Denise laughs, but this is technically a restaurant, not a bar, so Stephen hangs in there. He is, to be fair, good craic.

After overhearing a discussion between the besuited culchie-pride activist Eoin and the student nurse Tara, the bearded barman, Ethan, asks Mateo does he know what “road frontage” means. “Is it a sexual thing?” asks Mateo, and Ethan explains that “road frontage” is, in fact, the amount of housebuilding land a country family might have facing a road.

So “yes” is the answer to Mateo’s question. It’s totally a sexual thing. We’ve all had filthy fantasies involving road frontage.

Eoin and Tara are by far the sweetest couple of the night. The conversations on First Dates are often unguarded and honest. Tara lost her partner to sudden-death syndrome several years ago, and Eoin’s heartfelt response to her story belies any notion that he’s anything other than a lovely, funny man. At the end of the night, in the awkward bit where the producers make them sit together to say whether they’re going to meet again, they arrange another date. Tara, Eoin declares, is daycent. (I’m allowed to use this pronunciation because of my culchie roots.) There’s a similar happy outcome for oyster-chugging Stephen and Denise. Poor Sarah gets a rejection from Andreas, who is probably still reeling from her recklessly lax attitude to dessert ownership.

The villain this week is Harry, who commits the biggest First Dates faux pas of all: making Andrew say he’d like a second date before then rejecting him. Harry says he couldn’t possibly go out with Andrew because Andrew conversed amiably with the waitress. Harry is as appalled by Andrew talking to a waitress as he is amazed by the idea of housing estates in Louth. So Andrew is left by himself, which is, luckily, his dream date. And Harry returns to the moon to ponder Earth, where people live in housing estates and talk to waitresses and the events of your love life are narrated like you’re in a David Attenborough documentary.

I’m always slightly troubled by the competitive health show Operation Transformation (Tuesday and Wednesday, RTÉ One). First, I’m struck by a lack of ambition in the transformative desires of the participants. I mean, no one comes out and says, “For my transformation, I’d like wheels,” or, “Give me an extra arm,” or, “Can I have tusks?” They all just want to be transformed into a smaller person.

Also, I find the programme’s yearly evolution into a countrywide mass movement slightly terrifying. “To hell with your fascist thinscape!” I shout instinctively while digging into a stale selection box. But, like First Dates, Operation Transformation is often moving in the way it allows us insights into people’s lives. The tone is compassionate, not judgmental. There are, after all, understandable reasons why hassled, busy people such as Garda David Cryan, looking after a child with cerebral palsy, might have let his own health slide. So, in the absence of the sort of tax-heavy, service-based healthcare solutions this raving socialist would like to see, Operation Transformation is a well-meaning enterprise.

Give everyone in the country a panel of four celebrity experts and a big comedy weighing scales and we’ll be grand.