How Animals Work: Putting the yeeeugh into yoof TV

Review: The RTÉ show should really be called What Animals Look Like When Turned Inside Out – and Isn’t It Disgusting? 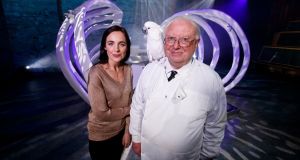 How Animals Work: who thought it would be a good idea to install Ella McSweeney and Prof Peter Wilson in front of what look like a pair of giant, wobbly whale ribs purchased from Dealz?

Like a ratings-obsessed amoeba, natural-history television has over the past several years bifurcated into two distinct entities.

The first, correctly referred to as Blockbustericus attenboroughcus, typically brims with eye-wateringly gorgeous cinematography and is narrated by Sir David of the plummy intonation.

The second belongs to a new category of whizz-bang “event” telly. This has been all the rage in the UK, where viewers have thrilled to Bill Oddie cooing about badgers and lichen on Springwatch. (Ironically, badgers and lichen will be the UK’s staple diet after its no-deal Brexit.)

How Animals Work, on RTÉ One, is very much in column B. It also suffers from a slightly misleading title. A more truthful one would be What Animals Look Like When Turned Inside Out – and Isn’t It Disgusting?

“To warn you, these programmes feature strong dissection scenes,” announces its host Ella McSweeney. The camera cuts to a Bayeux Tapestry of offal. Later, a lizard with eggs intact, a salmon with innards glistening under the studio lights, and a disembowelled eel are all slapped on a slab for our supper-time entertainment.

The slicing and dicing is courtesy of McSweeney’s old university professor Peter Wilson, of Trinity College Dublin’s zoology department (and former director of Dublin Zoo). He’s an excellent raconteur and a seasoned scalpel-wielder. But who thought it would be a good idea to install him in the middle of what look like a pair of giant, wobbly whale ribs purchased from Dealz?

“A fair amount of fat in this beastie,” he says, getting stuck into the lizard. “A lot of intestine there… This is the liver here. Here is the heart in the pericardium. The heart of reptiles like this… it’s interesting, because it doesn’t have two ventricles. It has one ventricle and two auricles.”

I don’t know whether to turn green and open a window or reach for the copy of Gray’s Anatomy I keep by the television. Still, I’m glad I stay with How Animals Work. Later on there’s a bit in which a snake fights a balloon. (The snake wins.)

Could RTÉ have educated us about the inner workings of our scaly friends without accidentally remaking an early David Cronenberg film?

McSweeney is regarded as something of a shining light in natural-history television. She has presented shows for RTÉ and the BBC and has written for the Guardian. What a shame she isn’t given more to do here. She’s restricted to some voiceover work and a smidgen of on-the-ground reporting from Smock Alley Theatre, in Dublin, where the squishy bits are shot in front of a mildly stunned audience.

An even more pertinent question is whether RTÉ could have educated us about the inner workings of our scaly friends – the lizards and fish feature in what is the first of four episodes – without accidentally remaking an early David Cronenberg film. The prewatershed slot suggests RTÉ has at least half a (sliced-up) eyeball on a younger audience. If that’s the case it must be commended for putting the yeeeugh into yoof TV.

9 No light in sordid fable of heroin boss Felloni