Weekend TV guide: 7 of the best shows to watch

The big business of Blarney Castle, plus acclaimed Fosse/Verdon miniseries, John Cleese in Hold the Sunset and the return of Danish thriller Below the Surface 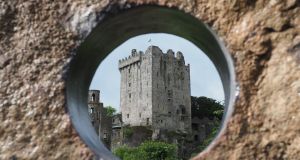 Blarney: A Year on the Estate, Sunday on RTÉ One

Mortimer & Whitehouse: Gone Fishing
Friday, BBC2, 8pm
The first series of Mortimer & Whitehouse: Gone Fishing was one of the surprise gems of 2018, as comedians and friends Bob Mortimer and Paul Whitehouse mused on the big and small questions of life on various riverbanks. Here experienced angler Paul once again tries to teach Bob the finer arts of fishing, while Bob takes charge of booking their accommodation. The opening episode finds them at the river Usk in Wales, where Paul’s father first taught him to fish. That prompts them to discuss their childhoods and reflect on their family lives and values, though they find time to try to catch a wild brown trout.

Not to be confused with Frost/Nixon, this eight-part drama tells the story of one of the greatest Hollywood partnerships , if not quite up there with Bogie and Bacall or even Burton and Taylor. Bob Fosse (1927-1987) was the visionary dancer, choreographer and film-maker behind such classic movies as Cabaret and All That Jazz. Gwen Verdon (1925-2000) was the Tony Award-winning dancer and actor who became Fosse’s collaborator, muse, wife and eventual guardian of his legacy. The series, which was nominated for 11 Emmys and stars Sam Rockwell and Michelle Williams, promises lots of Fosse’s choreography.

Your kids, they f*** you up eh? There you are, getting ready to spend your twilight years basking in the sun, when your 50-year-old son comes along and kicks sand in your dreams. John Cleese stars in the second season of the comedy series, playing pensioner Phil, whose plans to marry his girlfriend Edith (Alison Steadman) and move abroad to sunny climes are put on hold after his son announces that he’s left his wife, kids and job, and is moving home to “find himself”. So Phil and Edith must defer their dreams – although obviously time is not on their side.

Below the Surface
Saturday, BBC4, 9pm

The Danish thriller (original title: Gidseltagningen) returns for a second season. Now on extended leave from the police, Philip Norgaard (Johannes Lassen) is contacted by June al-Baqee (Yasmin Mahmoud), a Danish national who has been prosecuted for fighting against Isis in Syria, stating she has evidence of Danish involvement in the Syrian war. However, as she waits to meet the detective, she is kidnapped. Philip follows June’s trail to the ferry between Denmark and Sweden, andhe warns the captain that a kidnapping is taking place onboard.

Egypt’s Greatest Treasures with Bettany Hughes
Saturday, Channel 5, 9pm
Historian Bettany Hughes explores one of the world’s oldest and most mysterious civilisations. In search of her top 10, Prof Hughes travels from the mouth of the Nile to the shores of Lake Nasser. Along the way, she checks in on the Great Sphinx, the original location of the Rosetta Stone, the Valley of the Kings, the Great Pyramid at Giza and a temple whose walls tell the story of Egypt’s final female pharaoh, Cleopatra. She also meets experts and Egyptologists who are shedding new light and providing fresh perspectives on these treasures.

Blarney: A Year on the Estate
Sunday, RTÉ One, 7.30pm
Mention Blarney Castle and you immediately think of the famous stone granting the gift of eloquence to all who kiss it. But there is much more than just that famous stone – There are huge gardens to maintain, a working farm, horses to prepare for events, a massive forestry to look after, 60+ members of staff and thousands of international tourists to keep happy. With unprecedented access, filmed over a year, this unique documentary goes behind the scenes too see the work that has to be undertaken to keep the Cork estate up and running

All You Can Eat: Secrets of the World’s Mega Buffet
Sunday, Channel 5, 9pm
The JRC Global Buffet is one of Britain’s biggest restaurants, capable of feeding 3,000 people a day from a menu of 350 dishes. Diners consume 2,500 spring rolls, half a tonne of chicken and more than 1,000 tubs of ice cream every week. This documentary reveals how staff keep the place going and making a profit while allowing diners to eat as much as they want for a set price. Frankly it’s a slightly terrifying set-up that resembles a factory rather than a restaurant. But perhaps the most unpalatable part of the organisation is the waste: the eaterie’s floor team clear away some 65 tonnes of unwanted food every year.