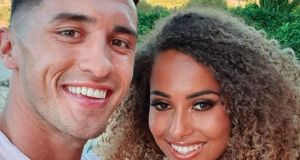 Irishman Greg O’Shea has been crowned the winner of Love Island, walking away with £50,000.

The Limerick rugby player and his partner Amber Gill beat out three other couples who made it into Monday night’s final.

Following the win, O’Shea and Gill were handed an envelope each, one containing £50,000 and the other containing nothing. O’Shea got the one with the money but he agreed to share it with his partner.

They’ve not stopped smiling since they first set eyes on each other... Amber and Greg are your #LoveIsland 2019 winners! ❤️🎉 pic.twitter.com/3pEd9nbMGc

The cash is likely to be dwarfed by the money the two are expected to make from endorsements, advertising and appearance fees following their success on the show.

O’Shea told Love Island Host Caroline Flack he was “speechless” to have won. Gill said it has been a “rollercoaster of emotion” and that she had instantly “clicked” with the Limerick man.

O’Shea (24) plays professional rugby and is a member of the Ireland men’s 7s squad. He is a former competitor in the Youth Olympics.

He was a late arrival in the Love Island villa but quickly became a popular contestant even before coupling with Gill.

Asked to rate himself out of ten, he said: “I broke my face a couple of months ago through rugby so I had a broken nose and a cracked forehead! Before that happened I would say I was an eight . . . but now I’d dock myself down to a seven with the broken face. The lads always say I give the girls a cheeky smile so that’s probably my best feature.”

The hit TV show, which aired on ITV2 and Virgin Media 2, has been running for five years but it is only this year that it had garnered a widespread following in Ireland, a factor attributable to the presence of three Irish contestants.

This season has attracted a peak UK audience of eight million while nearly 300,000 people have watched in Ireland, ratings comparable to the RTÉ Nine O’Clock News.